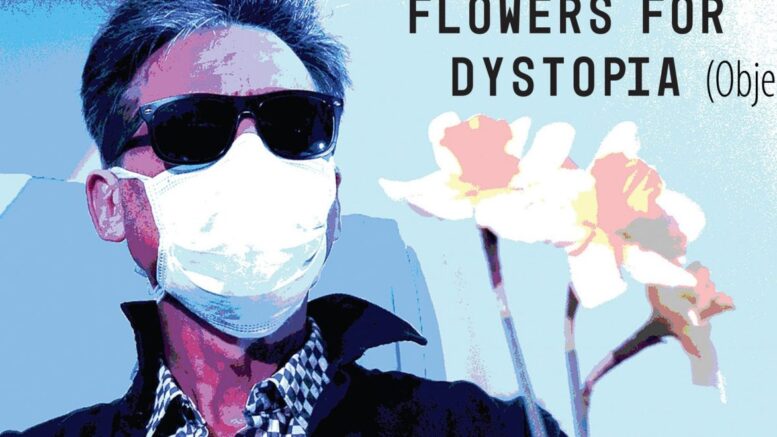 Please Share This Story!
PDF 📄
Historically, music and art have always reflected the culture within which they were created, and “The Great Dystopian Panic of 2020” is no exception. Les Techno has released a new album, Flowers for Dystopia, that paints a bleak picture of the present rather than the future. ⁃ TN Editor

We’re beginning to see the first wave of albums conceived and recorded during the pandemic and consequently, the first set of albums with the pandemic as a theme. This shutdown was bound to provoke topical art just as the first half of the Forties produced its fair share of war tunes. The latest offering from New York City-based post-punk electronic rocker Les Techno comes right out and says it with the artist adorning his cover with a facemask, offering a sarcastically paltry bouquet. However, the story that is told traces a much bigger through-line, framing the COVID crisis as the next step in a chain of causality. Sure, it was a once in a century pandemic event but the terrible mismanagement of it further exposes a dismantling of social institutions that maintain societal stability that has been happening for decades. This combined with our rapidly developing technocracy and maniacal partisanship shows the country barreling inexorably into a very bleak future. Techno’s stark portrait of American life is not dystopian future, it’s dystopian present.

Contrary to the dour subject matter, Flowers For Dystopia in refreshingly lively. Much in the same way that artists repurposed 50s do-wop musical tropes at the beginning of the 80s, Les Techno is reviving the pumping sound of mid to late 80s rock with a loving reverence. Snappy drums and clapping hands echoing with crisp, airy reverb. That punchy “chicka-chicka” of a shiny Stratocaster rapidly flickering while the bass slyly makes moves below. A voice that strides the line between crooning baritone and bedroom whisper. Though Techno pulls from many influences, the DNA from Aussie outfit INXS seems the most closely linked.

The opener and title track successfully brings this formula from Hutchence & Co. back to life. The narrator takes a good look around at his life to find possessions taking the place of connections. He clamours to reach out and touch people but this disconnection with humanity keeps driving the divides between us. Techno’s voice and chopped guitar echo into the spaces in between. ‘Eye On You’ follows with a broodingly swinging blues that brings to mind Depeche Mode’s early 90s rock-leaning output. The song tracks an artificial intelligence falling for a real human, incorporating an ability for lust into its programming. The stalking element and the watcher being watched finds parallels with The Stooges ‘TV Eye’ lyrically. A new take for a new century.

‘Is It Real’ is another prime example of late cold war, West Berlin kitsch. The delayed guitar stabs and bubbling mono synth flanked by vintage drum machine whirs craft a very specific vibe that has not been so successfully used since The Wall still stood. The narrator questioning the existence of an objective reality and by consequence, his sanity is an Orwellian theme that many of us are feeling today, long after that foul year of our Lord, 1984. For the B side of the album, ‘Come Along’ and ‘Guilty Pleasure’ take a more playful approach. The former locks in on a “Fine Young Cannibal snare” and freeze frame echo guitars along with a landline-toned lead. The latter lays its foundation on a steady-rolling kick and rising bass while Techno muses on fantasies.

Flowers For Dystopia has strong parallels with the 80s, not only in sound but in themes as well. The looming danger of the doom courted by right-wing politicians while ruling the western world is palpable once again. Blatant disregard for decent humanity being trumped by corporate greed and nationalist militarism is once again the current of the moment. It’s no wonder that someone who’s life skyrocketed during the avarice 80s is now bringing those devastating societal principles to run the States. Les Techno’s record dances in the face of dark times.

99% of what is being done today is NOT MUSIC!!!! It’s almost 100% CRAP! ‘Pop’ ‘music’ is for the dumbed-down masses! ALL CIA-created to DEGRADE Society. (the same goes for ‘modern art’; ‘modern’ buildings are BUTT-UGLY too!)

You should check out my album from 2016 MY AMERICAN HEART by Steve Grandinetti, truly prophetic