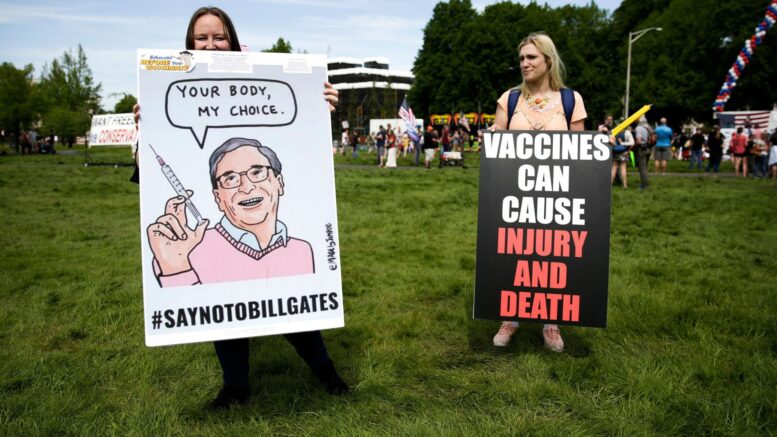 Please Share This Story!
PDF 📄
The corona-driven Technocrat coup d’etat is at risk of collapse as masses of people around the world are rejecting the notion of mandated vaccines. In England, 65% will reject the upcoming vaccine but surprisingly, younger citizens were twice as likely to reject. ⁃ TN Editor

A recent survey by King’s College London and Ipsos MORI showed only 53 percent of the UK population are “very likely” to get the COVID-19 vaccine, once it’s on the market. Younger voters were twice as likely to oppose the vaccine in the poll of 2,237 people aged between 16 and 75. To gauge readers’ views on the topical issue, Express.co.uk conducted an exclusive poll asking: “Should Britons be forced to have the coronavirus jab once it is developed?

Sixty-five percent (2,906) of respondents said no, with many saying they would have to be dragged kicking and screaming to have the vaccine administered.

Thirty-four percent (1,617) said a compulsory vaccine programme should be rolled out across the UK, one of Europe’s hardest-hit countries since the beginning of the pandemic.

One reader said they would not feel safe having a coronavirus vaccine injected into their body because they simply cannot trust pharma giants.

They said: No vaccine, whose manufacturer demands an indemnification, can be trusted.”

A second person said any attempts to force a vaccine on Britons as the country returns to the new normal would cross a dangerous line in the sand.

They said: “Forced vaccinations will mark the transition of Britain from a representative democracy into a totalitarian technocracy.”

And yet a third said if a person did not wish to avail of the virus vaccine but was pressured to do so it would amount to assault.

The reader wrote: “Forced vaccination would amount to physical assault upon the person.

“And those attacked in such way would be fully justified in using whatever means to defend themselves from such assault, as I will do.”

I certainly won’t take the vaccine!

Forced Vaccinations is what they’ve been aiming at all along. And, make no mistake, if we let them even start their program, it will become an annual vaccination ……. and who knows, once we’ve been conditioned, we won’t even ask what’s in the 4th or 5th year’s vaccine. And they won’t be dying from the flu or a corona virus, it will be from all the other diseases, because of our compromised immune systems ….. so they’ll have an out ….. we won’t be able to pin it conclusively on them.

Yes of course the idiots rather go to prison….. and there get same Dr Gates RNA eugenics vaccine crap! How the hell can people be so fxcking stupid to argue like that unless completely brain washed!

We need to use other measures. They are beeing constructed around the world.
It can be peasefull and it can be violent, it does not matter. This is a war we have to win.
The worst thing we can do is to let us divide by anything and everything. We need to go straight for the leaders

That answer is in the Bible. Mark 8:36 – For what shall it profit a man, if he shall gain the whole world, and lose his own soul? Or what shall a man give in exchange for his soul? Those who will refuse are the wise ones. The ones who will take it, are the brainwashed ones. Mark of the beast: ID 2020 combination vax/patch system. If you take it, you will lose your soul spiritually and never be able to be with the Lord or go to heaven. You will have forfeited your soul to satan. NOTHING IS WORTH… Read more »

YOU’LL HAVE TO KILL ME BECAUSE I AM NEVER TAKING ANY INOCULATIONS
NOT IN THIS LIFETIME, AND TAKE YOUR MASK/MUZZLE AND TEST AND RAM IT UP YOUR RUSTY SHERIFFS BADGE.
TO THE CRIMINALS IN WESTMINSTER AND THEIR PIMP BILL GATES JOG ON

Absolutely, totally agree about the vaccine. I wear a mask now because I am literally in “enemy territory” and it’s simply easier to be disguised as a “local”. We are going to have to remove these criminals in power — sooner would be better than later.

INSIDER INFORMATION – WARNING!!! Within 10 years people will begin to die of the vaccination. The corona vaccine is constructed that way.
DON’T tak IT.

Ipsos MORI is latin and translates THEY DIE. There you go. They work with GOV and supplying the fraudulent tests. Says it all. You need just 2 working brain cells to see what is happening.
https://www.ipsos.com/ipsos-mori/en-uk/major-home-testing-programme-coronavirus-will-track-levels-infection-community

couldn’t tell my dad of my fears but some years ago he had a flu vaccine and within 4 days he was dead. got him to take feverfew for migraines which worked so well that he stopped getting them – but that was as far as it went science is a very inadequate human construct to counteract nature we can only follow nature and get a feel of it when sars happened, at the same time star anise (used by eastern peoples to treat colds and flu) had a huge harvest this year in uk huge harvest of hawthorn berries… Read more »

They are being punished for Brexit. And I stand with them 100%. Sovereignty of nation and individual body/mind.