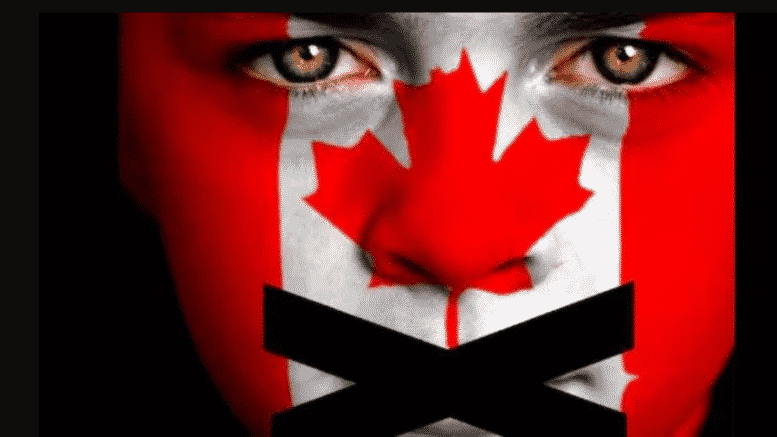 Please Share This Story!
PDF 📄
Technocrats constantly posit Free Speech for me but not for thee. The fact it that the only thing holding Technocrat tyranny at bay in the U.S. is the First Amendment and the aggressive exercising of those rights. When people are silenced, the crushing begins.

Coincidentally, this exact point is discussed in the CFFS Stand and Deliver podcast to be released at noon on Friday, Feb. 17th. ⁃ TN Editor

Trudeau, the boyish, blackface-wearing prime minister of Canada, views himself as an oppressed underclass. His oppressors are Canadian truckers — working people with concerns about his vaccine mandates and his long-standing border lockdown. He believes that by staging a protest in his capital city of Ottawa, the truckers are committing treason — or something very close to it.

For parking their trucks outside Parliament, making noise, and engaging in civil disobedience, these truckers have been accused by Trudeau and his fellow Liberal Party comrades of “insurrection.” He has accused them of attempting to overturn an election. He has threatened violent crackdowns and treated them as if their protest is not a protected activity. He has sent the police out to steal their fuel in hopes that the Canadian winter will do the rest and cause them to pick up and leave.

Trudeau’s government is invoking emergency powers that, in the past, have only been used in times of war and against terrorists. Canadians expressing support for the truckers on Facebook are even receiving visits from the provincial police at their homes — the People’s Republic of Canuckistan is apparently more than just a jokey name.

Some left-wing American journalists and commentators have been even worse, openly urging violence and property destruction as retribution for the truckers’ act of civil disobedience against Trudeau’s regime. Nothing makes leftists angrier than when their own tactics are used against them.

In American terms, the Left’s hypocrisy on this trucker protest can be illustrated through comparisons to the Occupy Wall Street protests of more than a decade ago. Love them or hate them, most decent people did not want to see the police march into the parks and beat the occupiers silly with billy clubs. The media even nauseatingly insisted on taking them seriously even though it was too much for most normal people to be lectured about inequality and economic hardship by a gaggle of privileged white college kids who had never experienced either.

From a Canadian perspective, however, there is a much more apt comparison than Occupy for what Trudeau is doing now. Most Americans might not remember or know about this, but credit the New York Times editors, of all people, for bringing it up. Specifically, in November 2020, Trudeau spoke out in favor of a farmers’ protest in India that had fouled up New Delhi highways for a year. When Indian authorities cracked down, Trudeau was happy to get up on his high horse, volunteering Indians and Prime Minister Narendra Modi to suffer the consequences of road-blocking civil disobedience with the equanimity that a free society requires.

“Canada will always be there to defend the right of peaceful protest,” Trudeau even said. Wow, that quotation is really a howler now, isn’t it? Peaceful protest is great — just don’t try it inside Canada, and you’ll stay on Comrade Trudeau’s good side.

One need not agree with the truckers’ cause to understand the danger that Trudeau’s dictatorial behavior poses to the rights of free speech and assembly. Clearly, like their southern neighbors, Canadians made a mistake in their last election.

And unfortunately, they do not have the First Amendment to protect them from power-hungry tyrants like Trudeau. They could really use one.

And only our 2nd Amendment protects the 1st Amendment and a stand against a government gone crimminally rogue. While the 2nd does allow us to protect ourselves from the citizen criminal it’s more important function is to protect us from a criminal behaving government. It’s all called freedom folks.

Only a moron believes that the First Amendment, or any other part of the Constitution, is still in effect.

Your’e still speaking aren’t you? You describe yourself then

Once again, I have to explain that Trudeau wears blackface to mock white Canadians. He hates the founding peoples of Canada who are all Caucasian. He loves the non-whites, which is why he mass-immigrates them to replace the British North Americans who pioneered and founded Canada. Trudeau’s blackface and brownface escapades are intended to ridicule the whites by showing that he identifies with non-whites who are replacing the whites, as his father in 1962 planned while writing in his Marxist review, CITE LIBRE, and Trudeau prefers the replacements.

I’d like to hear how the more than 725 political prisoners from the January 6, 2021 demonstration feel about this. To me, it seems that we have the same as Canada–just implemented differently. People arrested because the “rulers” don’t like their politics. Check. Their finances are ruined. Check. The “rulers” and their PR department — aka, MSM — have vilified them and told lies about them. Check. Let’s watch and see over the next few weeks how many other countries follow suit and put their knees on the necks of those whose politics they don’t like.