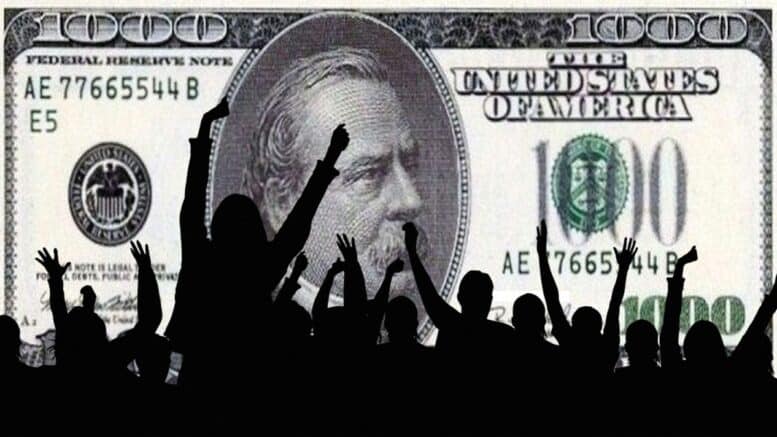 Please Share This Story!
PDF 📄
Presidential candidate and Technocrat Andrew Yang shocked voters with calls for Universal Basic Income, but now it has entered the mainstream of political thought. UBI was an original concept created by early Technocrats in the 1930s to ensure that all citizens were paid equally for their contribution to society. ⁃ TN Editor

When the idyllic upstate city of Hudson, New York, launches its basic-income pilot program in late September, it will become one of the smallest U.S. cities to embrace a policy once seen as far-fetched or radical.

“Basic-income” programs — designed to dole out direct cash payments to large swaths of people, no strings attached — were, until earlier this year, largely the realm of Washington, D.C., policy wonks and West Coast futurists.

But amid the pandemic and a global recession, both basic income and a basket of related policies have gained unprecedented momentum, surfacing everywhere from Capitol Hill to community Zoom meetings in cities like Hudson.

At their most targeted, such programs essentially function as a type of cash welfare, providing a flexible, fungible benefit to low-income Americans. In broader and more ambitious proposals, so-called universal basic-income programs would send cash to everyone regardless of income level — a feature intended, advocates say, to promote consumer spending, lessen the stigma of welfare and protect all workers against future economic upheaval.

Critics from both sides of the political spectrum have historically challenged such programs on the grounds that they cost too much money or don’t always reach the neediest recipients. But since the pandemic began decimating entire sectors of the U.S. economy, that logic has shifted.

In June, a coalition of 11 Democratic mayors from across the country announced the launch of Mayors for a Guaranteed Income, a national campaign that plans to invest in basic-income pilots and lobby for related policies at the state and federal levels.

Fourteen additional mayors have since signed on to the project, representing cities as diverse as Shreveport, Louisiana; Holyoke, Massachusetts; and Los Angeles. In July, Twitter CEO Jack Dorsey pledged $3 million to the group to pay for future pilots. Writing in Time to announce their coalition, the mayors called basic income “a policy solution that is as bold as it is innovative and as simple as it is ambitious.”

In Hudson, two nonprofits — with the blessing of the mayor and the county social services department — plan to mail monthly $500 checks to 25 people, chosen by lottery, for the next five years.

Further afield, nonprofits and volunteer networks also have given millions of dollars to hundreds of thousands of laid-off American workers as part of charitable cash-transfer programs. While such one-off grants are not “basic income” in the classic sense, advocates say they still express a new willingness to embrace unconditional cash payments as a part of the safety net.

Several states, including New York, California and Pennsylvania, have passed or are considering bills that would refund more cash to low-income workers by way of an expanded Earned Income Tax Credit.

Meanwhile in Washington, six separate bills in Congress would direct new cash aid to Americans, whether through a second round of one-off stimulus checks or a series of regular payments. The first round of stimulus, authorized in March, prevented national poverty levels from surging, two studies suggest, and was championed by both Democratic and Republican lawmakers.

Now the challenge, for long-time basic-income proponents, is translating this sudden spike of interest into permanent changes to the safety net.

For yourselves know how ye ought to follow us: for we behaved not ourselves disorderly among you; Neither did we eat any man’s bread for nought; but wrought with labor and travail night and day, that we might not be chargeable to any of you: Not because we have not power, but to make ourselves and ensample unto you to follow us. For even when we were with you, this we commanded you, that if any would not work, neither should he eat. For we hear that there are some which walk among you disorderly, working not at all, but… Read more »

And you Christians bible loving people cannot even agree amongst your own. How many sect does Christianity have and they all claim to have the Truth lol don tmake me laugh.

As an employer finding employees is more difficult if not impossible than ever because through many government agency’s they are being taken care of while they sit at home (rent free) and smoke pot. Yes that is why pot was legalized people to get the citizens to conform/comply to the new reality. The new Nazi propaganda is working. Since we have become a secular society and godless (believe not the God of the Bible) but government is their savior now and they will soon see how they lied and left you destitute. My suggestion is this: Seek the Lord while… Read more »

some of the best workers i know smoke pot. me included.

god off the bible is the same control mechanism that governments use plus vatican church is involved with big corps and governments. Fear just like how religions use it it is same as governments.

There are many manipulated texts in the bible just like how government manipulates facts. Bible is not the bona fide truth none are.

You seem to contradict yourself as even your bible god says..

Thats what pot is a medicine when used correct. Jesus used cannabis in his anointing oil,
Also Rastafarians also a christian sect use Pot to connect to god.