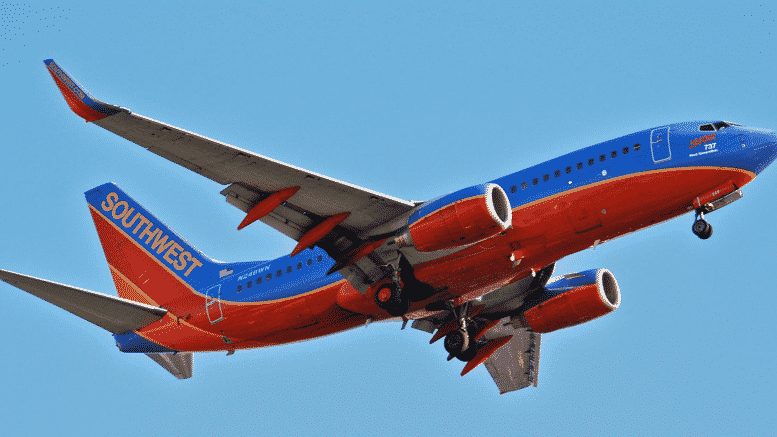 Posted By: David Slotnick via The Points Guy October 14, 2021

Please Share This Story!
PDF 📄
Approximately 25-30 percent of pilots and airline workers remain unvaccinated and risk being fired. Airline executives cite obedience to Biden’s Executive Order that has failed to materialize in the Federal Register. This means that they are essentially following a press statement that has no substance whatsoever. ⁃ TN Editor

Southwest Airlines said Monday that it would implement the federal vaccine mandate announced by President Joe Biden, disregarding objections raised most prominently by its pilots’ union.

The mandate, which Biden announced as part of an executive order, would require companies with more than 100 employees to implement vaccine requirements, with weekly testing available as an alternative. Federal contractors, however, do not have the testing exemption. Most commercial U.S. airlines, including Southwest, have numerous contracts with the federal government.

Southwest said in a statement Monday that it would comply with the order and implement the requirement, rather than seeking an exception for the airline industry or suing the Biden administration in an effort to block it.

“Employees of Southwest Airlines must be fully vaccinated against COVID-19, or be approved for a religious, medical, or disability accommodation, by Dec. 8, 2021 to continue employment with the airline,” Southwest said in a press release. The airline declined to elaborate on what would happen to employees who did not meet the deadline.

Pilots unions at American Airlines and Southwest Airlines warned last week that an exodus of pilots could occur if the federal vaccine mandate is implemented at airlines, potentially causing mayhem during the holiday travel period.

About 30% of American Airlines pilots are unvaccinated, the pilots’ union, the Allied Pilots Association (APA), said last week, citing medical reasons and reluctance. Southwest Airlines, headquartered a few miles away from American in Texas, has not said what percentage of its pilots are vaccinated.

“We are also concerned that the Executive Order’s anticipated 60-day implementation period for mandatory vaccinations could result in labor shortages and create serious operational problems for American Airlines and its peers,” APA president Captain Eric Ferguson wrote in a letter to the Department of Transportation and the White House. “Airlines generate a substantial portion of their annual revenue during the holiday period, with a great many travelers depending on us to get them to their destinations. Our nation’s airlines, and the traveling public, cannot afford significant service disruptions due to labor shortages.”

The Southwest Airline Pilots Association (SWAPA) called for an exemption to the order for pilots.

“Our pilots have shouldered an elevated risk of illness from the start of the pandemic, including well before the vaccines became available,” SWAPA said in a statement last week. “And we are hopeful that our contributions are recognized and accounted for as we seek approval of an alternate means of compliance and an operationally feasible implementation period.”

American has similarly said that it would follow the Biden administration’s executive order.

“While we are still working through the details of the federal requirements, it is clear that team members who choose to remain unvaccinated will not be able to work at American Airlines,” top executives at the airline wrote in a letter to employees on Friday.

United Airlines was among the first major companies to require vaccinations among its employees. More than 97% complied with the order, with several thousand seeking medical or religious exemptions, and less than 1% refusing to comply. The airline has begun the process of firing those employees, who number in the low hundreds, CEO Scott Kirby said at a conference on Monday.

Delta Air Lines said that it is still examining the details of the executive order, but previously implemented a rule that unvaccinated employees must undergo weekly testing and would be subject to a $200 monthly surcharge on their health insurance premiums. The airline said that about 84% of its workers were vaccinated, up from 75% when the surcharge was announced.

I do hope the pilots stand their ground. It will bankrupt the airlines if they do. There will be no air travel without them and the ground staff to guide the planes.

SW and the others can stick their Federal funding where the sun don’t shine.