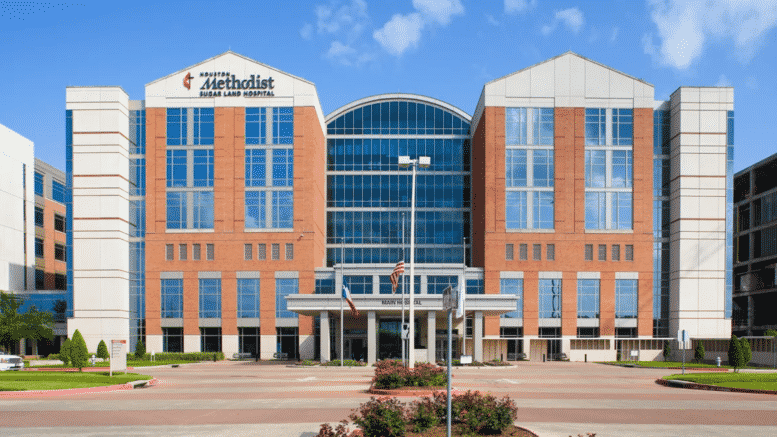 Please Share This Story!
PDF 📄
Across the entire spectrum of essential industries, we can expect that shortages of employees over vaccine mandates will create chaotic interruption of services. Some claim these are unintended consequences. However, Technocracy and Technocrats have implemented these policies as a scorched earth economic meltdown that is necessary for them to “build back better”. ⁃ TN Editor

Houston hospitals have “reached a breaking point” amid a COVID-19 outbreak, which struck weeks after 150 hospital workers were fired by Houston Methodist hospital, one of several hospitals struggling.

Jennifer Bridges knew what was coming when her director at Houston Methodist hospital called her up in June to inquire about her vaccination status.

Bridges, a 39-year-old registered nurse, responded “absolutely not” when asked if she was vaccinated or had made an effort to get vaccinated. She was terminated on the spot.

Bridges was one of more than 150 hospital workers fired by Houston Methodist hospital.

“All last year, through the COVID pandemic, we came to work and did our jobs,” said Kara Shepherd, a labor and delivery nurse who joined Bridges and other workers in an unsuccessful lawsuit. “We did what we were asked. This year, we’re basically told we’re disposable.”

Shepherd and her colleagues may be disposable in the eyes of hospital administrators, but they are perhaps not as easily replaced as she or Houston Methodist thought.

Two months after firing unvaccinated hospital staff, Houston Methodist is one of several area hospitals experiencing a severe shortage of medical personnel. Media reports say hospitals have “reached a breaking point” because of a flood of COVID-19 cases.

In an editorial published Tuesday, the Houston Chronicle said the 25-county hospital area that includes Houston had more patients in hospital beds—more than 2,700—than at any point in 2021. News reports make it clear that hospitals are struggling to keep up.

KHOU-11, a local news station, says medical tents have been erected outside of Lyndon B. Johnson Hospital but are vacant because of a shortage of nurses.

While most media reports focus on LBJ Hospital, reports also make it clear other hospitals, including Houston Methodist, are experiencing similar struggles. The Houston Chronicle says Harris Health System (which includes LBJ) is short some 250 nurses, while the University of Texas Medical Branch has requested an additional 100 nurses to help address staff shortages at four hospitals.

Baylor St. Luke’s Medical Center, a private Houston hospital jointly owned by Baylor College and a local healthcare system, said the hospital “is definitely being impacted” by the nurse shortage.

As for Houston Methodist, the hospital is reportedly struggling as well—although they’ve yet to admit it publicly.

“An internal memo at Houston Methodist Hospital said it ‘is struggling with staffing as the numbers of our COVID-19 patients rise,’” the Chronicle reports.

Public officials are scrambling to address the shortage, which has created a massive patient backlog throughout the Houston area. More than a week ago, Tex Gov. Greg Abbott requested out of state assistance for the statewide crisis, including 2,500 out of state nurses. LBJ Hospital officials said those nurses have not yet arrived.

The metro-wide shortage of nurses reportedly came to light when an ER doctor emailed a state senator about the dire situation in hospitals.

“The combined increase in volume from (COVID and) existing normal volume (and) nursing shortage has made this a terrible disaster at every ER and hospital in the city of Houston,” the physician wrote, according to the Chronicle.

It’s unclear to what extent Houston Methodist’s decision to fire 150 unvaccinated medical workers exacerbated the nursing crisis. For perhaps obvious reasons, hospital officials have been mum on the issue.

What we know is that Houston hospitals that did not abruptly fire 150 employees struggled to deal with the COVID spike, and in some cases people died as a result. So it’s safe to presume that Houston Methodist’s decision to fire 150 employees a few weeks before the Delta variant arrived in force didn’t make the situation any better and probably made it much worse.

Some may be tempted to think Houston Methodist was able to quickly replace the workers they lost, but evidence suggests this is unlikely. Apart from the broader shortage, front line nurses “are burned out,” they say.

“We are all tired of this; nurses are tired of this,” Texas Nurses Association CEO Cindy Zolnierek wrote in a recent public letter.

That Houston Methodist hospital didn’t intend to exacerbate its shortage of hospital staff goes without saying, but it’s also an important reminder about what economists call the Cobra Effect.

Every human decision brings about consequences, intended ones and unintended ones. Unintended consequences are so common economists often call them “Cobra Problems,” after an interesting historical event in India that occurred when the British Empire tried to eradicate cobras by putting out a bounty on them. (Can you guess what happened?)

When hospital administrators set their policy—get vaccinated or lose your job—their goal was to increase vaccination rates of hospital staff. The unintended consequence was a shortage of nurses and other hospital workers during a deadly pandemic.

In June, Houston Methodist’s president, Marc Boom, sounded confident that his coercive methods were effective, noting that almost 25,000 of the health system’s 26,000 workers were fully vaccinated.

“The science proves that the vaccines are not only safe but necessary if we are going to turn the corner against COVID-19,” Boom told employees in a statement.

Other Houston hospitals saw things differently. Two months before Houston Methodist fired its workers, Harris Health System officials announced they would not be requiring hospital workers to get vaccinated, noting none of the vaccines were fully approved by the FDA.

Americans will of course disagree about which CEO’s approach was the correct one. The pandemic, after all, has been bitterly divisive because we’re deeply divided over this very question: should coercive means be employed to achieve certain desired healthcare outcomes, and if so, to what extent?

In 2020, political leaders around the world said yes to this question, and the results were disastrous. A year later, private companies are playing a different version of the same game: take the vaccine, or get fired.

Like the lockdown champions of 2020, corporate leaders no doubt believe their action is moral, proper, and will achieve their desired result. But as the Cobra Effect reminds us, focusing strictly on desired outcomes and ignoring potential unintended outcomes is a good way to get bit.

The article is not quite accurate or out of date, active cases have fallen from 350,000 to 172,000 in Texas.
https://www.worldometers.info/coronavirus/usa/texas/#graph-deaths-daily
The Covid case surge ended a month ago, this looks increasingly just a nursing shortage. Florida has far more active cases 700,000, but far fewer deaths, average below 20 a day, against over 200 in Texas, they are not being overwhelmed because of Delta, this a failing health cares system.

Any why is it a “failing health cares system”? Partly because nurses and doctors are being driven off or fired for not going along with the shot. Which, by the way, is still experimental and unapproved by the FDA. The BioNTech shot was “approved” but is still NOT available for use in the US.

Cominarty will never be issued in US for then the liability costs will kill pfizer in the court system. lawyers just waiting around the kill for the chance…..pfizer will roll to Pfiser mectin and just let Cominarty die off…like many of the vaccine victims

Medical Chaos: Result Of Firing Unvaccinated Nurses In Houston | The Most Revolutionary Act

The plan has always been to destroy the economy. Let’s hope the multinationals that were tied into the scheme will go down with it.

These people push a mandate based on fake ‘science’ not the actual science, which confirms the mRNA jabs are NEITHER safe NOR effective by the standards of science: CV19 jabs are NOT vaccines as they do not prevent infection nor transmission; the jabs also lack clinical and animal testing of both short and long term effects. The number of USA deaths now stand at more than 14,000 in VAERS, plus hundreds of thousands of adverse reactions. Finally, ALL CV 19 jabs are are still operating under Emergency Use Authorizations and as such CANNOT be mandated without violating US laws or… Read more »

What about Abbott’s executive order banning discrimination over the fake vaccines versus scientifically proven better natural immunity or any other personal objection? Why import nurses. Hire back the ones unlawfully and unconstitutionally fired by these scumbag Democrat hospital CEOs.

Arrogance is a proggys downfall

The one and only reason why these large entities are firing their workers who refuse to comply with medical attacks is so that said entity can be eligible for the Biden payoffs, viz, ‘covid emergency money’. These entities must be found in compliance with the fiend’s underhanded and sinister demands to be eligible for massive amounts of coin which displays the entire farce was NEVER about people and the fake so-called ‘humanitarian’ thing. It was ALWAYS about the money, as seen recently seen with Southwest Airlines who did a false and ‘sudden’ back-flip once it was discovered the CEO and… Read more »

Figures, a christian based hospital making people get the devil shot. Gee, why aren’t these good christians following god instead of the devil?? I thought the old rino gov of Texas was not allowing such things in the lone star state.

Maybe at one time they were founded by Christians but for the most part these hospitals are ran by non Christians. This is has happened world wide, Christian institutions including churches have been taken over by atheist’s, Jesuit’s, and apostates. The Bible says the last days would be like this, “Let no man deceive you by any means: for that day shall not come, except there come a falling away (Greek: apostasy) first and the man of sin (anti-Christ) be revealed the son of perdition.” 2 Thessalonians 2:3.

“The science proves that the vaccines are not only safe but necessary if we are going to turn the corner against COVID-19,” Boom told employees in a statement.”

A BIG FAT LIE from a BIG FAT LIAR, BOOM. Besides the numbers here are not real. They are saying it’s about their loss of intelligent staffers but it’s really about the money they will get from the Feds. And the write talks about ‘morality’? There is NO MORALITY in these people or their actions.

In Quebec, as of 15 October 2021, we may no longer access HEALTH CARE facilities, including HOSPITALS, if we have not taken the POISON shots. I don’t mean health-care workers, I MEAN CITIZENS. Citizens who refuse POISON injections are denied HEALTH CARE that some of us paid taxes for all our lives. So much for the socialist medical system. Just robbery.

I’m betting groceries will be next. As in Germany: https://www.europereloaded.com/german-state-allows-grocery-stores-to-ban-people-without-vaccine-passport/?unapproved=93783&moderation-hash=e7cabadcc806178bb160b9cbd9fcbf74#comment-93783

Excuse me, I made a mistake. Quebec has not yet banned recipients of health care from hospitals and “care” facilities, only their VISITORS.
https://montrealgazette.com/news/local-news/covid-19-updates-montreal-quebec-new-cases-vaccine-mandate-mandatory-vaccination-vax-health-suspend-nurse-passport-dube-october-12

It's Almost Like They Want To Make A Prison Planet - ManufacturingReality.ORG