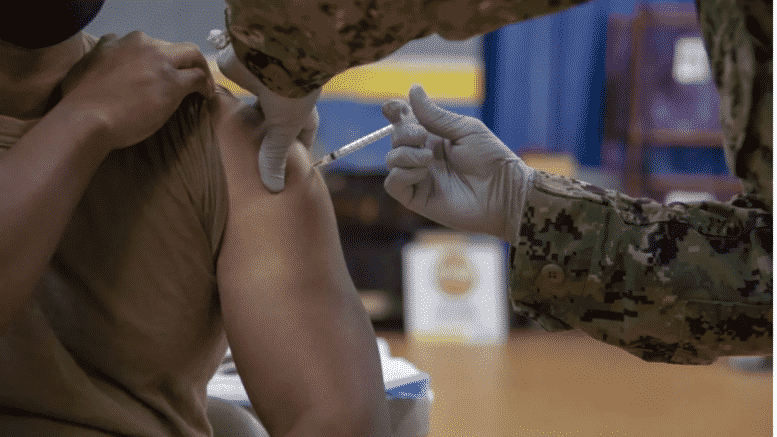 Please Share This Story!
PDF 📄
Navy personnel who refuse the jab, from swabbies to admirals, will be summarily booted with a General Discharge instead of an  Honorable Discharge, resulting in a loss of certain veterans’ benefits. Loss of personnel of this magnitude is a national security risk. ⁃ TN Editor

The U.S. Navy announced on Thursday it will begin halting reenlistments and transfer orders for sailors currently refusing the COVID-19 vaccines and active-duty sailors will have up until November 14 to either have an approved or pending vaccine exemption request or their second COVID-19 vaccine dose or they will face being discharged from the service. Sailors in the Navy Reserves have until December 14 to receive their second vaccine dose.

In a press release, the Navy said after those final vaccination dates pass, it will start processing discharges for sailors who have to that point refused vaccination and don’t have a pending or approved exemption.

The Navy said it set up a system specifically for handling sailors who refuse the vaccine, the COVID Consolidated Disposition Authority (CCDA). Adm. William Lescher, Vice Chief of Naval Operations said the CCDA will “ensure a fair and consistent process” for separation determinations.

The Navy said, effective as of the publication of its message, Navy commands will halt any reenlistment or execute orders, except for separations from the Navy, for any sailor who is refusing the vaccine, until the CCDA has handled their case.

The Navy said, “For officers and enlisted serving in Navy leadership roles refusing the vaccine, they will be notified immediately in writing that they have five days to either begin a vaccination series or request an exemption before being relieved and have detachment for cause initiated.”

The Navy said those sailors separated only for vaccine refusal will receive no lower than a general discharge under honorable conditions. Such a discharge status could result in the loss of some veterans’ benefits.

CCDAs will also have the authority to strip unvaccinated sailors of their warfare qualifications, additional qualification designations (AQD), Navy Enlisted Classifications (NEC), or sub-specialties, “except in cases where removal authority is otherwise authorized by law or Executive Order.” CCDA’s may also make sailors who refused the vaccine repay the Navy for applicable bonuses, special and incentive pays, and the costs for their training and education.

The press release also said the first flag officers in any Navy chain of command are authorized to temporarily reassign Navy service members who refuse the COVID-19 vaccine, regardless of whether they have a vaccine exemption.

Sailors who are already on terminal leave from the Navy or who begin their terminal leave by the “applicable deadlines are administratively exempted from vaccine requirements.”

The Navy’s announcement comes nearly two months after the FDA granted full approval to the Pfizer COVID-19 vaccine. President Joe Biden and Defense Secretary Lloyd Austin then moved to require COVID-19 vaccines for the entire military. Following their orders, the Department of the Navy announced at the end of August that active-duty sailors and Marines would have 90 days to receive the vaccination and reserve components would have 120 days, or else they could face disciplinary actions.

While the timeline the Navy set November 28 and December 28 as the dates active and reserve sailors must be fully vaccinated, the Navy said sailors aren’t considered fully vaccinated until they’ve completed 14-day waiting period following their second of two vaccine doses. That is why November 14 and December 14 are considered the last days for active and reserve sailors to receive their second vaccine doses.

The Navy said about 98 percent of active-duty have completed or started the two-dose COVID-19 vaccination series.

According to data reviewed by the Washington Post, vaccination rates increased rapidly in the wake of Biden’s mandate, but hundreds of thousands of service members across the various military branches are still unvaccinated.

this is some SICK $hit

No means of force or coercion there!
The future should not be gentle in the punishments of those that enforce these orders.

The Phizer shot is still under an Emergency Release Authorization. It is not “approved” for normal use and Phizer wants it that way so it cannot be sued for the damage it is doing. Please do not use the purposefully twisted information/wording of the Lefts’ propagandists.

some pretty evil sh¡t to dismantle our military like this.
how many marxist are really in there???

The First Service, the US NAVY, has made itself the last service in its globalist accomplice position to the murdering corporate technocracy and their Totalitarian goal of control through murder-for-profit model. They are, knowingly, killing the US military population.

It’s sickening to see the Navy, a service historically chosen by the men in my family, bending over for the Biden push. Good little compliant slaves all.

Can’t believe this happened to my Navy.
This will retire many short timers.
Globalist pencil pushing freaks ruined the military.