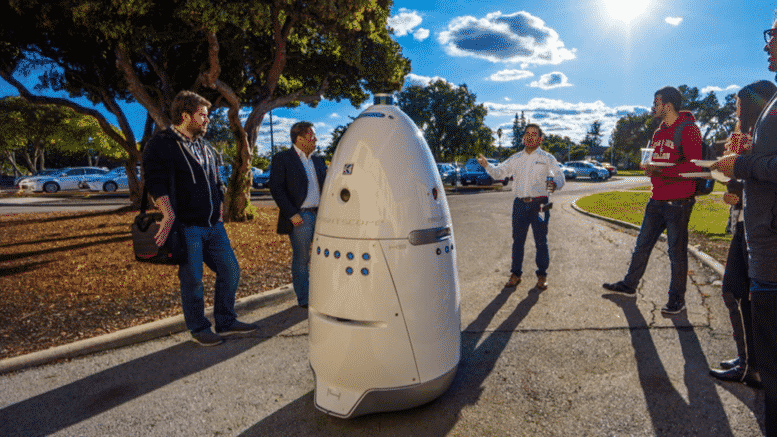 Please Share This Story!
PDF 📄
These security robots are deployed in 16 states, and cost between $6 and $12 an hour to operate. They include multiple cameras, facial recognition, license plate readers, microphones and the latest AI technology. Every citizen it encounters gets automatically profiled and stored. ⁃ TN Editor

The robotic protectors can see what you’re doing and even talk back to you, but the machines created by a New Yorker have prompted serious privacy concerns, CBS2’s Clark Fouraker reported Tuesday.

One of the models, named “Rosie,” uses the same technology as a self-driving car to patrol the sidewalks at the Lefrak City Apartments in Queens.

Li’s company has built three robot models in the United States, and is introducing them to customers inside a new showroom at 47th Street and Lexington Avenue in Manhattan.

Each robot has five cameras, four of which help the robot see things. The other is used to get thermal imaging data. All of the information gathered goes to an internet-based portal that helps local security forces on the ground.

The robots are able to observe people walking on the sidewalks, record license plate numbers, detect the heat in objects, and see which cellphone serial numbers are within a designated patrolling area.

Knightscope said the data is secured and is only seen by the security agency controlling the robot. They’re able to stop it and tell it what to look for, but it doesn’t have a joystick that would allow it to follow or target a specific person.