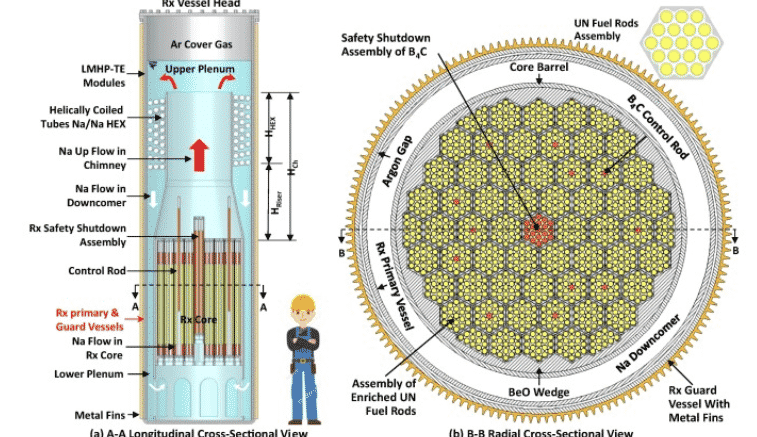 Please Share This Story!
PDF 📄
This revolutionary miniaturization of nuclear power could solve the world’s energy need in a few years, but it will most certainly be demonized by the Alternative Energy/Green New Deal who are pushing Sustainable Development. ⁃ TN Editor

A new Very-Small, Long-LIfe, and Modular (VSLLIM) reactor design has been developed at the University of New Mexico’s Institute for Space and Nuclear Power Studies. It offers passive operation and decay heat removal and redundant control to make it walk-away safe.

During nominal operation and after shutdown, the VSLLIM reactor is cooled by natural circulation of in-vessel liquid sodium (Na), that is enabled using in-vessel chimney (1–2 m tall) and helically coiled tubes Na-Na heat exchanger, placed at the top of the downcomer.

The reactor can generate 1.0–10 MWth, depending on the height of the chimney and the HEX design, at an average fission power density up to 23.47 MWth/m3. The VSLLIM reactor can potentially operate continuously, without refueling for ∼92 and 5.9 full power years (FPY), respectively, and slightly below atmospheric pressure, owing to the sodium low vapor pressure.

The core is loaded with hexagonal assemblies of fuel rods with UN enriched to 13.76%, and has independent systems for emergency shutdown and nominal control.

Highlights of the SLIMM Design

As many as 10–30 units could be deployed incrementally at a single site, commensurate with the increase in electricity demand, for a plant total electricity generation of up to 120 MWe.

These VSLLIM power plant modules could also be integrated into either a distributed or a central grid, with renewable energy sources, or operated alone. They can also provide both electricity and process heat for industrial uses and district heating.

It also has two independent systems for safe passive removal of decay heat after shutdown, and following an unlikely malfunction of in-vessel HEX. These are liquid metal heat pipes (LMHPs) embedded in the primary vessel wall, and natural circulation of ambient air along the outer surface of the guard vessel wall.

The LMHPs are thermally coupled to thermoelectric elements for generating 10 s of kW of auxiliary DC power, independent of on-site and off-site sources, both during nominal reactor operation and after shutdown. The sodium coolant enters the fast-neutron energy spectrum core at 610 K and exits at ≤755 K, depending on the reactor thermal power. At these temperatures, Na is compatible with the HT-9 Ferritic-Martensitic steel cladding, core structure and reactor vessel.

Of course the by product will also be of no concern right? Depleted plutonium makes a great lead substitute in weaponry right with no environmenetal consequecnes right? You know as is the case in Iraq.

How do I buy one of these?

This is a no go. As others mentioned, it does nothing to solve the waste problem. Also, to terrorists it’s a pre-positioned dirty bomb kit; just add high explosives.

…it will most certainly be demonized