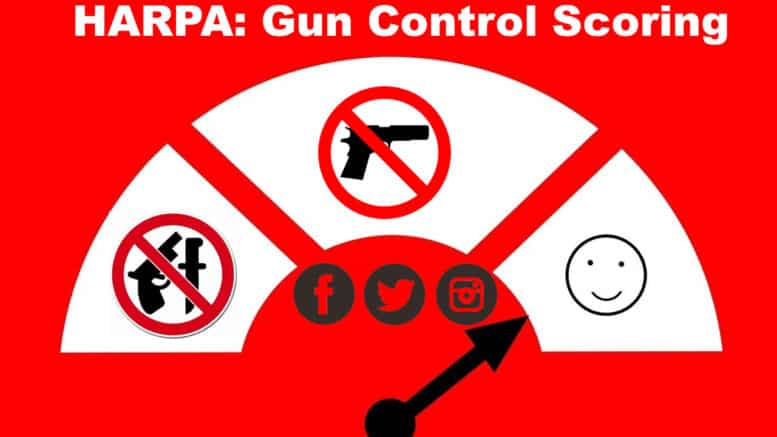 Please Share This Story!
PDF 📄
The Trump Administration has broken the ice on using Social Credit Scoring technology to decide who is mentally stable enough to purchase a weapon. Like a ‘No-Fly’ list, a ‘No-Buy’ list would be based on AI analysis of social media posts. ⁃ TN Editor

The Trump administration is considering a proposal that would use Google, Amazon and Apple to collect data on users who exhibit characteristics of mental illness that could lead to violent behavior, The Washington Post reported Thursday.

The proposal is part of an initiative to create a Health Advanced Research Projects Agency (HARPA), which would be located inside the Health and Human Services Department, the report notes, citing sources inside the administration. The new agency would have a separate budget and the president would be responsible for appointing its director.

HARPA would take after Defense Advanced Research Projects Agency, or DARPA, which serves as the research arm for the Pentagon. The idea was first crafted in 2017 but has since gotten a renewed push after mass shootings killed 31 people in El Paso, Texas, and Dayton, Ohio, in August.

President Donald Trump has a close relationship with Bob Wright, who founded the foundation after his wife died of cancer. Wright was a former chair of NBC and occupied that position while the president hosted “The Apprentice.”

HARPA would develop “breakthrough technologies with high specificity and sensitivity for early diagnosis of neuropsychiatric violence,” according to a copy of the proposal. “A multi-modality solution, along with real-time data analytics, is needed to achieve such an accurate diagnosis.”

The document lists several technologies that could be employed to help collect information, including Apple Watches, Amazon Echo and Google Home. Geoffrey Ling, the lead scientific adviser on HARPA, told reporters Thursday the plan would require enormous amounts of data and “scientific rigor.”

He added: “Everybody would be a volunteer. We’re not inventing new science here. We’re analyzing it so we can develop new approaches.” The White House declined to provide the Daily Caller News Foundation with a statement but sources told WaPo that Trump has reacted “very positively” to the proposal — it is unclear if he has seen the Safe Home idea.

The government ignores the obvious: psychotropic drugs with harmful side-effects.

The next step will be to tie the score cerated into the weapon and depending on the score the weapon may be made inoperable on demand.

And I thought he was our friend. Funny how the Republicans seem to be the ones to take away the most, and could it be that the Republican’s are the ones who instigate the signing of the peace treaty between Israel and the devil? Isaiah 28:15-18. Remember Bush? and there were many? All on false flags. The Dems are quite evil and have already erased God out of their party & platform, but the Repubs are suppose to be the “Christians”.

I fully AGREE nng. I’ve seen it all my adult life… – and I’m a “senior” senior citizen now. They are ALL lyin bast*rds. I’ll offer this pair of quotes to illustrate my point: ” The whole aim of practical politics is to keep the populace alarmed (hence clamorous to be led to safety) by menacing it with a series of hobgoblins.” ~ H.L. Mencken —————— “The great masses of the people more easily fall victim to the big lie than to a little one, since they themselves lie in little things, but would be ashamed of lies that were… Read more »

Don’t know if your a Christian or not, but this all leads to the one world religion. And if you sought out who the President’s ‘Spiritual’ advisor you would be quite alarmed! Here is a great example: “Then an herald cried aloud, To you it is commanded, O people, nations, and languages, That at what time ye hear the sound of the corner, flute, harp, sackbut, psaltery, dulcimer, and all kinds of music, ye fall down and worship the golden image that Nebuchadnezzar the king hath set up: And whoso falleth not down and worshippeth shall the same hour be… Read more »

Social Credit Scoring Technology based on what? This could get political way too easily. Do we want Leftists determining who can and can’t have a gun?

The most ‘troubling’ thing of all about any of this it will be CONTROLLED by an entity that anyone with 1/2 a brain has already seen it cannot be “trusted” with a thing ; the U.S. Government. I mean in light of all we’ve all seen from its ‘representatives’ -am I wrong?

If early study of a child’s behavior and in some cases a psychological evaluation on those who has a history of violence and mental outbreaks this would catch and or stop this all. The attacks are mostly young adults or even teens that are doing these mass shootings. So hence forward the earlier statement applies.