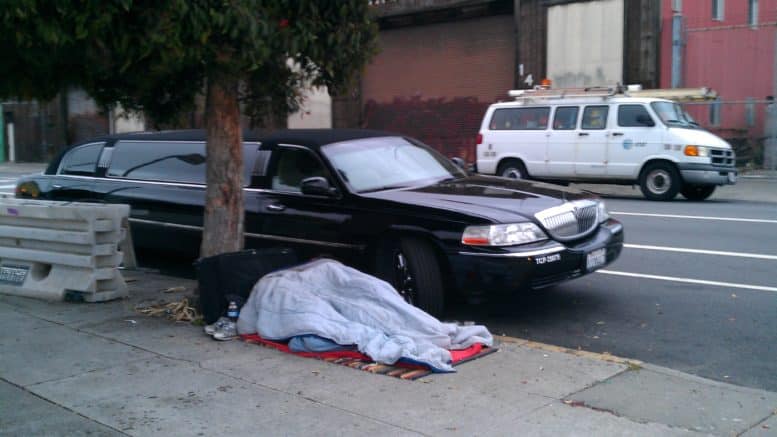 Please Share This Story!
PDF 📄
Most techies who live there will never sing “I Left My Heart in San Francisco” because of the ugly side-effects of the tech transformation. The city of culture is now called depressing and boring. ⁃ TN Editor

It was a beautiful winter day in San Francisco, and Zoe was grooving to the soundtrack of the roller-skating musical Xanadu as she rode an e-scooter to work. The 29-year-old tech worker had just passed the Uber building when, without warning, a homeless man jumped into the bike lane with his dog, blocking her path.

She slammed on the brakes, flew four feet into the air and landed on the pavement, bleeding. “It was one of those hardening moments where I was like, ‘Even I am being affected,’” she recalled.

It should be noted that Zoe, who asked not to be identified by her real name because she was not authorized by her employer to speak to the press, is not the stereotypical tech bro who moves to San Francisco for a job and immediately starts complaining about the city’s dire homelessness crisis. She arrived in 2007 to study at San Francisco State University and had a career in the arts before attending a coding bootcamp and landing a job at a major tech company.

But the fall and other incidents, including getting mugged and having her phone stolen, have all contributed to her growing sense of insecurity in the area. She told the Guardian the tale of her scoot, interrupted, because she said it was a perfect example of her own – and perhaps the broader community of tech workers’ – increasingly hate-hate relationship with San Francisco. “This guy needed services to help him,” she said of the man who caused her to fall, “and we all suffer because of the issues that are not being addressed.”

A quarter of a century after the first dot-com boom, the battle for San Francisco’s soul is over and the tech industry has won. But what happens when the victors realize they don’t particularly like the spoils?

Tech workers are increasingly vocal about their discontent with the city they fought so hard to conquer. In May, the median market rent for a one-bedroom apartment reached an all-time high of $3,700 a month, according to the rental site Zumper. Meanwhile, the city saw a 17% increase in its homeless population between 2017 and 2019, and residents complain of visible drug usage, fear of crime and dirty streets. Even Marc Benioff, CEO of Salesforce and a San Francisco native who has long urged comity between the techies and the city, has taken to calling his hometown a “train wreck”.

For Zoe, the newfound financial security from working in tech does not counterbalance a constant sense of being unsafe in the city. She now earns three to four times more than when she was a “starving artist”, but she says she is terrified to walk at night. She no longer rides scooters and says she feels “triggered” when she sees them around the city. She takes Ubers everywhere after dark and asks drivers to watch to make sure she gets inside her apartment building.

“Mark Zuckerberg lives nearby, but our corner is the main prostitution corner in the city,” she said of the Mission District apartment she shares with her boyfriend. “There’s condoms and syringes. It’s absolutely crazy with how much we pay for rent … It’s tough, because we work in tech, but we ask ourselves every day if we should move.”

It’s a striking contrast from just five years ago, when tech workers showed up in force at San Francisco City Hall to declare their love and respect for a city that was not exactly loving them back. “I am so proud to live in San Francisco and be a part of this community,” Google employees were instructed to say, as a preface to their remarks at a January 2014 hearing before the local transportation authority, according to a leaked company memo.

That hearing was one of several pivotal moments in recent San Francisco history when public officials could have used the city’s legislative or regulatory powers to force the tech industry to contribute more to public services, but chose not to. Such inflection points (which also include a controversial 2011 tax break for Twitter and a failed attempt at a “tech tax” in 2016) highlight the complicated relationship between the city government and an industry that has brought untold wealth and jobs, but has arguably failed to pay its fair share – while treating the city as a petri dish for disruptive innovations (think Uber, Airbnb and self-driving cars) by ignoring regulations.

The nominal issue in 2014 was the use of public bus stops by private charter shuttles (AKA “Google buses”) hired by tech companies to ferry employees the 45 miles south to their Silicon Valley headquarters. Activists wanted the double-decker buses banned from the streets and the companies fined for the illegal use of bus stops; the city chose to legalize the buses.

San Francisco was a primarily Irish and Italian Catholic city prior to the homosexual invasion in the mid-’70’s. The gay mafia demanded at respect, then submission, then acceptance of their pubic perversion parades. This was followed by the bath house gay death disease epidemic of AIDES and then the druggies showed up with the homeless. This was the plan of the Left. This is the authoritarian Left, like the current gaggle at Gulag, Fakebook and Twaddle. Please don’t leave, Techies! You voted for this mess of feces and perversion and now we don’t want you to wreck any other parts… Read more »

Neither Left or Right myself. But I have to agree with one point–DO stay in San Francisco Techies. Please. Can’t bear to listen to your mindless, Techie Twaddle (as Dan calls it) framed-up as political intelligence by your uber-rich overlords for their own purposes but gulped down by you as if it were communion wine.