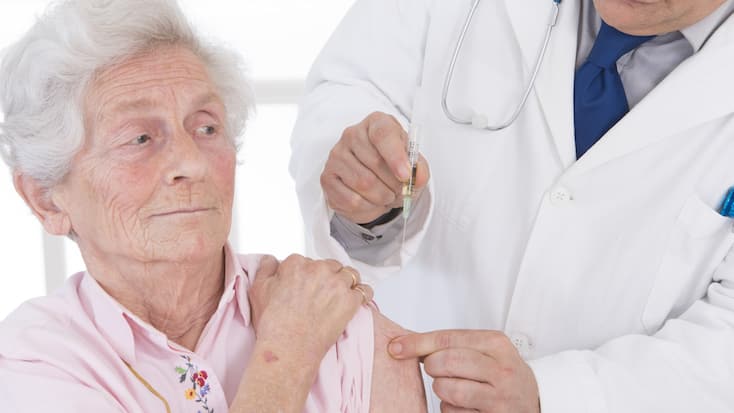 Please Share This Story!
PDF 📄
Another scientist from Imperial College London is suggesting that children must be vaccinated for COVID-19 in order to protect the elderly. No problem that children are absolutely the lowest subgroup of society affected by COVID. No matter that COVID mutates faster than a herd of cats scatters. ⁃ TN Editor

A vaccine against Covid-19 may not work well in older people who are most at risk of becoming seriously ill and dying from the disease, say scientists, which may mean immunising others around them, such as children.

Prof Peter Openshaw, from Imperial, one of the members of the UK’s Sage scientific advisory sub-group Nervtag, told the House of Lords science and technology committee it was this week considering a paper on targeting different groups in the population with vaccines.

“Sometimes it is possible to protect a vulnerable group by targeting another group and this, for example, is being done with influenza,” he said. “In the past few years, the UK has been at the forefront of rolling out the live attenuated vaccine for children.”

Giving the nasal spray flu vaccine to children who do not often get severe flu protects their grandparents, he said. Immunising health and care workers – who are likely to be the first to get the vaccine – would also help protect older people who have the most contact with them.

rne Akbar, professor of immunology at UCL and president of the British Society of Immunology, said scientists needed to work out what goes wrong with the immune system as people get older.

“One thing that’s apparent, even in healthy older people, is that there’s more inflammation all around the body. We need to understand where that inflammation is coming from,” he said. “And this baseline inflammation in older people is linked to frailty and many negative outcomes as we get older. And this seems to be exacerbated when you get a severe infection like Covid-19.

“But what is the source of the inflammation in the first place? That’s something that we really need to get to grips with.”

Akbar said something else might be needed alongside the vaccine for older people, such as the steroid drug dexamethasone, which can block the inflammation caused by the virus and has been shown to save lives in Covid-19.

The committee took evidence as Oxford University announced successful trials of two doses of its candidate vaccine in pigs, which respond in a similar way to humans. The Pirbright Institute, working with the vaccine scientists, established that two doses resulted in a significantly increased antibody response over one dose.

“It is not yet known what level of immune response will be required to protect humans against Sars-CoV-2. Vaccine efficacy trials are under way in humans, and if the efficacy result is lower than hoped for after a single dose, it is important to know if giving two doses could result in a greater immune response, which could then be more protective,” said a statement.

Working towards keeping a healthy immune system is working out fine for me. Many others can attest to this fact. There are times when antibiotics can be useful for fighting off infections. I get it that certain drugs may be necessary for controlling issues like diabetes and hypertension. It is possible to improve and maintain our health through proper nutrition. Some people know this. Vitamins, minerals, amino acids and essential fatty acids do a splendid job with my health by themselves. Drugs contain no nutritional value to my knowledge, and may very well contribute to nutritional deficiencies and additional health… Read more »

Any reason at all to vaccinate the populace! No more vaccines! Not for me, my children or my grands!

“may not work for at risk older people……” I’m an older person and choose not to vaccinate. This is just one more means to poisoning unsuspecting people.

I’m in my late 60’s. Not getting any of the vaccines. Too dangerous. The spike protein they THOUGHT would stay in the shoulder muscle? It doesn’t. They’ve found it in saliva and sweat. I’m not convinced people can’t pass it on to others.

I’m sorry to have to say that the At-Risk Older People are enormously at risk, suffering from the side effects of the COVID-19 vaccine. Speaking as a Dutchy, I’ve noticed that Britain is an enormously brainwashed nation. Many gullible people, old and young. It’s noticeable in the press, television, pamphlets and slogans chosen during the present pandemic. There’s similarity between the Brexit propaganda and the COVID-19 fear-propaganda. In The Netherlands there’s no slogan saying “Save lives”. We’re asked to be responsible and take care of each other, be respectful, and patient. A more positive and constructive approach in addressing the… Read more »

The vaccine doesn’t prevent transmission, unfortunately – nor does it prevent infection

Is that article for real…. lets give vulnerable older people a double dose or make it sound better by adding steroids, what could go wrong!…;;. just to make sure they die off early, WHO in their right mind would EVER have a vaccine now that that production line has been taken over by eugenics…

Older people in nursing homes are 10 times more at risk of dying than those at home. They are also more likely to get the flu shot as they are mandatory for residents The flu shot approved only for elderly and mostly given to elderly in nursing homes is Fluad. It has a super adjuvant (squalene based) to overcome the elderly poor immune response. In some patients one might expect this may be a cause of the excessive inflammation from covid. While young people get infected with COVID virus, studies have shown most don’t transmit it because symptoms are mild… Read more »

They are giving that jab far too high in that image. She’s going to have a serious shoulder problem if that was carried through.