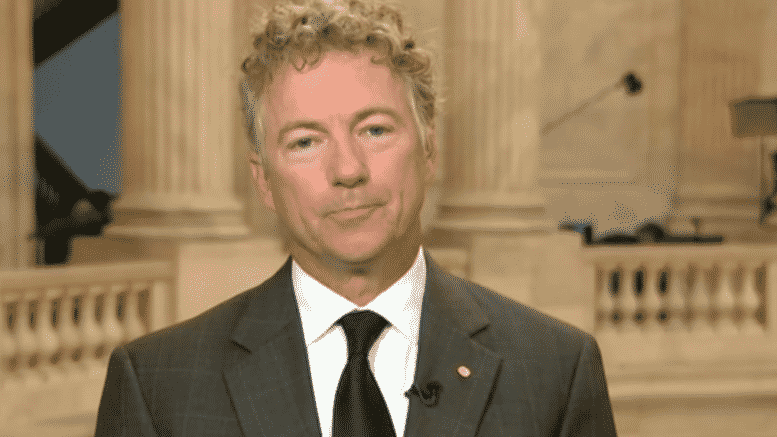 Please Share This Story!
PDF 📄
Sen. Rand Paul is fearless in calling out the government that he is still part of: The Department of Justice has just criminalized legitimate dissent. The move is patently illegal but the damage is done, emboldening school boards to report dissenters they don’t like to local and federal agencies for harassment and punishment.

Destructive and murderous behavior of groups like BLM and Antifa are not designated as domestic terrorists or threats to national security, but moms and dads of young students are because they protest rogue school board behavior. This will test the backbone and mettle of every middle American who never thought they would be personally affected by the turmoil in America. Now, they have been dragged into it, even if kicking and screaming. ⁃ TN Editor

In the wake of Attorney General Merrick Garland’s announcement that he plans to sic the FBI on concerned parents who speak out at school board meetings against critical race theory and COVID restrictions, Senator Rand Paul (R-Ky.) blasted the Biden administration and said Americans should “be afraid of your government.”

“Moms at school boards are being told that they’re criminals, potential domestic terrorists, for the crime of dissent, and I think criminalizing dissent is something that we should all be appalled with,” Paul told Fox News.

Garland claimed that there has been a “disturbing trend” of teachers being threatened or harassed. PJ Media’s Megan Fox looked into these allegations and concluded they’re mostly bunk.

When asked what he would tell Americans concerned that they’ll end up on some government list if they “say the wrong thing” at their local school board meeting, Paul didn’t mince words.

“I would say be afraid. Be afraid of your government,” he responded. “That’s a sad thing from someone in the government to say, but the thing is, is those lists already exist.”

“I think the problem is, it’s become so normalized to use government to search out and seek out your opponents,” Paul continued, before citing the abuse of FISA warrants to illegally spy on the Trump campaign as an example.

“If you go to a school board meeting and you’re disruptive and you don’t obey the rules of the school board meeting, then there will be local punishment,” Paul said. “But that has nothing to do with the federal law, it has nothing to do with the Department of Justice. What Merrick Garland did is, he’s attempting to stifle dissent, and he’s attempting to say, ‘Beware, or Big Brother’s coming after you if you speak out against my policies or against the Biden policies.’”

Tyrone, you are busted as a troll/propagandist, arguing a point that has nothing to do with the story at hand, and discrediting Rand Paul at the same time. senator Paul has always promoted the right to choose and opposes all mandates. He is not taking the vaccine but not because he is anti-vaccine in general. NBC News reported,”I just made my own personal decision that I’m not getting vaccinated, because I’ve already had the disease, and I have natural immunity,” Paul said. I am happy to leave your comment up so others can see through your tactics and learn some… Read more »

Well, at least you’ve shown personal integrity here regarding your stand for freedom of speech, Patrick. I could not say that about other alt-sites. It appears that if you don’t think Rand Paul is an untouchable saint you are deleted without explanation which makes those sites no better, in practice, than the FakeSM. Practice is the bottom line in respect of freedom.

If one states they believe in and support freedom of speech then one must grant it to others, even in opposition. Good for you.

I have a question. Has Senator Paul spoken out about the extraordinary number of deaths and adverse reactions which have occurred shortly after receiving the experimental gene therapy injections from Pfizer, Moderna or J&J? It is fine to insist on individual freedom of choice about whether to receive medical treatments or not but I would hope to hear more from a Senator or other political leader than mere defense of freedom of choice. People are having their health ruined and in some cases losing their lives because of these coerced novel gene therapies. A true leader would be warning people… Read more »

Mr. Wood, you are well read enough to know the adversary plays both sides of the fence. A bird has two wings, a left and a right, serving the same bird. “All the world’s a stage. . . “

Of course, and I have said so many times, but what is your point? This article is about the DOJ being weaponized against normal, middle class citizens.

The entire government apparatus has been weaponized against its citizens for far longer than Rand Paul’s statement. Consider this quote by Lysander Spooner concerning events surrounding the civil war and thereafter: “The Constitution has either authorized such a government as we have had, or has been powerless to prevent it. In either case, it is unfit to exist.” -Lysander Spooner It is impossible to find all the smoking guns needed to prove to the braindead among us who the adversary is, the adversary’s strategy, and the adversary’s ultimate goal because they are incurably wounded and have zero discernment. How many… Read more »

“Today’s LEFT?” “We should all be appalled?” “Be afraid?” WHAT? NO! All these statements fall well below the central fact–Americans live under a Constitution of freedom. Apparently, that wasn’t important enough for either Paul or Fox to mention. For the record, I’m not entranced by Rand Paul, like some. I reserve judgment, presently. He’s done some good things but he also backed away from Fauci in a critical moment. I watch deeds. The Biden Administration, his homies and all their cartel buddies occupying seats of inscrutable power currently are ordinary criminals, NOT Democrats, NOT the LEFT. You must get this… Read more »

I too am not greatly impressed by Rand Paul. He is too tame and conciliatory. Shame on him telling people to be afraid of the government because they might put their names on a list. When these obvious enemies of the American people trample on the Bill of Rights, demonize us, accuse us of doing what they in fact are doing to us, threaten us and impose dangerous experimental gene therapies on us, including our children, then the appropriate response is cold, determined, disciplined, defiant, righteous outrage, NOT cowering in fear because these commissar wannabes call us names. We can’t… Read more »

They do have lists for sure. Anyone who is registered republican, libertarian, constitutionalist, the military, Christians, and probably you know who Hitler tried to wipe out. So here we are and what can anyone do about it. America is the strongest military in the world and intel, and those people who made the lists have control of them. This is quite serious and by next year if there is another year for America you won’t recognize it unless God’s mercy intervenes. We have an enemy Satan, and a Savior Jesus Christ and we are in the last days and not… Read more »

“…what can anyone do about it. (sic)” You can stand up when called upon with everyone else who opposes this Totalitarian regime’s take-over our our country, no matter their affiliation to an organization outside your own of which you may not approve. As the collectivist mantra so sickly put out in early 2020 for the purpose of entraining the world to the predator propaganda blitz and their actions: WE ARE ALL IN THIS TOGETHER. Let’s help them understand EXACTLY WHAT that means to free humans. We will not back down. We will not let them have the generations that follow.… Read more »

Sorry I trust Jesus who says to have NO FEAR not Senator Paul! Our struggle is against the ruler of this world. Biden’s regime is getting VERY desperate now that some 40% of their allocation has adamantly refused to ever take the “vaccines” this leaves a large control group against which to weigh the global bioterrorism campaign. Their master will be very disappointed if more states followed what’s happening in Florida school districts where the feds are LOSING en masse. So they need to use the alphabet soup IRS DOJ FBI FISA etc to track those $600 stimulus payments they’re… Read more »

As the Psalmist said, “the Lord is my helper. I shall not fear what man shall do unto me.” In the new testament Christ said to fear Him who is able to destroy both body and soul in hell. I do get Rand Paul’s comments about the government though. The leadership simply can’t be trusted. And this state existed long before covid19. We see tyranny and government over-reach in both the old and new testaments. My point being that people who chose (choose) to continue serving God regardless of who does or doesn’t do what. That’s the way it’s gotta… Read more »

Well, I have to say that I’m pleasantly surprised at the responses herein. I figured I’d be put on a rail and run out of town for not worshiping Rand Paul’s words. It gives me high hope to read that ordinary Americans are actually awake enough to see and understand the truth of what is always happening in politics–playing both sides to gain influence. That influence can be weaponized for themselves or for those they were sworn to protect. Let’s hope that Paul is gaining influence for the purpose of saving the Republic and not for his own survival when… Read more »