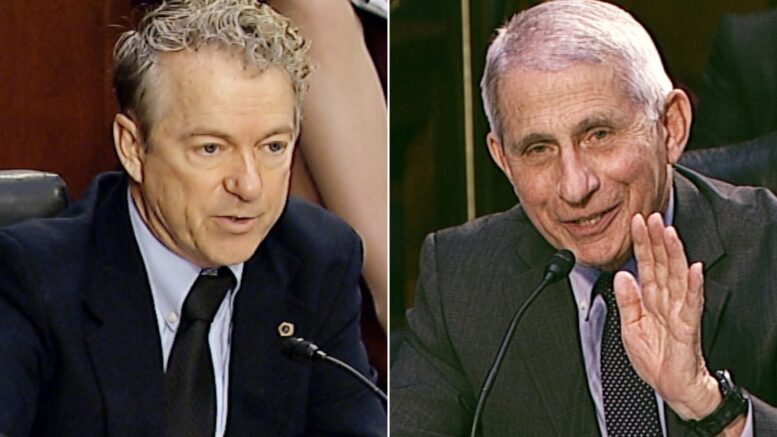 Please Share This Story!
PDF 📄
If Anthony Fauci had been unfortunate enough to be born in early 20th century Germany and did the things during WWII that he has done during his present career, he would likely have ended up at the Nuremberg Trials pleading for his life. Millions of lives have been negatively affected, including death, not to mention ripping the social fabric of America to shreds with unproven, unscientific policies like business and school lockdowns, face masks, etc. ⁃ TN Editor

Senator Rand Paul asserted Thursday that Anthony Fauci is directly responsible for funding dangerous research that likely killed millions of people, and that he “won’t get away.”

“Likely there is no public health figure who has made a greater error in judgement than Dr Fauci,” Paul declared in a Fox News appearance, adding “the error of judgement was to fund gain of function research in a totalitarian country.”

Fauci funded “research that allowed them to create super viruses, that in all likelihood leaked into the public and caused seven million people to die,” Paul declared.

“This is right up there with decisions, some of them malevolent or military to kill millions of people,” The Senator further urged.

The Senator made the comments after Fauci appeared in a fawning Washington Post interview, where he was labeled a “hero,” complained about being a victim, and couldn’t think of anything he did wrong.

Paul further noted that “It goes to judgement, talk about errors, you think he might apologise to the world… to support that kind of research then look the other way and say nothing to see here, and to cover it up.”

“For the last two years he’s been covering his tracks, but we’ve caught him red handed and he won’t get away,” Paul asserted, adding “historically [Fauci] will be remembered for one of the worst judgments in the history of modern medicine.”

Paul also commented on efforts he is leading to overturn the Biden Administration’s COVID vaccine mandate for military personnel.

“They deserve to have their religious freedom, as well as their medical choices and freedom to decide what goes into their body,” Paul noted.

“The military has become so ‘woke’ and they’re demanding you get a vaccine that you don’t need, so something’s got to change,” the Senator further urged.

I feel that while it is revealed that Anthony Fauci was part of this program working with the CCP on gain of function research essentially bioweapon research if we are being honest, but the reality is that this facility had been there for some time just as other facilities like it, this is not new. We must recognize that this goes way back and stop pretending that it just began sometime when Ralph Baric came onto the scene to research coronaviruses, the fact is that this was a method chosen long ago for the purpose of determining if these methods… Read more »

If Fauci had been part of the Nazi regime, he might well have come to America in ‘Operation Paperclip’. Paul goes after Fauci because that’s safe. Does he go after the pharmaceuticals and talk about the millions of people already injured or killed by the Trump bioweapon? No! No politician will go after big pharma. The trump bioweapon has to be outlawed NOW! He once told Fauci that Fauci was making people vaccine resistant. This guy/DC: worthless. Do they call out the CBDC? Do anything to stop the war in Ukraine. They are corrupted and owned.