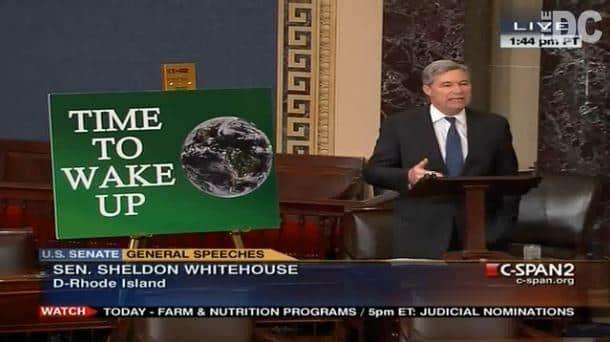 Whitehouse and 19 other Senators who are supporting this tirade against ‘deniers’, are the ‘useful idiots’ of Technocrats who planted all this bad science in the first place. It’s perfectly ironic that Whitehouse charges fossil fuel companies with a “misinformation campaign to mislead the public and cast doubt in order to protect their financial interest.” ⁃ Technocracy News Editor

On July 11, 19 Democratic senators, led by Senator Sheldon Whitehouse (D-RI), took to the floor to attack fossil fuel companies for engaging in a “web of denial” about climate change.  Senator Whitehouse and his like-minded colleagues are using climate change as a Trojan Horse to hide their environmental agenda and their hostility to the economic benefits derived from using fossil fuels.

Senator Whitehouse’s resolution claims that fossil fuel companies have engaged in a “misinformation campaign to mislead the public and cast doubt in order to protect their financial interest.”  It also claims that think tanks, public relations firms and other organizations have been funded to give legitimacy to this campaign and are part of this web of denial. These senators base their allegation on a sound bite—“the science is settled”—that is derived from the radical tactics of activists like Saul Alinsky.  Sound bites are not evidence.

The International Panel on Climate Change (IPCC), which climate activists cite as the gold standard on climate science, does not claim that the science is settled.  In its most recent Assessment Report, it identifies a number of important climate factors and processes for which the state of knowledge is limited.  It ranks the level of confidence about 11 factors contributing to warming from very high to low.  Of the 11, only 2 are ranked “very high” and only 3 are ranked “high.”  This only represents 45 percent.  That is hardly sufficient for claiming settled science.

Back in 2001, the National Academy of Sciences addressed a number of questions about climate change.  In its report, it stated unambiguously “Because there is considerable uncertainty in current understanding of how the climate system varies naturally and reacts to emissions of greenhouse gases and aerosols, current estimates of the magnitude of future warming should be regarded as tentative and subject to future adjustments (either upward or downward)”. While our state of knowledge has advanced since then, it has not eliminated uncertainty as evidenced by the fact that advocates cannot adequately explain the pause in warming since 1998.

The list of reasons why the science is not settled, and likely never will be, could go on, but these few examples are sufficient to make the case that Senator Whitehouse and his 18 other colleagues are not interested in facts and honest debate.  Their goal is to silence critics of the climate orthodoxy, which provides the ultimate rationale for environmental overreaction and the precautionary principle.  As one observer commented years ago, freeze or fry, wet or dry, the problem is always the same, fossil fuels and the solution is more regulation.

These senators with the support of the environmental lobby represent a clear and present danger not just to the first amendment but also to our system of government.  Environmental elites have for some time championed greater control by central governments.  At the 2000 climate change Conference of the Parties (COP), former French president Jacques Chirac called for global government—“For the first time, humanity is intuiting a genuine instrument of global governance…which France and the European Union would like to see established.”

More recently, the former head of the UN Framework Convention on Climate Change, Christiana Figueres stated, “Democracy is a poor political system for fighting global warming. Communist China is the best model”.  And lest anyone think that she simply misspoke, she also said, “The Industrial Revolution was also a transformation, but it wasn’t a guided transformation from a centralized policy perspective.  This is a centralized transformation that is taking place because governments have decided that they need to listen to science.  So it’s a very, very different transformation and one that is going to make the life of everyone on the planet very different”.

A world government modeled on the UN or EU is a scary thought.  Senator Whitehouse and his colleagues took an oath to “support and defend” the Constitution.  But history has demonstrated that silencing criticism and debate are the first steps in limiting freedom and liberty.

If the Good Senator and indeed the oil Companies spent 5 minute researching UNFCCC-IPCC and Earth environment science they would discover the USA could have eliminated its global debt by replicating Nature. CO2e CH4 etc.be it from Volcanoes /anthropogenic deserts the emissions sit in the upper atmosphere. Here is where the oil companies, Congress and Senate USA missed the multi-billion $$ T O. Well planned they could have lowered the CO2e back via the dedicated vegetation into the USA man made deserts. The manure from the roots grows soil soil-carbon. The new soil USA could have grown food rather than… Read more »

Robert, you are a true Technocrat at heart. When you state “I respectfully suggest USA Government should seek dedicated science advice to run the nation not emotive Congress members Senators expressing their ‘thought'”, you are parroting the official definition of Technocracy from their 1938 magazine of the same name: “Technocracy is the science of social engineering, the scientific operation of the entire social mechanism to produce and distribute goods and services to the entire population…”