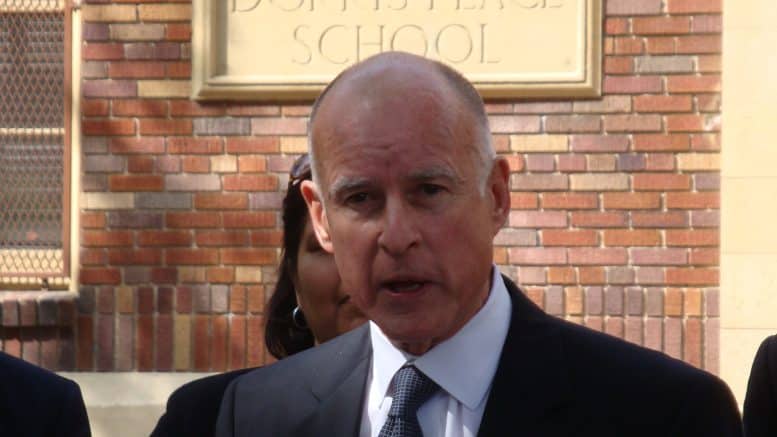 The great rebellion against Trump’s Administration is underway, with governors and mayors pandering their support for climate change to the United Nations. ⁃ TN Editor

Jerry Brown, the governor of California, huddled on Sunday night with European, Brazilian and small-island leaders — gathered here for the 72nd session of the United Nations General Assembly, which formally begins on Tuesday — and pledged to work with them on climate change. On Monday he met with António Guterres, the United Nations secretary general, to discuss the future of the Paris agreement.

In another era, meetings like these might have been the exclusive domain of the State Department. But with the Trump administration vowing to leave the Paris agreement on climate change — affirmed on Monday by Gary D. Cohn, the chief White House economic adviser, at a meeting with allied ministers — Democratic state governors are taking an increasingly conspicuous role on the international stage, forming something of an informal negotiating team.

It is the first time that governors have taken such a prominent role on climate change at the annual General Assembly. Analysts said it would be the first real test of whether governors can persuade world leaders that efforts by American states might be able to take the place, at least in part, of federal government action.

The goal, the governors say, is to assure other countries that they, along with and hundreds of cities and businesses, remain committed to cutting greenhouse gas emissions and meeting the goals of the Paris accord.

“You have allies in the United States. You shouldn’t put your foot on the brake or even tap it just because we have a climate denier in the White House. You’re not alone,” Gov. Jay Inslee of Washington said he would tell world leaders this week.

He rejected the idea that the governors represent a shadow diplomatic corps. “I don’t think it’s a shadow,” he said. “We’re in the sunlight. We’re shining the bright light of success.”

Jerry Brown is a fraud and an front man for the Elite. So, Jerry Brown let us talk about the massive onslaught of Geoengineering, global weather control, bio terrorism, world climate manipulation. These political traitors to the to the American people, deceptive Luciferian men are lairs and full of deceit!
People are being deceived and manipulated and the amount of cognitive dissonance is amazing! Surveillance and technology are fast approaching and mostly here will sweep away the unsuspected people who live in the “never happen” mind set. Cognitive dissonance isn’t a disease it’s a choice!

Climate Change and or Global warming is a man made problem, if the governments of the WORLD want to stop this problem, STOP spraying the world with dangerous/poisonous, gases/chemicals applied by military and commercial aircraft, used in their geo-engineering programs. Fake clouds are trapping the heat of the earth from escaping into the upper atmosphere, like it has since the beginning of time, while these chemicals are killing everything under the sun including you and me. But sure, tax us in the meantime for your stupidity? WTF?