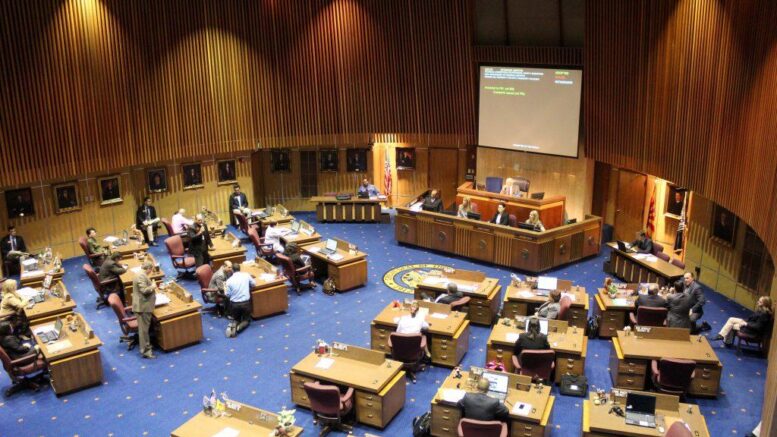 Please Share This Story!
PDF 📄
State legislators are rising up against dictatorial governors to limit or remove their ability to declare emergencies to impose draconian mandates that cause damage to state citizens and economies. States, counties and cities have immense, untapped power to push back against Technocrat tyranny. ⁃ TN Editor

Irritated by the sweeping use of executive orders during the COVID-19 crisis, state lawmakers around the U.S. are moving to curb the authority of governors and top health officials to impose emergency restrictions such as mask rules and business shutdowns.

The push is underway in such states as Arizona, Michigan, Ohio, Maryland, Kentucky, Indiana and Pennsylvania, where legislators are seeking a constitutional amendment to strip the governor of many of his emergency powers.

Pennsylvania Republican Sen. Wayne Langerholc said the amendment would “make it unequivocally clear that our General Assembly is a co-equal branch … that we are not a monarchy and that our voices matter.”

Democratic Gov. Tom Wolf and some of his counterparts around the country have argued that they need authority to act quickly and decisively against the fast-changing threat.

The coronavirus has killed an estimated 430,000 Americans and is going through its most lethal phase yet, despite the rollout of vaccines, with new and more contagious variants from abroad turning up in the U.S.

State legislatures generally took on lesser roles after the pandemic hit, with many suspending work or adjourning. It has been governors or their top health officials who have set many of the policies — imposing mask mandates, limiting public gatherings and shutting down dine-in restaurants, gyms, hair salons and other businesses.

Lawmakers in more than half the states have filed bills this year to limit gubernatorial powers during the pandemic and other emergencies, according to the National Conference of State Legislatures. Most legislatures began their sessions this month.

Kentucky’s Republican-led Legislature could consider as soon as next week whether to override Democratic Gov. Andy Beshear’s vetoes of several bills that would rein in his emergency powers.

Wisconsin’s GOP-controlled Senate voted earlier this week to repeal Democratic Gov. Tony Evers’ emergency health order, which would end the state’s mask mandate. The Republican-controlled Assembly called off a similar vote Thursday in the face of criticism from health, school and business leaders and concern that it could jeopardize more than $49 million in federal aid.

Wisconsin Republicans have argued that Evers exceeded his authority by issuing multiple emergency declarations during the pandemic, which enabled him to extend the mask mandate beyond the 60 days allowed under the law without getting the Legislature’s approval.

Evers contends that the changing nature of the pandemic warranted new emergency declarations.

The amendment Pennsylvania Republicans are seeking to place on the May ballot also would put a cap on the governor’s disaster declarations — 21 days, unless lawmakers vote to extend them. The Legislature also could halt them at any time with a two-thirds vote.

Wolf has said that prematurely ending his disaster declaration would itself be “disastrous” for the state and that requiring repeated legislative approval “could slow down or halt emergency response when aid is most needed.”

In Michigan, House Republicans have threatened to withhold billions of dollars for schools unless Democratic Gov. Gretchen Whitmer cedes her administration’s power to prohibit in-person instruction and sports to local health departments. Whitmer called the move “cruel and reckless.”

Whitmer was the target of an alleged kidnapping plot last fall by anti-government extremists upset over her coronavirus restrictions.

Though legislative resistance to executive coronavirus orders has fallen largely along partisan lines in some states, lawmakers elsewhere are pushing back against governors of their own parties.

Republicans in the Arizona Senate want to end the broad emergency powers that GOP Gov. Doug Ducey has used to limit large gatherings and business capacities.

Ohio Sen. Rob McColley introduced a bill this week that could rescind emergency health orders issued by Gov. Mike DeWine, a fellow Republican. It would create a committee to retroactively review them. DeWine vetoed a similar bill last year.

McColley said the Legislature needs to take action “when the relatively unfettered power of the executive branch during a time of emergency has lasted as long as it has.”

Finally, USA State politicians are annying-up against tyranny? Well, isn’t that special AND late to the party? JUST DO IT!!

They will be told that they will lose Federal funding and they will drop their legislative attempts to change anything. They have been cornered a long time ago with this strategy. Now if they really had balls they would tell the Federal Government that any federal money they lose will come out of State Income Tax transfers.

I’m wondering why not California? Ours is as bad if not worse?

Seems like these mandates – lockdown, mask, etc. – are no longer updating themselves on the science – there is no more linkage to science and Fauci doesn’t issue any citations on his prognostications. We need states to conduct online debates with hundreds of scientists so we can really see the truth. Vaccine promoters have too strong a stranglehold on our policies.

A governor should not be allowed to veto any legislation that limits his/her power, nor should a president. That’s like letting the fox guard the henhouse. Most of us Buckeyes are so sick of the rules, especially the one that businesses must close between the hours of 11 pm and 5 am (as if the virus is only contagious during those hours!).