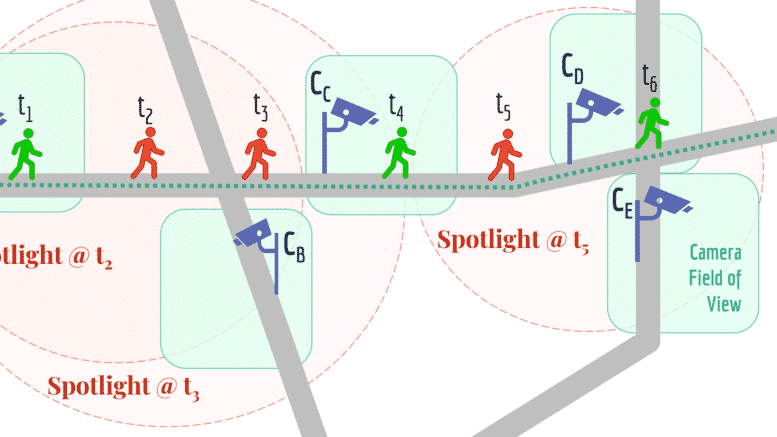 Please Share This Story!
PDF 📄
Technocrat engineers are advancing surveillance technology at breakneck speed. India’s latest invention can co-opt thousands of cameras to track individuals or vehicles in real time as they move about. This is ubiquitous, full-time surveillance that could completely destroy privacy. ⁃ TN Editor
The future of total police surveillance just got a whole lot bleaker, thanks to researchers at the Indian Institute of Science (IISc). IISc researchers have figured out a way to turn a vast network of CCTV cameras into one massive surveillance network, which can target a specific vehicle or person.

Anveshak, the Hindi word for “investigator” gives law enforcement the ability to overlap the camera feeds from a thousand CCTV cameras to track an individual person[s].+

“Anveshak has the big-picture ability to know the locations and overlap points of 1,000 camera feeds, as well as possible paths an object (such as a stolen car) or person could take through those feeds, critical details in limiting what would otherwise be an unfathomably large quantity of video data coming from multiple cameras.”

The Anveshak platform will now allow police use CCTV cameras to track or “spotlight” a person through blindspots.

“The system creates a spotlight on the tracked subject, dynamically adjusting the size of that spotlight based on known gaps in camera coverage; for example, four cameras might be monitored for the subject’s arrival in situations of ambiguity, decreasing to only two cameras where their coverage is better and the subject’s route more obvious.”

The IISc’s attempt at explaining how law enforcement can use it to track missing people is really just a veiled attempt at showing governments how police could use the Anveshak platform to ID and track people of interest.

“The spotlight algorithm narrows the search space for analyzing video feeds if the missing person is found within a camera’s field of view. It gradually expands the set of video feeds analyzed when the person falls in a blindspot between cameras. This intelligence helps reduce the computation required for analyzing videos from thousands of cameras while not sacrificing accuracy.”

The “spotlight” AI algorithm is unlike anything we have seen before.

Anveshak will allow law enforcement to use a vast network of public and private surveillance cameras to track an individual persons movement’s between blindspots.

“Researchers at the IISc have developed a novel software platform from which apps and algorithms can intelligently track and analyze video feeds from cameras spread across cities. Such analysis is not only useful for tracking missing persons or objects, but also for “smart city” initiatives such as automated traffic control.”

Don’t be fooled by IISc’s claims that law enforcement will only use Anveshak to track stolen cars or missing person’s.

History has shown, how police have used smart AI’s to identify and track people of interest like; Occupy Wall St., and Black Lives Matter protesters.

“NYPD police camera teams were deployed to hundreds of Black Lives Matter and Occupy Wall Street protests from 2011–2013 and 2016. Originally acquired through a Freedom of Information Law request by New York attorney David Thompson of Stecklow & Thompson, the records are job reports from the NYPD’s Technical Assistance Response Unit (TARU) that document over 400 instances in which the unit’s video team attended, and sometimes filmed, demonstrations.”

“Peter Swire, a law and ethics professor at Georgia Tech who recently served on President Obama’s Review Group on Intelligence and Communications Technologies, said that as the government concentrated on fighting terrorism, guidelines that had restricted the monitoring of political activity were relaxed. As a result, he said, even minor offenses like trespassing can be enough to trigger surveillance of political groups.”

Both The Verge and the New York Times did a great job of revealing what happens when police are given access to public surveillance devices, like facial recognition and CCTV cameras.

Anveshak does for police surveillance what digital electronics (4K) did for old tube-style televisions. It totally changed the way people view things.

“In a recently published paper, the researchers show how Anveshak can be used to track an object (like a stolen car) across a 1,000-camera network. A key feature of the platform is that it allows a tracking model or algorithm to focus only on feeds from certain cameras along an expected route, and tune out other feeds. It can also automatically increase or decrease the search radius or “spotlight” based on the object’s last known position.”

The quality of police surveillance cameras can be likened to 4K television’s clarity.  Just like 4K changed the way we come to view TV’s with its amazing quality, Anveshak will change the way police view the public’s privacy forever.

A network of a hundred, five hundred or a thousand Anveshak connected surveillance cameras means that once a person enters a business like a Walmart, Rite Aide, Home Depot, or a Lowes; they can be ID’d and tracked in real-time with no lapses in coverage. The same can be said for public transportation with their DHS-funded public surveillance cameras being installed in buses, trains and public platforms throughout the country.

Anveshak gives law enforcement the ability to “spotlight” anyone, for any reason, no matter where they are. Anveshak’s platform will transform police surveillance as we know it, soon Big Brother’s gaze will be omnipresent.

“History has shown, how police have used smart AI’s to identify and track people of interest like; Occupy Wall St., and Black Lives Matter protesters.”