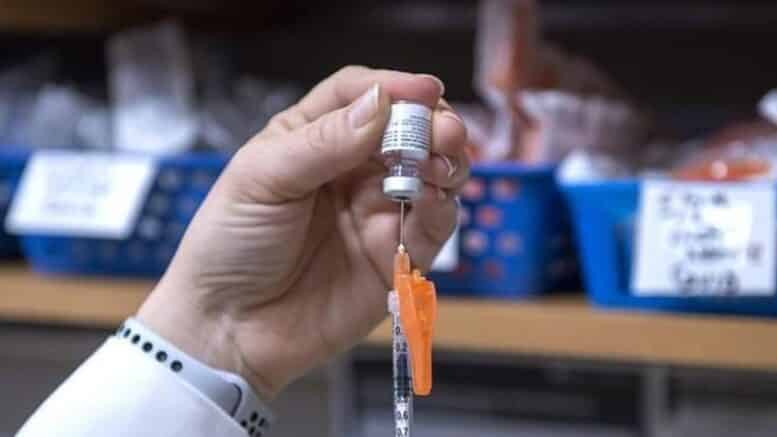 Posted By: Veronika Kyrylenko via The New American June 28, 2022

Please Share This Story!
PDF 📄
As the war with Technocracy expands, dead bodies and injured citizens pile up in record numbers. In WWII, America lost 405,000 soldiers with 670,000 wounded. This genocide is of epic proportions and yet the vast majority of people are in denial that there is even an issue, as they line up for their mRNA boosters. ⁃ TN Editor

The United States federal bodies responsible for the nation’s healthcare policies keep turning a blind eye to the devastating number of deaths and injuries associated with experimental gene therapeutics against Covid, aka Covid vaccines. All severe reactions to the shots are proclaimed “rare.” Steve Kirsch, California tech entrepreneur and founder of the Vaccine Safety Research Foundation (VSRF), has estimated that the shots have left as many as five million Americans unable to work, 30 million injured, and more than 750,000 dead, as of June 24, 2022.

According to the latest survey conducted by Pollfish on behalf of the VSRF, vaccines are associated with a very high number of adverse reactions, including lethal and life-altering ones. That means that the vaccinations should be halted immediately.

Our latest poll is devastating for the official narrative:

4. you’re more likely to die from COVID if you’ve taken the vaccine.

5. Almost as many (77.4% to be more exact) households lost someone from the vaccines as from COVID.

He went on to remind that, according to the official data, more than one million Americans have died “from COVID,” even though it is unclear whether Covid was the primary cause of death, since Rochelle Walensky, the director of the U.S. Centers for Disease Control and Prevention (CDC), admitted in January that 75 percent of Covid deaths occurred in people who had “at least four comorbidities.”

This survey indicates that over 750,000 people died from the vaccine…. Surprisingly, the ever-vigilant CDC hasn’t found anyone who has died from the mRNA vaccines. Not a single person. So that’s a gap of 750,000 people. That’s a big gap. Someone isn’t telling you the truth.” [Emphasis in original.]

Presumably, Kirsch is being sarcastic, calling the CDC “ever-vigilant” in light of last week’s report revealing that the agency has not been analyzing its own database,  the Vaccine Adverse Event Reporting System (VAERS), specifically designed to detect safety signals for the vaccines.

The other key takeaways from the poll include the following,

Regarding the poll methodology, it is noted that 500 people participated in the survey and were selected entirely at random. With a 500-sample size, the results can vary by a factor of 2 or more, so the VSRF is planning to re-run it with a larger sample size of 8,000 participants.

Authorities must stop doing the safety dance. One does not jive, shuffle, or limbo, or jitterbug within the reach of a potentially loaded gun pointed a them.

The sample is way too small to mean anything one way or another Show me a million confirmed and validated responses then we will have proof. This is no different than the garbage put out by CDC and Big Pharma.

Charles,the garbage put out by the US death creators and anti-health oversight agencies are not worth mentioning as being garbage. Garbage is useful. Furthering a genocide is diabolical. How about you go do a survey and put a few weeks of work into this genocide so we can call your work “garbage”. We all know what this is and since we are only a year into the side effects you can better your bottom Fed note that what Mr. Kirsch has worked to put together is light years closer to the truth than any of the garbage we have been… Read more »

Yes. I’m surprised your comment hasn’t been removed. Mine are … One has to laugh at the hypocrisy of it.

You are correct about the sample size, but this isn’t completely uncommon when dipping into topics or science. You dip your toe into the water first to see whether the expenditure might be worth it prior to committing to a larger survey should the results point that you are onto something. So, whilst I agree about the sample size, you appear to be very condemning of efforts people are making to expose this massive tragedy that has occurred. And THIS I disagree with. Always a critic and never a creator is a phrase that comes to mind here.

And now they’re going after the children. It’s sickening to hear them try to defend a “killer shot”. They have no shame at all, however.

Shame is a product of consciousness, or conscience. Their is not the same as that of most humans.

And yet just today I saw a PSA telling me it’s “safe and effective” for infants. There has to be a special place in Hell for these people.

“Hell is empty and all the devils are here.”
~ William Shakespeare, The Tempest

The CV-19, the common cold and flu re-branded killed unhealthy people while the jab kills the healthy according to stats.

Local hospital says, “Until you arrive with at least your first round of Fiizer or ModeRNA, you will not be admitted for your kidney transplant. Should a kidney become available and you are not vaxxed, you will have to proceed to the end of the line and wait your turn again. No vax, no kidney. Oh, and we don’t provide you with the vaccination status of the kidney donor.”

Which MAY also mean that you may end up with a kidney from a vaxxed person, which may be compromised by spike proteins? Perhaps we need a register for unvaxxed to gift to the unvaxxed?

it sounds a bad news but if you know good doctors, kidney could be fixed, especially donation often means someone sometimes still alive was harvested (they do this in hospitals, this is not well-known yet is sadly true). Check dr Randy Tent. He has supplements that can hep kidneys to regenerate so as other organs… depending of course of each case. But this was known in folks medicine, to heal an organ is to eat of it, that’s why they took the food industry and have demonized every good nutrient that can heal. Peaple use to eat organs and give… Read more »

Consider that only 1 in 100 ever goes to the “VAERS” kangaroo court for fear doctors loosing their license. Then only 1 in 100 even win and the taxpayer is the one that pays. Since the 1976 Swine Flu fraud exposed by Mike Wallace on 60 minutes, all vaccine companies now have no liability while those who want to devastate the population and have what is left on GMO with internal communications Smart Dust computer transceivers, routers, and synthetic fibers attached to the Neurological system in every part of the body (this is the function of Aluminum as it attaches… Read more »

Survey: U.S. Vaccine Safety Research Foundation (VSRF), has estimated that the shots have left as many as five million americans unable to work, 30 million injured, and more than 750,000 dead, as of June 24, 2022 – Infokeltai

My God, tears in my eyes, how can people be so cruel. EYE FOR AN EYE, It’s very very hard not wanting to hurt these people doing this. IT NEEDS TO STOP!

YOUR LIFE NOW DAYS JUST BECOMES A STATISTIC, A NUMBER IN MILLIONS OF OTHERS.