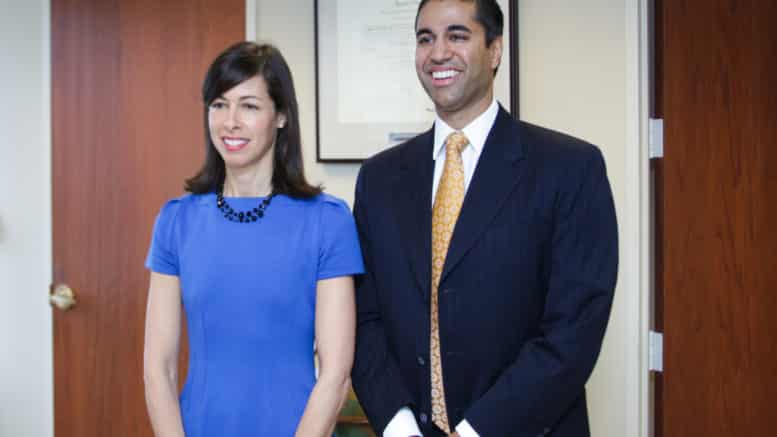 Please Share This Story!
PDF 📄
Newly imposed tariffs are forcing an important issue into the spotlight: America is dependent upon China to provide the bulk of switches, routers and circuit boards to rollout 5G. What’s the problem? A leading supplier of 5G tech, Huawei, is closely tied to the Chinese government.  ⁃ TN Editor

The latest round of tariffs on Chinese imports will be “wildly detrimental” to the United States’ rollout of 5G, a member of the Federal Communications Commission (FCC) warned Thursday.

Commissioner Jessica Rosenworcel warned the tariffs will hit equipment such as antennas, switches, routers, equipment for the re-transmission and generation of voice, data and images, as well as circuit boards. President Trump announced additional tariffs on $200 billion of imports from China this week, with duties initially set at 10% starting Monday and rising to 25% at the beginning of 2019.

“There’s nothing theoretical about it,” Rosenworcel said at an event hosted by media company Politico. “And I think it is wildly detrimental to our ability to lead in 5G. The FCC can’t afford to put its head in the sand. We need to start speaking out.”

Telecom companies have been bullish on rolling out 5G either at the end of this year or the beginning of next, but Rosenworcel warned the tariffs will “harm our ability to lead” on the technology, which is rolling out in countries like China and Singapore. A study last month by Deloitte found China has outspent the United States by $24 billion on 5G infrastructure.

Rosenworcel also warned that the United States’ ability to lead on 5G is also being hampered by the lack of urgency in rolling out the small cell infrastructure necessary to support the faster network speeds promised.

Her fellow FCC Commissioner Brendan Carr agreed in earlier remarks, ahead of a vote next week by the full commission that would streamline rules around deploying said infrastructure. Carr’s proposal would preempt local laws that look to prohibit deployment of wireless service, places limits on the fees required to install the infrastructure, and shorten the required review period.

That plan gets a vote next week, and has already come in for criticism from the U.S. Conference of Mayors and the National Association of Counties, but Carr said it is necessary given how the United States lags behind China on installing 5G infrastructure.