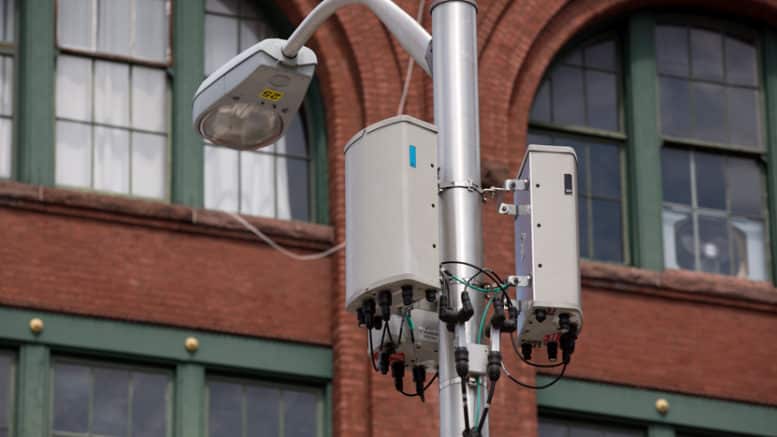 Please Share This Story!
PDF 📄
Thanks to carrier lobbying, twenty states have already passed legislation to strip their cities of the power to regulate 5G rollouts. Cities are fighting  back with lawsuits to restore local control and ability to set fees and address health concerns. A Technocrat state Senator in Texas says, “We should keep government out of the way of technology and let technology get us all there.” ⁃ TN Editor

Back in 2016, several major phone carriers approached the city of McAllen, Texas, about building state-of-the-art 5G wireless networks. With the promise of ultra-fast internet connection speeds and an array of potential commercial and public applications, city officials eagerly entered into discussions about amending local ordinances to accommodate the necessary infrastructure. Months later, they were close to reaching an agreement on establishing a large-scale pilot program.

It all started to unravel, though, when McAllen and other Texas cities heard about a proposal in the legislature setting statewide rules for 5G installation and prohibiting local governments from negotiating their own deals. McAllen City Attorney Kevin Pagan says the wireless providers initially assured him they weren’t interested in asking for state legislative help. But then the bill started gaining traction. Company representatives stopped responding to Pagan’s emails about the licensing agreement, and he says he hasn’t heard from them since.

The legislation sailed through both chambers and was signed into law last spring. McAllen has joined other Texas cities as lead plaintiff in suing the state over the bill. “I’d like to say it was a fight, but when the score has already been determined in advance before the starting gun goes off, it’s difficult to call it a fight,” Pagan says. “Nothing that we suggested of any substance was [included] in S.B. 1004.”

Across the country, telecom companies are beginning to lay the groundwork for 5G wireless networks. The buildout often pits states against cities, as in Texas. But a proposal that the Federal Communications Commission (FCC) is set to vote on Sept. 26 would not only upend future local agreements, but also preempt states. If approved, localities across the country would have drastically less authority over 5G infrastructure.

The arrival of 5G represents a major advancement in wireless technology. It’s expected to provide speeds at least 10 times faster than the typical 4G connection that many places now have. Testing is underway in select cities, and the FCC will start auctioning licenses for 5G spectrum in November. The first 5G-compatible smartphones are expected to follow next year.

Some localities are already looking to use the technology in ways that go well beyond improving internet speeds. Kansas City, Mo., partnered with Cisco and Sprint on building a public Wi-Fi network covering part of the city’s downtown. It supports pedestrian sensors and interactive kiosks along a streetcar line. Bob Bennett, Kansas City’s chief innovation officer, envisions a litany of potential future applications once 5G is enabled. Air quality and temperature sensors detecting pollution, he says, could play a role in determining where kids wait for buses. Others have hailed 5G as crucial for transmitting data to autonomous vehicles.

The key building blocks of 5G networks are small-cell antennas interwoven throughout city infrastructure, affixed to streetlights, utility poles or buildings. Providers typically describe them as the size of pizza boxes. But in actuality some of the antennas are much larger, while others are hardly noticeable at all. They generally need to physically connect to wireline fiber, so the first places expected to get 5G are densely populated urban areas with high consumer demand and existing fiber networks. One study conducted by the municipal advocacy group Next Century Cities, of jurisdictions considered to be leaders in technology, reported that 60 percent of communities with a wireline fiber connection to residences had small cells in place, while the same was true of only a third of those without existing fiber.

Unlike cellphone towers, small-cell nodes have limited range and poor ability to send signals through physical barriers. So telecoms may need to install hundreds of small cells to cover a relatively small area — an undertaking that becomes cost-prohibitive in less urbanized areas. For this reason, Blair Levin, a former FCC official who oversaw the National Broadband Plan, says 5G is likely to further widen the digital divide that has disadvantaged parts of rural America.

Supporters of the FCC proposal and state laws governing 5G frequently maintain that the laws will speed up construction, as well as potentially facilitate its use in currently unserved areas. In their pitches to Nebraska state lawmakers last year, lobbyists argued that a statewide rule would accelerate rural deployment. Citing comments provided by telecom providers, the FCC proposal similarly concluded that “resources consumed in serving one geographic area are likely to deplete the resources available for serving other areas.”

But local officials contend that carriers won’t bring their 5G networks to outlying areas absent market demand. “There is not a shred of evidence that suggests a penny saved in New York immediately gets invested in Montana,” Levin says. McAllen’s Pagan adds that his city offered companies a “healthy subsidy” to deploy internet service in unserved areas, but they weren’t interested.

What’s certain is that the FCC wants to lower the cost of deployment. As of early this summer, 20 states had enacted legislation aimed at facilitating 5G small-cell deployment, according to the National Conference of State Legislatures. FCC Commissioner Brendan Carr has stated that the order wouldn’t alter nearly any provisions of the 20 existing state laws. But any that do not satisfy the proposed federal rules would be preempted.