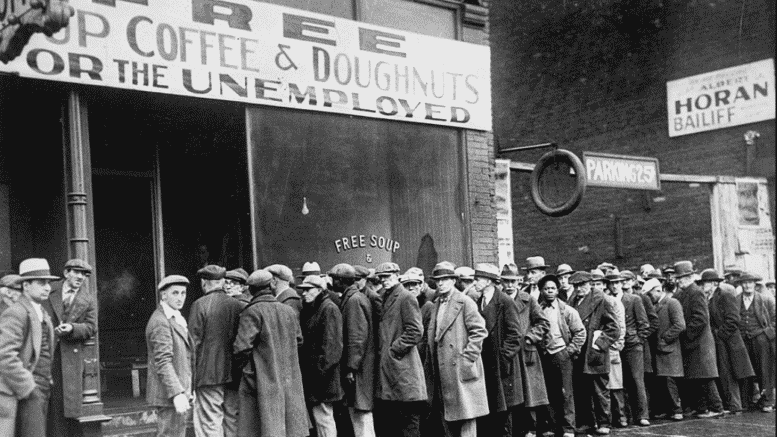 Please Share This Story!
PDF 📄
The Technocrat-induced hysteria over COVID-19 has led to the utter destruction of Free Market Economics, making way for Technocracy, aka Sustainable Development. Over 50 million Americans have now filed for unemployment since lockdowns began.

Despite the hope-restoring nonfarm payrolls “recovery” and the over-hyped bounce in ‘soft’ sentiment surveys (which are biased by their nature as diffusion indices to bounce back hard), for the seventeenth week in a row, over 1 million Americans filed for unemployment benefits for the first time (1.30mm was slightly worse than the 1.25mm expected). 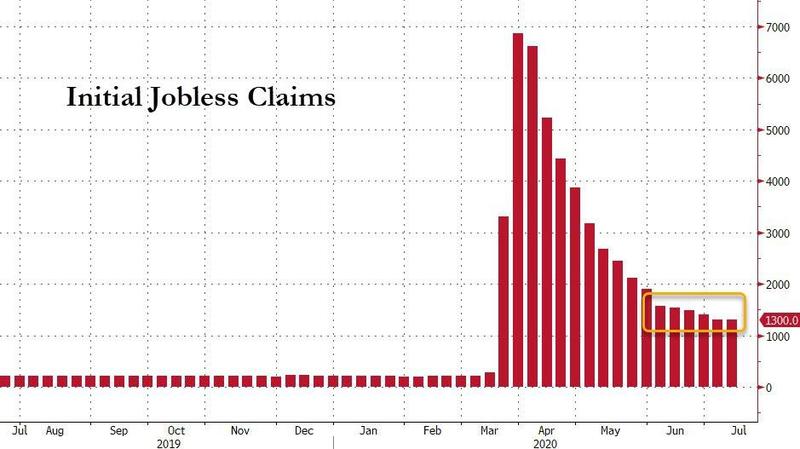 That brings the seventeen-week total to 51.275 million, dramatically more than at any period in American history. However, as the chart above shows, the second derivative is slowing down drastically (even though the 1.30 million rise this last week is still higher than any other week in history outside of the pandemic)

Continuing Claims did drop very modestly but hardly a signal that “re-opening” is accelerating! And definitely not confirming the payrolls or sentiment data… 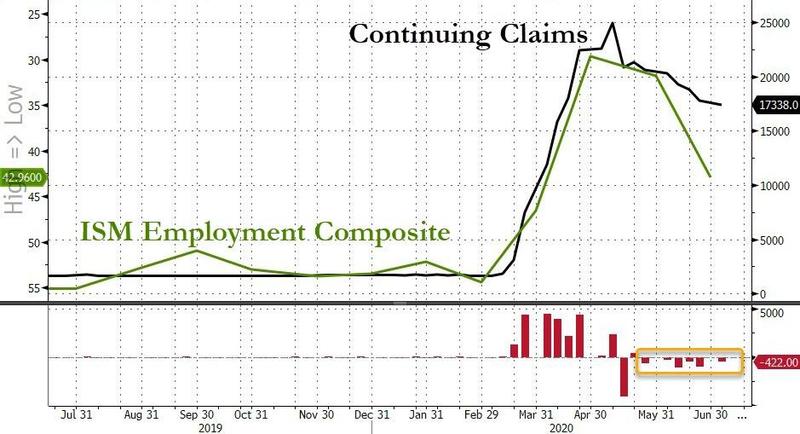 Broken down by state, it is perhaps not surprising that Florida which has seen a surge in new covid cases also had the biggest increase in initial claims, which rose by over 62K in the last week, more than double the 2nd biggest increase which was seen in Georgia. That said, a surge in covid cases does not explain why Texas, which has also seen a sharp increase in new cases, was the state with the 2nd biggest claims decline.

And as we noted previously, what is most disturbing is that in the last seventeen weeks, far more than twice as many Americans have filed for unemployment than jobs gained during the last decade since the end of the Great Recession… (22.13 million gained in a decade, 51.275 million lost in 17 weeks)

Worse still, the final numbers will likely be worsened due to the bailout itself (and its fiscal cliff): as a reminder, the Coronavirus Aid, Relief, and Economic Security (CARES) Act, passed on March 27, could contribute to new records being reached in coming weeks as it increases eligibility for jobless claims to self-employed and gig workers, extends the maximum number of weeks that one can receive benefits, and provides an additional $600 per week until July 31.

Yet I look in the Newspaper weekly and there are tons of ads for Help Wanted and no one is filling them with this available workforce. Why? Because even if you don’t lose your job because of Covid, you can still get $600.00 a week plus the regular unemployment benefits and food stamps (universal income). Why are they not telling people to fill other jobs? Because that is not their purpose. Small businesses are closing left and right because no one is filling the Help Wanted Ads. This did not just happen because of Covid, it has been happening for… Read more »