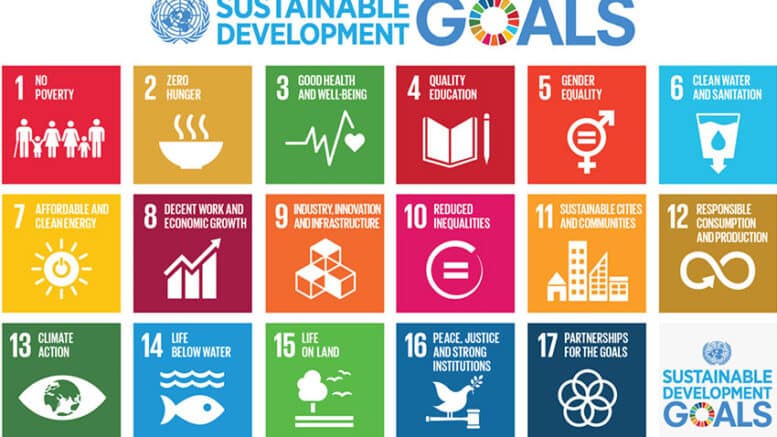 Please Share This Story!
PDF 📄
When the SDGs collapse, do not pass Go and go straight to Sustainable Development, aka Technocracy. The long-term UN goal to “decouple development and growth” spawns calls for “green bonds, sustainability bonds and impact investing .” ⁃ TN Editor

COVID-19 is exposing the fragility of the goals adopted by the United Nations — two-thirds are now unlikely to be met.

As COVID-19 batters the world and its economy, it’s time to rethink sustainable pathways for our planet. Rosy hopes that globalization and economic growth would bankroll waves of green investment and development are no longer realistic. It’s unlikely there will be enough money or attention to banish poverty and inequality, expand health care and overturn biodiversity loss and climate change, all by 2030.

The SARS-CoV-2 virus has already killed more than 512,000 people, disrupted the livelihoods of billions and cost trillions of dollars. A global depression looms. The United States and other nations are gripped by protests against structural inequality and racism. And geopolitical tensions between superpowers and nuclear states are at levels not seen for decades.

Things were different back in 2015, when the United Nations adopted 17 Sustainable Development Goals (SDGs) to improve people’s lives and the natural world by 2030. It was arguably one of humanity’s finest moments — the whole planet signed up. Many national budgets were flush with funds. Governments agreed ambitious treaties, including the Paris climate agreement, the Sendai framework on disaster risk reduction and the Addis Ababa plan for financing development.

Five years on, as the UN celebrates its 75th anniversary, that mood of optimism has gone. In other words, the very foundations on which the SDGs were built have shifted.

The success of the SDGs depends on two big assumptions: sustained economic growth and globalization. COVID-19 has torn these to shreds. The global economy is expected to contract by at least 5% this year, and the timeframe for its recovery is years, not months, if the past is any guide. Industrialized countries struggling to support their own citizens will not bankroll the development of others. Overseas development aid could drop by US$25 billion in 2021. The United States has announced its withdrawal from the World Health Organization. Increasing the scale of human activity on the planet looks foolish when it could open wells of new diseases once hidden in the wild, similar to COVID-19.

Governments have basic worries. Food security is under threat, because farm workers are unable to travel to harvest crops; prices of rice, maize (corn) and wheat are rising. The UN World Food Programme has just doubled its estimate of the number of people who are likely to face acute food shortages this year, to 265 million. Demand for cash crops, such as Kenya’s flower exports, has stalled. Ecotourism has collapsed. Even oil-rich developing countries such as Nigeria, Africa’s most populous nation, cannot sell their resources profitably in the global slowdown.

And the world will face further stressors in the next decade. More pandemics, yes, but also extinctions and the continued degradation of the ecosystems on which all life depends. Storms, wildfires, droughts and floods will become more frequent owing to climate change. Geopolitical unrest might follow. Mounting costs to address these will divert yet more funding from existing SDG targets. Last year alone, the United States experienced 14 separate billion-dollar disasters related to climate change.

COVID-19 is demonstrating that the SDGs as currently conceived are not resilient to such global stressors. As the UN’s High-level Political Forum on Sustainable Development meets (virtually) this week, delegates must chart a new course for the SDGs. As the world recovers from this pandemic, the forum must establish a few clear priorities, not a forest of targets. It should also consider which goals can be achieved in a less-connected world with a sluggish global economy.

“Scientists say an annual global lockdown of 3 months would be necessary to limit global warming to well below 2 degrees. Will we fight climate change as decisively as Corona?”

https://www.youtube.com/watch?v=wFDxzV0ITxc
They want to kill us all!