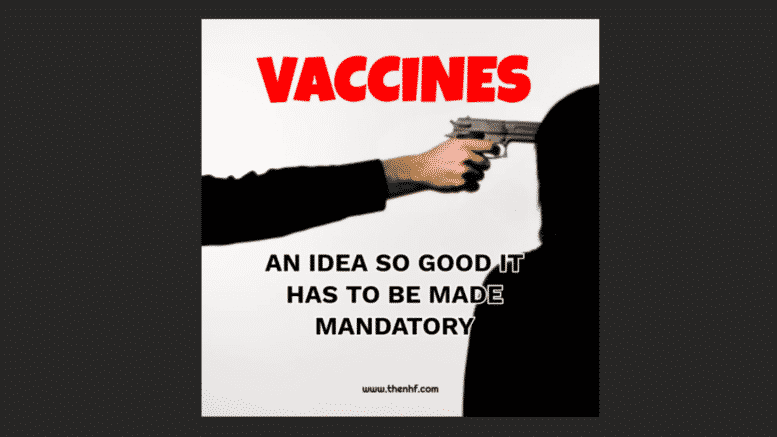 Please Share This Story!
PDF 📄
Technocrats who believe in “science says” have no problem in forcing everyone to follow its dictates. Thus, “mandatory” and “compulsory” become the normal, and just one step away from outright scientific dictatorship. However, like global warming pseudo-science, it is all based on subjective analysis, corrupted computer modeling and faulty data. ⁃ TN Editor

The official narrative has shifted from “we can beat the coronavirus” to “we can coexist with it but only if you follow our shifting instructions very carefully.” The pandemic has become endemic, going from something we can beat to “another virus that we’ll have to live with.” As far back as February, an article in Nature asked if we could ever be “coronavirus-free… [by maintaining] heavy restrictions… could the world hope to rid itself of the virus?”

Probably not. The good news from a San Francisco hospital coronavirus cluster is that the vaccinated don’t get very sick anymore. The bad news is that they can test positive. “At least 233 staff members at two major San Francisco hospitals, most of them fully vaccinated, tested positive for the coronavirus this month, and most, according to a hospital official, involved the highly contagious Delta variant.” However, few were seriously stricken.

Without vaccinations, Dr. Day said, the hospitalization rate would be much worse.

“We’re concerned right now that we’re on the rise of a surge here in San Francisco and the Bay Area,” Dr. Day said. “But what we’re seeing is very much what the data from the vaccines showed us: You can still get Covid, potentially. But if you do get it, it’s not severe at all.”…

Staff members at both hospitals have continued to wear personal protective equipment, Dr. Day said. But the number of staff infections reported in July is about as many as during the peak of the winter surge.

It’s like a science fiction story where the earth has been invaded by aliens, who can be contained but cannot be dislodged. This life form (the authorities think) comes from some Species X or Missing Link and nobody knows for sure what it will do next. “The virus becoming endemic is likely, but the pattern that it will take is hard to predict,” says Angela Rasmussen, a virologist from Georgetown University. Among the scenarios now envisioned are:

This shift in tone is a significant one because it sets the stage for an indefinite period of vigilance. Gone are the categorical expectations of quick triumph. In its place is a protracted total war where the key word is “mandatory.”

The headlines are full of the word:

Mandatory, compulsory, required and we might break even, cross our hearts and hope to die. But the problem with “mandatory” is that nobody can say how long it will take to work or, honestly, whether it will work at all. There is “No end in sight for COVID ‘Phase A’ on Australia’s path out of lockdowns,” writes ABC news. The sad truth is that many world leaders didn’t even know they would need a Plan B in the confident early days of fact-checkers. But we are now in a game dominated, not by the original coronavirus and the world of 2019, but by a new situation shaped by the public policy response since then.

Second Order Effect refers to the idea that every action has a consequence, and each consequence has a subsequent consequence. In other words, this means that a single decision can initiate a series of cause-and-effects, something which we might not have knowledge or control of. Therefore, it can be very difficult for us to predict possible implications of the original decision (unless we are somehow blessed with an all-seeing crystal ball).

We now live in the second-order world. “Get Ready for a Spike in Global Unrest,” writes Foreign Policy. What was supposed to be the summer of recovery has become the season of disaster.

To call 2021 the summer of discontent would be a severe understatement. From Cuba to South Africa to Columbia to Haiti, often violent protests are sweeping every corner of the globe as angry citizens are taking to the streets.

Each country has different histories and realities on the ground … butd they all faced a perfect storm of preexisting social, economic and political hardships which fallout from the Covid-19 pandemic only inflamed farther.

Though the problem is worst in the Third World, even European and North American countries face the same dilemma: how to fight this now-endemic disease without running out of economic energy that at some stage will mean stall, crash and burn — unless “mandatory” works before then.

The longer it takes for “mandatory” to work, if ever it does, the more political shibboleths will become unaffordable. At some point, fossil fuel taxes will become insupportable. Further on, perhaps “open borders” must go. Further still, even public-sector unions and academia will feel the pinch. Yet if history is any guide, ideologues will cling to their obsessions even at the cost of survival. “Mandatory” may give a false impression of light at the end of the tunnel when, as Slate writes, that is just a “noble lie.”

When experts or agencies deliver information to the public that they consider possibly or definitively false to further a larger, often well-meaning agenda, they are telling what is called a noble lie. …

Later in 2020, Fauci participated in a second noble lie. In December, he explained in a phone interview with then–New York Times reporter Donald McNeil that he had been moving the target estimate for herd immunity based in part on emerging studies. …

In his own words, he “nudged” his target range for herd immunity to promote vaccine uptake. Even though his comments were made to influence public actions to get more people vaccinated (a noble effort), the central dilemma remains: Do we want public health officials to report facts and uncertainties transparently? Or do we want them to shape information, via nudges, to influence the public to take specific actions? …

The epidemic of “mandatory” suggests that rather than becoming more flexible and adaptive before an endemic disease, the experts are hanging on to the mantle of certitude. Slate sadly concludes: “Noble lies are a trap. We cannot predict the public’s behavior, and loss of trust is devastating. The general population is far too skeptical to blindly follow the advice of experts, and far too intelligent to be easily duped.” True. And that loss of trust is how we arrived at mandatory.

Guess I will just keep on keeping on in spite of the fear campaigns.
My apartment owner is probably always masked when I see him.
Not me. The staff here are pretty well masked although I have seen some lifting so they CAN breathe.

In the beginning of this mishiva I told a friend, an intellectual who believes everything he hears from ‘officials’ or tries to excuse them when they lie, that anyone with two brain cells to rub together could sense a palpable ruse afoot.

Why? Their desperation STINKS of subterfuge. Take a whiff of mandatory.

You are right, what they Really want is the ‘Covid-pass for complete control and to start the NWO. IBM who worked with the Nazis collecting information for genocide of the Jew’s are the people now in chatge of making these covid passes worldwide.

“We’re concerned right now that we’re on the rise of a surge here in San Francisco and the Bay Area,” Dr. Day said. “But what we’re seeing is very much what the data from the vaccines showed us: You can still get Covid, potentially. But if you do get it, it’s not severe at all” Oh this is really frustrating? People are probably stupid enough to believe dribble. For most people, getting covid wasn’t severe. Most people probably didn’t even know they had it. It was never a threat, but watch them hijack the lack of severity before vaccines and… Read more »

[…] Technocrats Created An Epidemic Of Mandatory […]