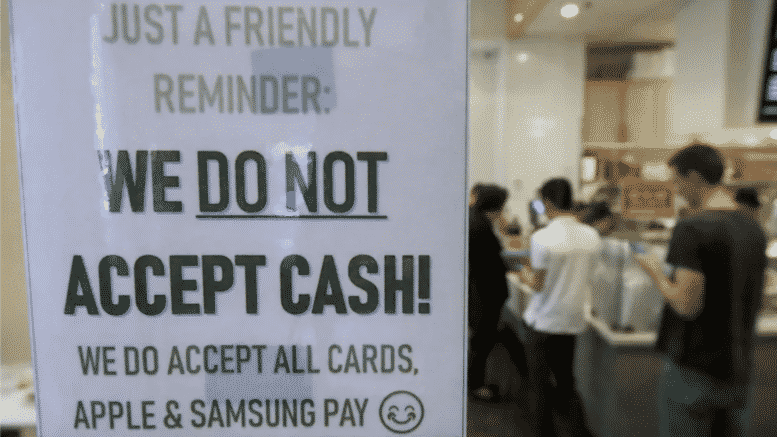 In our bizarre economy, we hear many things, and ideas are constantly being thrown out to us. This all tends to flow together and help us develop a strategy as to how we should cope with the changing times. One thing we continue to hear is that a war is being waged to eliminate cash. Not only are most people going along with this but many have embraced the notion.

Some people view carrying cash as dangerous or burdensome. This also dovetails with their desire to spend more than they can afford, when using a credit card it is far easier to continue spending money you do not have. All things considered, when asked, is the war on cash a real thing being directed from those on high, sadly we must answer yes. Cash reflects “options for the people” and it appears those in charge of such things want in gone.

Currencies were developed to facilitate and ease transactions between individuals and businesses. The war on cash is simply another way Washington can continue to show its favoritism towards big business. Small businesses often rely more on small cash transactions and often lack the ability to process other forms of payment. It is ironic that while big businesses and companies like Amazon flourish with each move government makes, the small businesses on Main Street are left worse off.

A cashless society where records are made and kept reflecting every transaction we make even down to buying a candy bar also allows the government to monitor our every move. This is something Big Brother-type governments strongly aspire to under the guise it will extend its ability to protect us or tamp down on crime, tax evasion, and corruption. For some reason, they seem to think this will allow them to collect more taxes, yet it comes at the same time they continue to tilt the tax code in favor of massive companies.

The way the government has handled coins during the pandemic is a clear indication of its unconcern over the role cash plays in our economy. When coin shortages developed, little or no effort to straighten out the mess was instituted. Considering the massive number of coins sitting unused in jars and cans across America it is a situation that could easily be resolved. In fact, coinage has yet to return to full use following the pandemic, and claims of coin shortages persist.

Another place this “war on cash” is showing its head is that as of July 1st my bank started to charge a “cash handling fee” of 13 cents per hundred dollars. Simply put, banks want and feel they are in a position to charge customers for the “inconvenience” of having their employees handle cash.

Let me be clear, banks, saving accounts, and other vehicles designed to hold cash are paying little or nothing in the way of interest. With the numbers just out that the CPI is up for the 15th straight month, cash is under assault.  this reflects the fourth straight month above 5% on a year-over-year basis.

While this is the first time the month-over-month CPI has come in below expectations since November 2020 that is not something worthy of celebration. The CPI is routinely criticized for understating and not accurately portraying the true rate of inflation. Another issue is this could be merely the Delta variant’s impact creating the illusion inflation is not rising as rapidly as some people think.

Inflation, currency debasement, and a slew of other problems have always haunted those holding fiat currencies. This does not mean placing your wealth into one of the new cryptocurrencies is the solution. It does not help that in our world where everything seems to be manipulated, central bankers and their ilk all seem to be moving in the same direction. The masses are trapped in a box and the sides are slowly being moved inward.

Because central banks must keep a lot of liquidity in the system in order to keep it functioning, we have the potential of reaching the place where we drown in paper money and inflation soars. This would signify the end of this war on cash and that cash had lost. It is difficult to justify leaving your wealth in cash that is rapidly losing its value. As we stare into the face of rising inflation and possibly lower negative interest rates the reality that all fiat currencies are in trouble and this is just one big Ponzi scheme becomes very apparent.

How fast events unfold is impossible to predict. Just as important is the order in which the four major currencies fail. We have good reason to be concerned about this because it has the potential to strip us of our wealth and cause major disruptions throughout society. Until then, which may be years away, cash has value and plays a very important part in our lives.

The War On Cash Is Very Real, Not Just Speculation - United Push Back

The War On Cash Is Very Real, Not Just Speculation

They LEGALLY HAVE TO accept ‘LEGAL TENDER’!

Unfortunately the rule of law means nothing to the technocratic establishments.

If they have a business license on the wall, publicly displayed, then per the STATE statutes they must take cash. The UCC is codified within all the revised statutes/codes of each STATE/COMMONWEALTH OF. Find Article 1-3-603b within that codification and learn its meaning. then print it and carry it with you.

Thanks for this information.

“You will not be able to buy or sell unless you have the mark of the beast”.
What is going on in the entire global economic system comes straight from hell.

Don’t know about the “beast” but you are certainly correct that it “comes straight from hell” as it’s definitely evil.

The “Beast” equals a collective mentality that acts on emotion, instincts and blind violence instead of logic, common sense and the common-good. Nothing spiritual (do-unto-others) )globalising and destroying our world of true diversity, only beastly. I think perhaps someone who was able to put two-and-two together many years ago had this understanding. Go figure?

You must take the SEAL OF THE LAMB of God to be saved. Unless ye are reborn of water and spirit there is NO LIFE in you!

JOB POSTING – BANK OF CANADA – Solutions Architect – Central Bank Digital Currency Solutions Architect – Central Bank Digital Currency (bankofcanada.ca) The Project The Bank of Canada is embarking on a program of major social significance to design a contingent system for a central bank digital currency (CBDC), which can be thought of as a banknote, but in digital form. This project will require us to break new ground. It will take into consideration a wide variety of factors, including policy considerations, diverse stakeholder needs, difficult technical challenges and the development of a technical architecture to realize a CBDC… Read more »

Yes. I read this, too. I think you posted it earlier? If not, someone did. I passed it along to other sites, too.

Funny I went to a shop that accepts CASH ONLY the other day there is HOPE out there not to go along with the Great Reset if a community says NO THANKS, SAINT KLAUS! World Economic Forum: you will own NOTHING and you WILL be HAPPY. Ever microwaved a $100 bill? Why it goes POP? They’re putting RFID into the vaxxes too that’s why people’s arms are magnetized PERMANENTLY after injection site. You’re going to be tracked and branded like cattle with Luciferase in your bloodstream if you step out of line one little toe ALL YOUR BANKS frozen out… Read more »

The War On Cash Is Very Real, Not Just Speculation – David Icke

[…] The War On Cash Is Very Real, Not Just Speculation In the end, there can’t be any cash but an electronic system covering the world, so no one can buy or see without the Mark of the Beast. […]