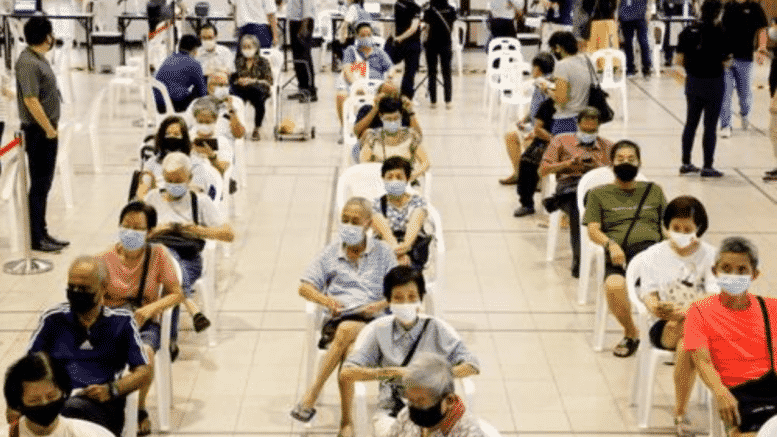 Please Share This Story!
PDF 📄
Singapore is a self-admitted Technocratic state. After vaccinating 80% of its population, new cases are soaring. The solution? More people need to be vaccinated. Thus, the blame is placed on the unvaccinated while the nation remains under severe mask mandates, social distancing, etc. ⁃ TN Editor

Singapore has just reached a level of vaccination penetration that many other developed economies would envy: 80% of its adult population has been vaccinated. And yet, it continues to struggle with one of the worst outbreaks yet. On Sunday, the nation of 5.7 million people reported 555 new local COVID-19 cases, the most since August 2020. One day prior, Singapore recorded its 58th COVID death, a partially vaccinated 80-year-old man with a history of diabetes, hypertension and heart problems.

Rather than lowering restrictions, Singapore’s Ministry of Health last week banned social gatherings at workplaces, allegedly because clusters of workers gossiping around the water cooler led to an outbreak. And in their free time, Singaporeans have been asked to attend one social gathering per day, tops.

A curious thing has happened since Singapore hit 80%, Cook reminds us: “The community cases have actually gone up since reaching 80 per cent coverage, in part because we’re allowing more social events for those who are vaccinated and, I dare say, more fatigue at the control measures,” Cook told the ABC.

And the outlook isn’t exactly positive: Gan Kim Yong, co-chair of the multi-ministry task force, said the “worrying” spike in infections would “probably get to 2,000 new cases a day,” describing the next two to four weeks as “crucial.”

It’s a lesson that’s not unique to Singapore; “One main lesson from across South-East Asia is that it is incredibly hard to prevent Delta’s spread and, as Singapore shows, even high vaccination rates will not help that much,” Cook added.

While they’re mostly symptomatic, Singapore is still finding a lot of breakthrough infections among the vaccinated. At this point, it’s only the latest piece of evidence to suggest that even the revised official efficacy rate of the Pfizer jab just isn’t realistic when we look at the case numbers.

Another scientist said the continued spread is merely a sign that 80% vaccinated is still “too low for delta”. Leong Hoe Nam, an infectious diseases expert from Singapore’s Rophi Clinic, said the Delta strain had moved the goalposts, in terms of what level of community vaccination was necessary.

But looking at recent waves of COVID infections in the US, Europe and in Asia, it’s starting to look like that virus simply adapts so quickly, vaccines just aren’t effective enough. Maybe natural immunity is the better rout after all.

“Another scientist said the continued spread is merely a sign that 80% vaccinated is still “too low for delta”. Leong Hoe Nam, an infectious diseases expert from Singapore’s Rophi Clinic, said the Delta strain had moved the goalposts, in terms of what level of community vaccination was necessary.”

Merely a sign? A ridiculous LIE and really STUPID, given that the stated data is supposed to be accurate at 80% vaxxed. Another scientist’? Doubtful he/she is even a real person and less doubtful he/she is a scientist of any type if real.

The so-called medical experts are just making any old junk up to explain away their failed predictions and hypotheses. This is now about arse-covering, if you’ll excuse my French. The overwhelming conclusion I must come to is that the medical authoritarians running the show have very little competence and very little experience of infections or ‘pandemics’. For example, in the field of virology it has been an accepted fact that viruses (though no-one has EVER been able to isolate any virus associated with any disease) it’s a truism to say that so-called viral particles are very very small. Yet this… Read more »

“…is like holding a tennis racket up to your face as a remedy for hay fever.” On target and VERY funny. Thanks for the laugh. I’ve read a number of books where governmental science is called out for it’s general stupidity and evil actions. Why would a government want anyone but the best, smartest scientist(s) to address a problem? They do not care about the problem. They value ‘YES MEN’ above all else who ‘arse-cover’ (using your stellar French) them. The politico fascists of today, like the past, want an assurance that the scientists they hire will do exactly what… Read more »

Too bad they can’t settle for only killing, torturing and enslaving everyone who supports this nightmare by enabling the totalitarianism. I don’t care what happens to those “people.”

How did Einstein put it? “Doing the same thing over and over again while expecting a different result is the definition of insanity” (or in the case of these authoritarians mandating vaccinations … the definition of sociopathy).

People should be highly concerned that they are pushing flu shots WITH Covid vaccines. This will for sure make winter, a dark winter. You will not get accurate information on this. But I know I have only had 1 flu shot in my life and I had a horrible reaction. Some claim to even have gotten the flu from the flu shot. Is is possible that Covid came from the flu vaccines? You betcha.

There’s no end to the scamdemic and lies. When the goal is 7 billion terminated telling the truth would cause the little people to decline to get the jab..end up on a slab..wearing a toe tag.

Delta variance IS CAUSED BY the vaxxes… the vaxxed have 90% higher viral load than unvaxxed… case is not same as sickness…. sickness does not mean death… You can’t even smoke or chew gum in Singapore. I feel SORRY for all the enslaved people who will never know what freedom WAS before it was STOLEN from us by the elites. Hyperinflation is THROUGH THE ROOF and there won’t be any bailouts when it crashes! There is a godless culture atheistic state centric, no individual rights, its coming to USA! There they were wearing masks years before 2020 as in all… Read more »

[…] Singaporeans have received at least one dose, and nearly 80% have received two doses. However, COVID-19 case and mortality rates are skyrocketing.IM @ianmSCWell. Here comes Singapore. With one of the longest uninterrupted mask mandates in the […]

Truth is, it's Definitely a Pandemic of the Vaccinated - America Out Loud

[…] now unequivocally demonstrate, the vaccinated are the most sickened. To wit: A Sept. 2021 article, Cases Rise Despite 80% Vaccine Rate, notes Singapore has just reached a level of vaccination penetration that many other developed […]

Truth Is, it’s Definitely a Pandemic of the Vaccinated... – T-Room

[…] the vaccinated are the most sickened. To wit: A Sept. 2021 article, Cases Rise Despite 80% Vaccine Rate, notes Singapore has just reached a level of vaccination penetration that many other developed […]