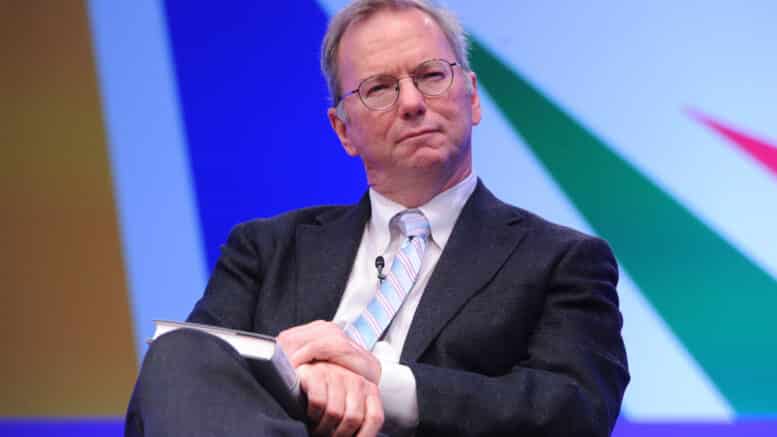 Please Share This Story!
PDF 📄
Prominent Trilateral Commission member Eric Schmidt is leading the charge to dominate the U.S. Defense department and hence, the Pentagon and all military branches. The Trilateral Commission is the original architect of the “New International Economic Order”, now known as the Great Reset.

What could the Technocrat cabal do with control over the biggest military complex in the world? Don’t overthink it. The answer is obvious: forced compliance for the coming Technocracy. ⁃ TN Editor

Former Google head has assembled a secretive fund with Washington insiders to help direct US national security investments—potentially to his own benefit.

Eric Schmidt has been quietly building an investment vehicle blending public and private funds that could grant the former Google CEO unusual influence over U.S. national security policy and, potentially, the opportunity to steer taxpayer money to his own bets.

The blandly named America’s Frontier Fund—which has so far received no media attention—will be led by a who’s who of the defense establishment combined with close associates of Schmidt’s ventures in business, finance and public policy. The high-powered investment vehicle appears to be modeled on In-Q-Tel, a nonprofit venture capital firm with close ties to the Central Intelligence Agency that has faced allegations of serious conflicts of interest among its trustees.

In fact, AFF will be helmed by the former chief executive of In-Q-Tel, Gilman Louie, and a former executive at Schmidt Futures, Jordan Blashek. A roster of well-connected defense insiders will populate the board and serve as its anchor funders, including Michèle Flournoy, former undersecretary of defense under President Barack Obama, former Secretary of Defense Ash Carter and H.R. McMaster, U.S. national security advisor at the Trump White House.

Also listed among the new group’s “Board of Directors and anchor funders”: Eric Schimdt himself, according to a draft press release briefly published on its website, which suggested it was preparing for an official launch as soon as this week. The draft release was viewed by TTP before it was taken down.

“This structure enables AFF not only to raise and deploy long-term private capital, but also to invest government funding designated for technology development,” it stated.

Other publicly available documents shed some additional light on the fund’s plans. A job posting noted that AFF’s “primary government clients” would include the departments of Commerce, Defense and Energy and, in the future, state-level clients. Blashek, AFF’s president, has described AFF’s average investment range as between $500,000 and $10 million, with a “sweet spot” of $1 million. (Similarly, In-Q-Tel’s investments “typically range from $500,000 to $3 million.”)

It is unclear whether the new fund and its principals will be subject to any governance controls to prevent abuse. One concern is that AFF could confer a special seal of approval by the U.S. government on highly speculative investments by its well-connected principals. The prospect of a government contract, especially in the lucrative area of defense, could generate outsized gains for early investors.

Another concern is that many of those involved in AFF are extremely well-connected in the U.S. government, in venture capital and in tech startups. It is unclear if any safeguards could prevent the principals from profiting from their inside knowledge and ability to direct public investments.

It is more than a theoretical issue. According to a 2016 report in the Wall Street Journal, nearly half of In-Q-Tel’s trustees had a financial connection with companies backed by the CIA fund.

The risk is particularly serious for Schmidt, who is reported to have “invested millions of dollars into more than half a dozen defense startups,” and could use his influence over AFF to direct public funds to startups in which he is an investor. According to the draft press release, the fund’s “initial areas of focus include microelectronics, artificial intelligence, and advanced networks (5G/6G).”

Schmidt invests in a number of startups that could benefit from AFF investments in these areas.

The new fund is the latest sign of Schmidt’s unusual and far-reaching influence in technology, investing and national security matters. Schmidt stepped down as Google’s CEO in 2011 and, four years later, as its chairman. During his time at the company, however, he amassed an estimated $19 billion fortune, which he has deployed in a wide array of investments in technology startups with potential military and intelligence applications.

At the same time, Schmidt has carved out an unusual role for a private citizen in shaping U.S. defense policy. From 2016 to 2020, he chaired the Defense Innovation Board, which provided advice to the U.S. defense secretary and other senior Pentagon brass on emerging technologies. Schmidt’s role in suggesting technologies and vendors to the Pentagon reportedly stirred the concern of at least one government ethics official.

Underlining the close web of relationships, then Defense Secretary Carter, who will serve on the board of AFF, tapped Schmidt to lead the DIB.

From 2018 to 2021, Schmidt also chaired the National Security Commission on Artificial Intelligence (NSCAI), which advised Congress and the White House on ways AI could be used to address U.S. defense needs. That work appears to have set the stage for the creation of AFF.

In late 2021, as the work was concluding, several of Schmidt’s close associates formed AFF. The fund appears to fill a role suggested by the Schmidt-chaired NSCAI: In its final report, released in March 2021, NSCAI recommended the establishment of a “joint emerging-tech investment consortium” modelled on In-Q-Tel. As envisioned by Schmidt’s NSCAI, “the consortium would spur investment by the United States and foreign partners in early-stage companies to further development of AI technology that advances and/or protects democratic values.”

A current listing of the board on the AFF site does not include Schmidt. But the organization includes several individuals with longstanding ties to Schmidt. They include Eric Braverman, the CEO of Schmidt Futures, a Schmidt investment fund, who is an AFF board member. Flournoy, another AFF board member, is a co-founder and managing partner of WestExec Advisors, a well-connected Washington consulting firm.

Schmidt and Flournoy have worked closely together in recent years. WestExec Advisors has worked with Schmidt Futures, as well as Google’s think tank Jigsaw, which Schmidt also founded. Flournoy appeared on a 2019 NSCAI panel and the commission’s final report repeatedly cited her writings and public comments. Schmidt and Flournoy also appeared together on a 2021 Washington Post panel on the digital transformation of the military, and they co-hosted a virtual fundraiser for Joe Biden in September 2020.

Several other members of AFF’s leadership also have close ties to Schmidt. AFF’s CEO, Gilman Louie, was a member of Schmidt’s NSCAI and a consultant to the Defense Innovation Board.

Louie was the original CEO of In-Q-Tel, the nonprofit strategic investor that is funded by the CIA and other agencies in the intelligence community, and his relationship with Schmidt may date back to the early years of that organization. In 2003, In-Q-Tel invested in a satellite mapping company called Keyhole. In 2004, Keyhole was purchased by Google, and it eventually became part of Google Earth.

Public-Private. You mean “fascist,” as in fascism being the merger of the socialist state with crony big biz? But don’t believe me.Download The Doctrine of Fascism by Benito Mussolini, its founder, at https://sjsu.edu/faculty/wooda/2B-HUM/Readings/The-Doctrine-of-Fascism.pdf Yeah, and the 4th estate “missed” this? Figures, since we are now fighting fasco-Marxism, and one of Gramsci’ tenets was to take over the media, which is now complete. Or as Charleton Heston put it: “Modern media fills the cultural airwaves with a mist of anesthesia, so that principles and values are slowly desensitized to the coming onslaught. The new culture arrives on the heels of this… Read more »