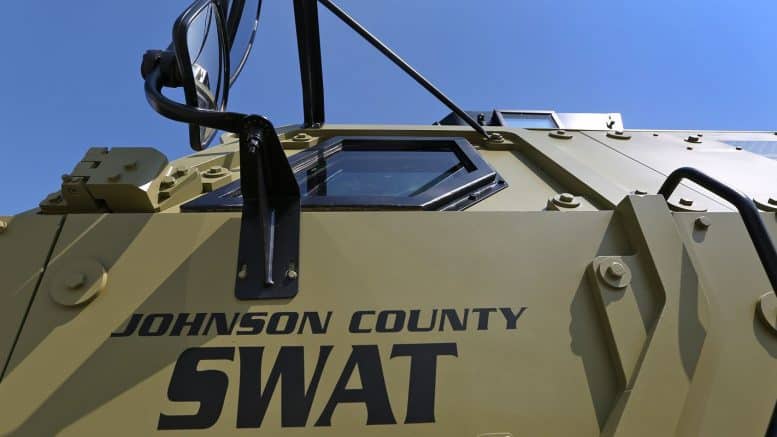 The militarization of police is the quickest way to spark a full-blown civil war, but does Trump and his military leadership understand this? Every senior military commander in the Trump Administration received early training when Posse Comitatus was in full force, which meant that the military could not be used on domestic soil against American citizens. Posse Comitatus was overturned by the John Warner National Defense Authorization Act and signed into law by George W. Bush on October 17, 2006. Bush lobbied in favor of the legislation. It was not the Democrats who did this to us – it was Republicans! ⁃ TN Editor

The Trump administration Monday lifted a controversial ban on the transfer of some surplus military equipment to police departments whose battlefield-style response to rioting in a St. Louis suburb three years ago prompted a halt to the program.

The new plan takes effect immediately and fully rolls back an Obama administration executive order that blocked armored vehicles, large-caliber weapons, ammunition and other heavy equipment from being re-purposed from foreign battlefields to America’s streets.

Attorney General Jeff Sessions, who led the  campaign for the program’s reinstatement, outlined the President Trump’s new executive order Monday in an address to the Fraternal Order of Police, the nation’s largest police union, suggesting that Obama’s directive was a concession to political pressure applied by civil rights advocates.

“We will not put superficial concerns above public safety,” Sessions told the group gathered in Nashville, Tenn. “All you need to do is turn on a TV right now to see that for Houstonians this isn’t about appearances, it’s about getting the job done and getting everyone to safety.”

The attorney general referred to post-hurricane rescue effort underway in Houston, where military vehicles and helicopters–part of the the Texas National Guard–were deployed to assist in the massive response.

The administration’s action, first disclosed by USA TODAY, would restore “the full scope of a longstanding program for recycling surplus, lifesaving gear from the Department of Defense, along with restoring the full scope of grants used to purchase this type of equipment from other sources,” according to a administration summary of the new program.

“Assets that would otherwise be scrapped can be re-purposed to help state, local and tribal law enforcement better protect public safety and reduce crime.”

Included in the gear are such things as rocket-launchers and bayonets. According to the Trump plan, the bayonets would likely be re-purposed as utility knives and the launchers used to shoot tear gas canisters, instead of lethal ammunition.

I would not go so far as to call Bush a republican, even though He is registered that way and ran as such. He and all of his ilk from Connecticut are closet liberals-Connecticut Yankees. I view him as a liberal/NWO type with fascistic tendencies. I seem to remember him saying “A dictatorship is OK as long as I’m the dictator”. Some patriot! GHW Bush is no better. All Skull & Bonesmen……Except Jebbie..