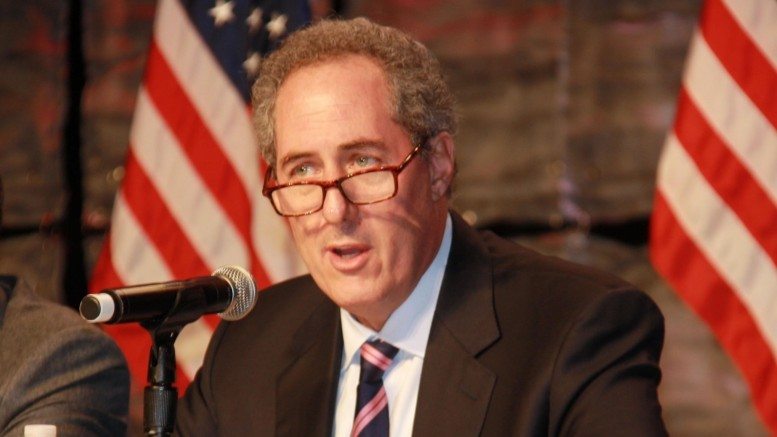 Please Share This Story!
PDF 📄
With a lame-duck president and a spineless Senate, if Obama sneaks TPP for a vote, it likely will pass. It is imperative to call your Senators and demand that they NOT vote for passage of TPP. Get your neighbors, friends, family, anyone, to CALL their Senators. Why? Because it will locking in Technocracy on a global scale! ⁃ TN Editor

U.S. Trade Representative Michael Froman says Congress has the votes to pass the Trans Pacific Partnership agreement if it is brought up for a vote.

“If they [House and Senate leaders] bring it forward, I think we can get the votes there,” Froman told NBC on Tuesday.

Hillary Clinton was a vocal proponent of the TPP–having reportedly praised the deal at least 45 times–and played a “leading part in drafting” the deal before she was eventually forced to distance herself from her prior support for political reasons.

Republican presidential nominee Donald Trump has previously argued that Clinton only says she’s against the TPP because she was “shamed” into doing so, and has warned that, if she is elected President, Clinton “will immediately approve it [TPP] if it is put before her.”

“Here’s how it would go,” Trump has explained, “She would make a small token change, declare the pact fixed, and ram it through. That’s why Hillary is now only saying she has problems with the TPP ‘in its current form,’ – ensuring that she can rush to embrace it again at her earliest opportunity.”

Indeed, during a recent CNBC interview, Bill Clinton said that the case for approving the TPP is “clear.” Similarly, just last week, Clinton’s running mate, Sen. Tim Kaine, seemed to leave the door open to the possibility that a Hillary Clinton administration would pass an Asian trade deal similar to the TPP, declaring “you never close the door” on passing this type of multi-national trade deal.

The Washington Post has reported that Clinton’s agenda on foreign trade would likely be advanced by Republican House Speaker Paul Ryan. Like Clinton, Ryan has been an enthusiastic advocate for globalist trade policies. In 2015, Ryan was President Obama’s “partner” in their effort to fast-track the Trans-Pacific Partnership. In a 2015 Wall Street Journal op-ed, Ryan described the TPP as an “historic” agreement which “would mean greater access to a billion customers for American manufacturers, farmers and ranchers.”

However, like Clinton, Ryan was forced to rhetorically distance himself from his prior support for TPP when faced with a primary challenge this past summer.

“After spending more than a year praising the TPP, and pushing through the Trade Promotion Authority (TPA) package needed to grease the skids for it last year, Ryan” backed away slightly from his former position as a result of his contentious primary battle in Wisconsin’s first Congressional district, Breitbart reported earlier this year. “I have my own problems with TPP. It is not ready,” Ryan said of the 12-nation trade pact in August– indicating that he’d be open to enacting a tweaked version of the agreement at a later date. While campaigning, Ryan told his Wisconsin constituents that he wouldn’t bring the deal up for a vote during the lame-duck session of Congress “as long as we don’t have the votes.”

Anonymous have released this video to “help stop our downward economic spiral and loss of national sovereignty” – ‘The SECRET strategy to create a new system: TPP, TTIP, TISA’.
Watch at:
https://www.youtube.com/watch?v=UlTuNSmiGQ4