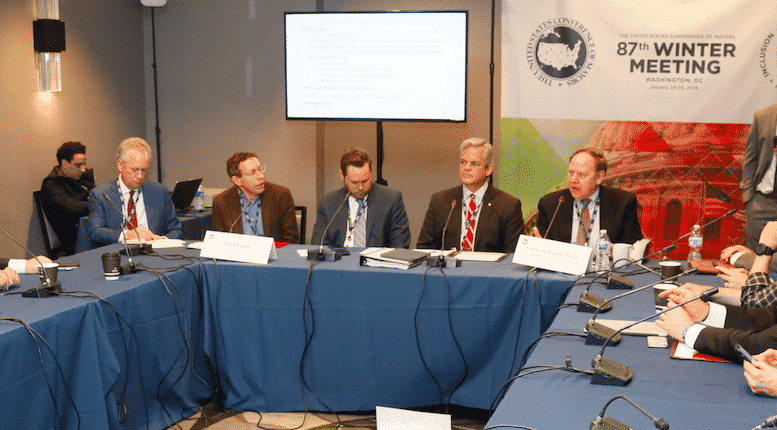 The USCM is an NGO that draws membership from all cities with at least 30,000 population. It’s purpose is to spread Sustainable Development, aka Technocracy, policies to every corner of America. Thus, America is going ‘smart city’; if you don’t like it, it can only be stopped at the city level. ⁃ TN Editor

A formal institute for smart cities has been launched by the US Conference of Mayors (USCM), during its Winter Meeting in Washington DC.

Steve Adler, Mayor of Austin, revealed it will help engage mayors around the three I’s: innovation, infrastructure and inclusion. One of the goals of the institute is to allow mayors to define their needs from a smart city.

“This is usually defined by vendors but in this space, mayors come together to define their priorities,” said Neil Kleiman, a professor at New York University’s Robert F. Wagner Graduate School of Public Service, who has been one of the founders of the new group.

Mayors can bring their challenges to the closed meetings and one of the goals is help them find a clear path forward for their initiatives and to then connect mayors with effective solution providers.

Greg Fischer, Mayor of Louisville, said that technology can be harnessed in ways that not only benefit citizens but which also can rekindle civic trust in government.

“Our ability to crowd source data has been very important around localised air pollution,” said Fischer. “With a GPS-enabled inhaler we can identify where pollution is most intense in the city and send out alerts for people with asthma to stay away from those areas.”

The key to using technology to build better cities is to fight against what Fischer called “digital red lining” by providing high-speed low-cost Internet and refurbishing hardware.

“We need to get digital inclusion into our policies. Your home is your city and not just the four walls you occupy.”