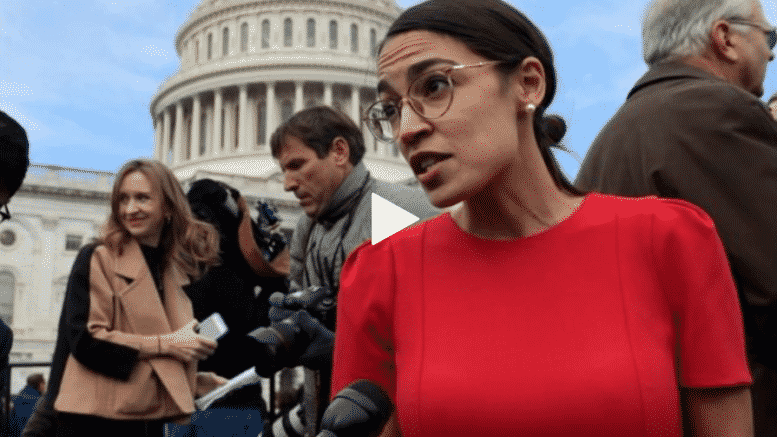 Please Share This Story!
PDF 📄
Ocasio-Cortez says her Green New Deal is “national, social, industrial and economic mobilization at a scale not seen since World War II.” It is 100 percent Sustainable Development, aka Technocracy.  If Technocracy gains hold, it will be the end of America and the beginning of total Scientific Dictatorship.

New York Democratic Rep. Alexandria Ocasio-Cortez on Monday unveiled new details on the so-called “Green New Deal” she plans to introduce in a matter of days, as she worked behind-the-scenes to rally congressional support for the proposal that could cost as much as $7 trillion.

Ocasio-Cortez, who is set to unveil the plan with Massachusetts Democratic Sen. Ed Markey, told her fellow representatives in a letter that the Green New Deal calls for a “national, social, industrial and economic mobilization at a scale not seen since World War II.”

“Next week, we plan to release a resolution that outlines the scope and scale of the Green New Deal,” Ocasio-Cortez said in the letter, adding that the country’s near-total economic transformation should take approximately ten years.

To raise awareness for the measure, Markey announced Monday he had invited Varshini Prakash, the co-founder of the Sunrise Movement environmentalist group, to be his guest at President Trump’s State of the Union addressTuesday night. (Several other Democrats announced guests apparently intended to highlight their opposition to various Trump administration policies, while Trump himself extended invites to the family of a couple allegedly murdered by an illegal immigrant and a child bullied at school for having the last name “Trump.”)

The Green New Deal proposal would lead to national net-zero greenhouse gas emissions, according to Ocasio-Cortez’s letter, “through a fair and just transition for all communities and workers,” while also generating millions of “good, high-wage jobs.” Details of the letter were first published by Bloomberg.

Through it all, the Green New Deal would additionally “promote justice and equity by preventing current and repairing historic oppression to frontline and vulnerable communities,” according to Ocasio-Cortez.

On Twitter Monday, Ocasio-Cortez reposted a claim from one of her advisers, Robert Hockett, arguing that “in this case, size matters” and that “the problems the Green New Deal addresses require solutions where bigger is better, imperative, and paraodixcally, more affordable.”

Hockett is a lawyer and law professor, and is not an expert in environmental policy.

Several analysts, meanwhile, have cautioned that the liberal firebrand is in over her head, even though the as-yet vague and uncertain details about the Green New Deal render a precise calculation impossible at the moment. Physicist Christopher Clack told The Hill that the cost would easily be into the trillions.

“It’s a daunting task, and I’m not sure that the authors of the Green New Deal fully comprehend how much they’ll need,” Clack said.

Institute for Energy Research president Tom Pyle was more blunt: “One hundred percent renewable energy defies the laws of physics. It would be impossible to achieve.”

And Paul Bledsoe, a strategic adviser at the Progressive Policy Institute, said progressives were overcompensating. “I understand the value of aspirational goals,” Bledsoe said. “My personal view is, that undermines the credibility of the effort.”

House speaker Nancy Pelosi, who has vowed to address climate change, has not publicly signed onto the plan, even though scores of progressive activists — joined by Ocasio-Cortez — staged a sit-in at her House office late last year, demanding action on the climate.

While there is no legislative text yet available for the Markey/Ocasio-Cortez proposal, a draft circulated by Ocasio-Cortez last week called for a committee to be formed to create a plan, and lays out a framework that includes eliminating greenhouse gas emissions from manufacturing and agriculture, while “dramatically” expanding energy sources to meet 100 percent of power demand through renewable sources.

Incoming Rep. Alexandria Ocasio-Cortez, D-N.Y., pledged to voters she would be a far-left outsider who would push her party toward adopting “democratic socialist” policies, including universal health care and free college tuition. So far, she has kept her promise.

Ocasio-Cortez has been calling for the creation of “Green New Deal” legislation, which would eliminate much of the United States’ fossil-fuel consumption. So far, Sens. Bernie Sanders, I-Vt.,  and Cory Booker, D-N.J., and 40 House Democrats have said they support the proposal.

In a draft resolution to create a House select committee that would be responsible for writing the Green New Deal legislation, Ocasio-Cortez outlines the primary goals of her plan. Among them, Ocasio-Cortez proposes eliminating all fossil-fuel-powered electricity, closing every coal and natural gas power plant in the country, thus destroying the hundreds of thousands of jobs related to these businesses. Even more stunning, all this would occur by 2030, just 10 years after Ocasio-Cortez expects the legislation to be completed.

In its place, nearly all energy would be produced by renewable sources of power, especially wind and solar. This goal would create massive amounts of economic harm. Although economists have yet to provide an analysis of Ocasio-Cortez’s proposal to eliminate all fossil fuels, other studies have found less-extreme policies would be absolutely devastating. A study published in October 2018 by Capital Alpha Partners on behalf of the Institute for Energy Research found a national tax on carbon dioxide would cost the U.S. economy $4.21 trillion to $5.98 trillion, depending on the tax level chosen, in just the first 10 years of the tax scheme. By 2040, as much as $12.32 trillion would be lost. Nearly one-quarter of the country’s GDP, relative to what it would otherwise be, could be lost as a result of a nationwide carbon-dioxide tax. And this far left-wing plan is nowhere near as radical as Ocasio-Cortez’s Green New Deal.

Not only would Ocasio-Cortez’s plan destroy trillions of dollars in wealth, but it would also be virtually impossible to achieve. When the wind isn’t blowing and the sun isn’t shining, renewable electricity generation relies on fossil-fuel power to keep the lights on. Currently, the only way to have a 100 percent renewable-energy-powered electric grid would be for Americans to live without power when renewables aren’t producing enough energy. Among many other problems, that means there would be no stable electricity sources for hospitals and other essential services.

Ocasio-Cortez doesn’t merely want to destroy the existing energy industry, the plan also requires “upgrading every residential and industrial building for state-of-the-art energy efficiency, comfort and safety” and “eliminating greenhouse gas emissions from, repairing and improving transportation and other infrastructure, and upgrading water infrastructure.” Ocasio-Cortez’s draft resolution also proposes the elimination of “greenhouse gas emissions from the manufacturing, agricultural and other industries.”

Uhh.. ever heard of a battery?