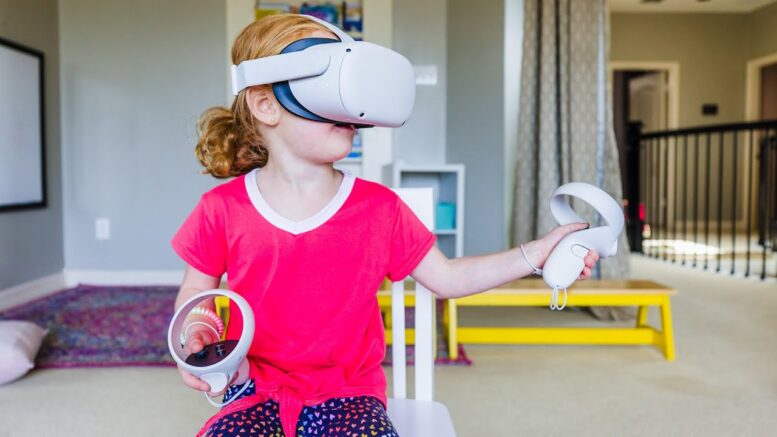 Please Share This Story!
PDF 📄
The future of the Metaverse is so big that Mark Zuckerberg changed the name of Facebook to Meta. Gaming and educational tech companies are racing to hook children as young as 3 years old into a virtual world that will literally re-write brain functions, warping reality and tricking them into experiences that cannot be distinguished from reality. Parents be warned! Keep your children out of virtual reality. ⁃ TN Editor

According to a recent poll, half of parents aren’t aware of how much screen time damages kids’ vision.  In fact, numerous studies have already determined that exposure to blue light from screens and LED light bulbs is biologically harmful (see 1, 2, 3, 4, 5, 6, 7, 8, 9, 10, 11).  Additionally, research has determined that exposure to electromagnetic radiation being emitted by screens (and other wireless tech) is especially harmful to kids as well (see 1, 2, 3, 4).

Other warnings about kids’ screen use (addiction, etc.) have been cited by various experts over the years as well.  American tech insiders (aka “Silicon Valley Parents”) seem to be aware of at least some of these issues otherwise they probably wouldn’t have been taking significant and sometimes extreme measures to limit their own kids’ use and exposure to screens and other tech for many years already (see 1, 2, 3, 4).  In the meantime, other parents as well as American school districts (see 1, 2, 3, 4) are encouraging kids to spend more time using screens including virtual reality (VR) headsets.

Warnings about VR use – especially by kids – aren’t new either.  Research has indicated that VR use can cause behavioral changes, balance problems (see 1, 2), cognitive problems, eye problems (soreness, vision changes), headaches and other discomforts, skin issues, as well as other short-term and/or long-term health issues.

Children also absorb 2-5 times more harmful radiation than adults while using VR systems.  Nevertheless, VR, AR (augmented reality), and mixed reality (MR) systems are increasingly being promoted for use by people of all ages for a variety of purposes.  None of that is included in an NBC News segment about kids not necessarily being safe in a virtual setting.  However, it is included that Meta does not recommend its products be used kids under the age of 13.

Inside the metaverse: Are your kids safe in a virtual world?

Virtual worlds are for the most part new and exciting but they are also largely unregulated. Millions of kids across the country and around the globe are becoming immersed in the metaverse, where they can be exposed to hateful, violent or sexual content. NBC News’ Kate Snow took a deep dive into the dangers that children may face when putting on these headsets.

Warning: The Metaverse Is A Grave Danger To Child Development – David Icke

[…] Read More: Warning: The Metaverse Is A Grave Danger To Child Development […]

“Are your kids safe in a virtual world?”

You don’t need to ask such silly questions. The answer with anything run by globalists has always been the same. Think Sesame Street was harmless, it was the desensitization for what’s going on now.

[…] Warning: The Metaverse Is A Grave Danger To Child Development […]