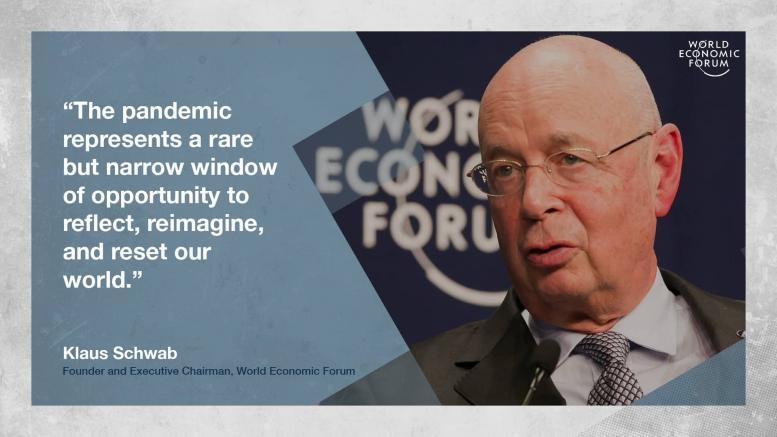 Please Share This Story!
PDF 📄
The WEF has always been out of the closet in relation to promoting Sustainable Development, aka Technocracy, but calling for a ‘Great Reset’ greatly bolsters my claim that Technocracy is executing its coup d’etat to take over the entire planet. ⁃ TN Editor

COVID-19 lockdowns may be gradually easing, but anxiety about the world’s social and economic prospects is only intensifying. There is good reason to worry: a sharp economic downturn has already begun, and we could be facing the worst depression since the 1930s. But, while this outcome is likely, it is not unavoidable.

To achieve a better outcome, the world must act jointly and swiftly to revamp all aspects of our societies and economies, from education to social contracts and working conditions. Every country, from the United States to China, must participate, and every industry, from oil and gas to tech, must be transformed. In short, we need a “Great Reset” of capitalism.

There are many reasons to pursue a Great Reset, but the most urgent is COVID-19. Having already led to hundreds of thousands of deaths, the pandemic represents one of the worst public-health crises in recent history. And, with casualties still mounting in many parts of the world, it is far from over.

This will have serious long-term consequences for economic growth, public debt, employment, and human wellbeing. According to the Financial Times, global government debt has already reached its highest level in peacetime. Moreover, unemployment is skyrocketing in many countries: in the US, for example, one in four workers have filed for unemployment since mid-March, with new weekly claims far above historic highs. The International Monetary Fund expects the world economy to shrink by 3% this year – a downgrade of 6.3 percentage points in just four months.

All of this will exacerbate the climate and social crises that were already underway. Some countries have already used the COVID-19 crisis as an excuse to weaken environmental protections and enforcement. And frustrations over social ills like rising inequality – US billionaires’ combined wealth has increased during the crisis – are intensifying.

Left unaddressed, these crises, together with COVID-19, will deepen and leave the world even less sustainable, less equal, and more fragile. Incremental measures and ad hoc fixes will not suffice to prevent this scenario. We must build entirely new foundations for our economic and social systems.

The level of cooperation and ambition this implies is unprecedented. But it is not some impossible dream. In fact, one silver lining of the pandemic is that it has shown how quickly we can make radical changes to our lifestyles. Almost instantly, the crisis forced businesses and individuals to abandon practices long claimed to be essential, from frequent air travel to working in an office.

Likewise, populations have overwhelmingly shown a willingness to make sacrifices for the sake of health-care and other essential workers and vulnerable populations, such as the elderly. And many companies have stepped up to support their workers, customers, and local communities, in a shift toward the kind of stakeholder capitalism to which they had previously paid lip service.

Clearly, the will to build a better society does exist. We must use it to secure the Great Reset that we so badly need. That will require stronger and more effective governments, though this does not imply an ideological push for bigger ones. And it will demand private-sector engagement every step of the way.

The Great Reset agenda would have three main components. The first would steer the market toward fairer outcomes. To this end, governments should improve coordination (for example, in tax, regulatory, and fiscal policy), upgrade trade arrangements, and create the conditions for a “stakeholder economy.” At a time of diminishing tax bases and soaring public debt, governments have a powerful incentive to pursue such action.

Moreover, governments should implement long-overdue reforms that promote more equitable outcomes. Depending on the country, these may include changes to wealth taxes, the withdrawal of fossil-fuel subsidies, and new rules governing intellectual property, trade, and competition.

The second component of a Great Reset agenda would ensure that investments advance shared goals, such as equality and sustainability. Here, the large-scale spending programs that many governments are implementing represent a major opportunity for progress. The European Commission, for one, has unveiled plans for a €750 billion ($826 billion) recovery fund. The US, China, and Japan also have ambitious economic-stimulus plans.

Rather than using these funds, as well as investments from private entities and pension funds, to fill cracks in the old system, we should use them to create a new one that is more resilient, equitable, and sustainable in the long run. This means, for example, building “green” urban infrastructure and creating incentives for industries to improve their track record on environmental, social, and governance (ESG) metrics.

The third and final priority of a Great Reset agenda is to harness the innovations of the Fourth Industrial Revolution to support the public good, especially by addressing health and social challenges. During the COVID-19 crisis, companies, universities, and others have joined forces to develop diagnostics, therapeutics, and possible vaccines; establish testing centers; create mechanisms for tracing infections; and deliver telemedicine. Imagine what could be possible if similar concerted efforts were made in every sector.

Hi Mr. Woods,
I subscribe to WEF on utube. Heard about this nefarious organization via John Haller during a May update. Watched the video called “THE RESET” this morning. They’re so excited, in a sinister way, about their agendas nearing the kick-off. I’m aware they’ve already been kicking it off & building up to it for many decades.
The wolves in shepherd’s clothing.
I’ve been following your work for several years! I respect your diligence, integrity, & faith immensely!
Woe to those that are lost.

Your sister in Christ,
Kim McClintock

Thank you, Kim. I appreciate the encouragement.

Epilogue/Alternate ending to the Lock Step scenario: {The Block Chain Traitors List option} But the rulers underestimated the people of the world and their use of the internet. The information that all this was a planned plague for world-wide totalitarian lockdown was distributed before they could get ahead of the narrative through censorship. In anger, instead of accepting vaccines and digital tattoos the people fought back as never before. They had enough of this nonsense. Some, from the international hackers group “Anonymous” started a block-chain-traitors-list (BCTL) that was inerasable as it was stored on virtually every computer. Prominent on the… Read more »

I much prefer this ending! What a world we could have if these cockroaches and their stinking “system” were destroyed!