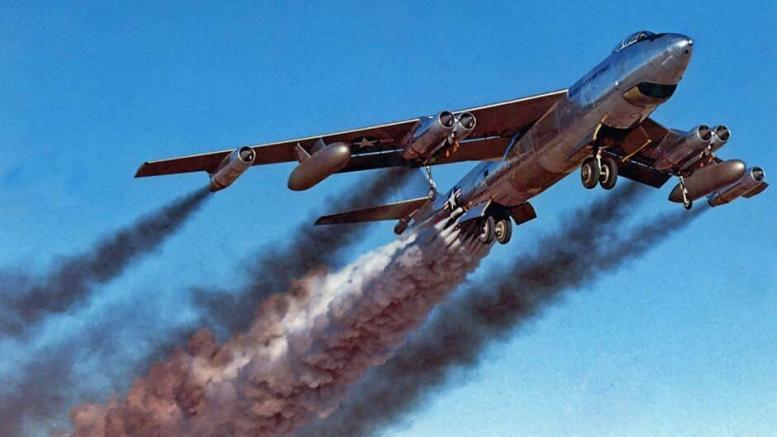 Please Share This Story!
PDF 📄
Although experimental geo-engineering has been ongoing for years, Bloomberg is now legitimizing it. Adding SO2 (Sulphur Dioxide) to the atmosphere would increase acid rain and add to deaths from cancers, strokes and heart disease. What could go wrong with that?

Ten years ago, the United Nations University published an article, The Frightening Politics of Geo-engineering and promoted the spraying of sulphur dioxide into the atmosphere. It noted the Royal Society’s definition of geo-engineering as:

“the deliberate large-scale manipulation of the planetary environment to counteract anthropogenic climate change” and divides methods into two types: carbon dioxide removal from the atmosphere, and solar radiation management aimed at reducing heat coming in or reflecting more of it out.

Since air is even more precious than water and food, all citizens of the world should insist that Technocrats keep their hands off the atmosphere, period. ⁃ TN Editor

Congratulations. You’ve done everything humanly ­possible to cut carbon dioxide—to zero. But what if even that won’t be enough?

It’s one of the most uncomfortable realizations in climate research. Inertia in the climate system implies that even if emissions stopped, temperatures and especially sea levels would continue to rise for a long time. The logical conclusion leads almost immediately to the specter of solar geoengineering, an attempt to use technology to reflect a portion of sunlight back into space. The principle behind solar geoengineering is simple enough. With less sunshine coming through the atmo­sphere, the planet would invariably cool—and fast. At least temporarily. There’s even a natural analogue: the eruption of Mount Pinatubo in the Philippines. In June 1992—ironically, the same time as the pivotal Rio de Janeiro Earth Summit—global average temperatures were about 0.5C cooler than they would have been without all the ash and sulfur dioxide, SO₂, catapulted into the lower stratosphere by the volcano a year prior.

Alas, the millions of tons of gunk from Mount Pinatubo soon fell out of the stratosphere, temperatures shot back up—and they’ve been increasing since.

That leads to another thought experiment. What if some entity, be it an international body or a lone ­nation, decided to use large-scale tech to re-create the cooling effects of a volcanic eruption? The engineering would be straightforward: release SO₂ near the equator about 20 kilometers (12.4 miles) up into the stratosphere. The SO₂ would turn into tiny reflective sulfate particles that would spread around the globe within weeks and linger for months. A bit of sunlight would be reflected away, and everything down below would be cooled.

This is the premise of solar geo­engineering via stratospheric aerosols. It’s fast. Unlike cutting CO₂, adding SO₂ cools the Earth within weeks, not decades. It’s powerful. Millions of tons of SO₂ could help offset the global warming effects of hundreds of billions of tons of CO₂. It’s also highly imperfect and risky. It’s akin to adding one type of pollution (SO₂) to help counter the effects of another pollutant (CO₂). Think of it as an experimental drug taken in a pandemic. It might show promise, but watch out for unknown side effects.

Do they realize the catastrophic results by disrupting ecosystems, weather patterns, winds and clouds formations? It would literally kill enormous number of flora and fauna as well all over the world. Then the fallout, it would contaminate the waters, food supply and wild animals food sources. Simply ludicrous that limited thinking man mind to attempt to temper with planetary system’s balance.

If they realize they don,t care. This is not about cooling the plant, Mo earth can take care of herself has for 5000 + years. This is about fear and control.

It is impossible to destroy what God has created

That is what we were put here to do, if you read the bible.

The best thing we could do for the flora is to return to the levels of carbon dioxide present 200 years ago, as it would eliminate the starvation of the planet’s plants and allow them to green the entire planet, which would easily sequester the larger amount of rain predicted by honest global warmers. The deserts would bloom as they do every time they get rain and end any possiblity of food shortages for us or the fauna.

If the “powers that be” continue to play god with their manipulation of our universe via their cloud seeding and other weaponry, someday they, too, will reap what they have sowed. If these people would read Revelations in the Bible, they may not be as willing to continue doing the things they are now doing or planning to do. However, they are not the kind of people who would read or believe in the Holy Bible. I have found it rather interesting to read articles about their suspected hiding places and wondered if it is true or not. For example:… Read more »

Agreed. UFOS maybe. Surveillance you betch ya. There are places for the elite to go. So hunker down arm up its going to be a ruff ride. you are on the right track

They don’t care! I believe you are on track with many of your points. There are Deep Underground Military Bases (DUMBS) all over the world. They are believed to have been used for human trafficking among other things. We have various ships. UFOs are certainly real. Don’t you find it odd that during a PLANdemic they would release Dclass docs on UFOs…prelude to what’s on the next page of their play book. These people are Satanist who just want to control the world whether it be here on Earth or from Space. And there is the other perspective that these… Read more »

The Bible says millions will disappear, and they are the ones that accepted Jesus as their Savior. The alien deception is thought to be an excuse to explain away the disappearance of millions of Christians. Can you imagine what chaos! Here is a great short audio story of the process, with 21 scenes: http://www.thecomingglobaltransformation.org/ . The Mary apparitions have a play in this too.

If UFOs didn’t exist, there would be no need to identify them.

A note about the book of Revelation. It is called ‘The Revelation of Jesus Christ to John”. It is best to read the whole Bible first before one can understand what is happening, better yet a born again person. Pray the Lord will reveal to you. These things cannot be understood apart from the Holy Spirit. For one the prophets of the Old Testament. In all the articles I am reading they are missing a huge part of what the Bible says is going to happen. #1) the forced treaty with Israel and the Palestinians. The man that forces this… Read more »

I don’t believe its in the experimental stage. Since covid started and the airline industry has tanked why are there so many planes in the sky. You can see them they look just like the ones above. Common people wake the up

The military never stopped flying and they are the biggest consumer of hydrocarbons on the planet. They don’t have to explain why they are spraying.

We know it as the prophesied THREE DAYS OF DARKNESS. The sun darkening plan will backfire on those who are launching this evil scheme. While it’s intended to usher in a New World Order, they will be finding themselves on the wrong side of history. May I suggest you read and prepare.
https://www.beautysoancient.com/three-days-of-darkness-nonsense-or-true-prophecy/

when did CO2 become pollution?
the articles are getting worse

We are all under the same sky this truly is an issue that effects everyone on the planet but people are focused on what is being forced feed via the media. Politics and social justice movements and other highly partisan ideology is pushed as the only point of focus. Image if everyone was aware of that we are being sprayed like pest.

i think one of the biggest factors is that humanity has cut down forests in large areas, for food fields, and in earlier history, as building material for ships, houses, forts etc as well for heating. that has lead to having less water in athmosphere as there is much less area that vaporizes water, and that way, things heat up.water circulation in grand scale has been already disrupted. plants suck water with roots, and vaporizes it with leafs/green stuff they have. if That is missing, then there is only place that can still vaporize it and thats soil itself, but,… Read more »

Well, NYC gets pretty hot in the summer. Let’s experiment over NYC ……… and when people start dying off, maybe they’ll rise up and get rid of Cuomo and stop his chemtrails at the same time. Two birds with one stone.

Since the majority of the chemtrails aren’t invisible sulphur dioxide, but nano-particulates of aluminum (or aluminium, as the Brits call it), barium, and strontium, is this just a distraction announcement?

I’m with the fifth dimension singing group on this song. Let the sun shine in. There’s seems to be a war on the sun and carbon dioxide. Too things that are essential for plant and animal life on earth. Give me my sunshine and my air. I just thought about that verse in the Book Of Revelation. It states that God would destroy those that destroy the earth. The sun will have it’s vengeance one day. There is a passage in Revelation that states that the sun was given power to scorch men with fire. I’m sure many people will… Read more »