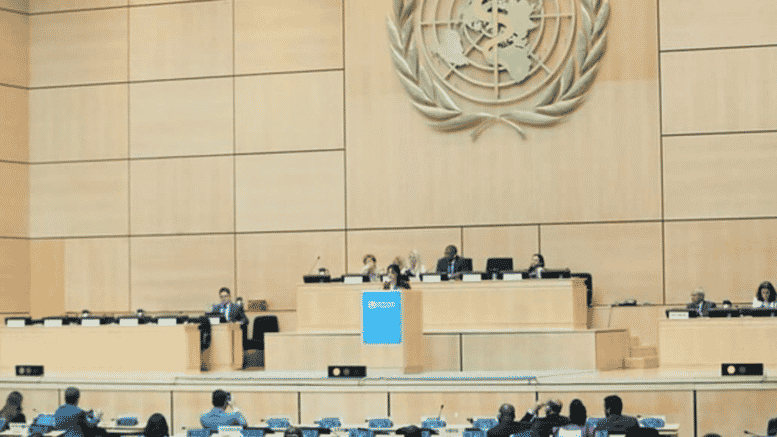 Please Share This Story!
PDF 📄
As Technocrats seek to take over the world, many national leaders are pushing back, notably those from the southern hemisphere. This highlights the total failure of Sustainable Development that promised to restore southern nations to economic prosperity. Instead, they got twice the plundering as before. ⁃ TN Editor

As most of you know, the World Health Assembly has spent the past 7 days considering Biden’s 13 controversial amendments to the International Health Regulations.

Official delegates from wealthy developed nations like Australia, the UK, and the US spoke in strong support of the amendments and urged other states to join them in signing away their countries’ sovereignty.

The first sign, however, that things might not be going the globalists’ way, came on Wednesday, the 25th of May, which just happened to also be Africa Day.

Botswana read a statement on behalf of its 47 AFRO members, saying they would be collectively withholding their support for the ‘reforms’, which many African members were very concerned about.

Multiple other countries also said they had reservations over the changes and would not be supporting them either.

These included Brazil, Russia, India, China, South Africa, Iran and Malaysia. Brazil in particular said it would exit WHO altogether, rather than allow its population to be made subject to the new amendments.

In the end, the WHO and its wealthy nation supporters were forced to back down.

They have not given up though – far from it. Instead, they did what they always do and ‘pivoted’.

At their request, a new working group was convened to make “technical recommendations on the proposed amendments” which will be re-submitted along with the Pandemic Treaty, at the 77th Health Assembly meeting in 2024.

There has also been lots of pushback from Republicans in the US, with a number of them introducing new bills giving the US Congress/Senate powers to override any WHO mandates or directives issued as part of any international agreements.

One, called the ‘No WHO Pandemic Preparedness Treaty Without Senate Approval Act’ has 15 co-sponsors and was introduced to the Senate on Thursday by Republican Senator Ron Johnson, who said “The sovereignty of the United States is not negotiable”.

We’ll, good news for a change! Sounds like Brazil has its priorities straight.

YES!!!!! Some good news. Apparently, the creepy global elitists believed they could hold the entire world hostage without a word uttered. THANK YOU TO ALL THE OTHER COUNTRIES FOR STANDING AGAINST THE BIDEN REGIME!!! The Biden regime and the sick Western countries signing on for this mishegas are just a bunch of fascists wannabes licking the boots of animals like Schwab and his sick mouthpieces who are stumping for their overlords and the orchestrated architecture of their sick worldview. Just yesterday information I know to be decidedly factual, because of the person delivering it was stated to me. The statement… Read more »

[…] WHO Forced Into Humiliating Backdown On Global Health Takeover […]

Some good news for a change.Might have known Australia would want it. Good on the rest of the world that can see through the BS.🙏🏻