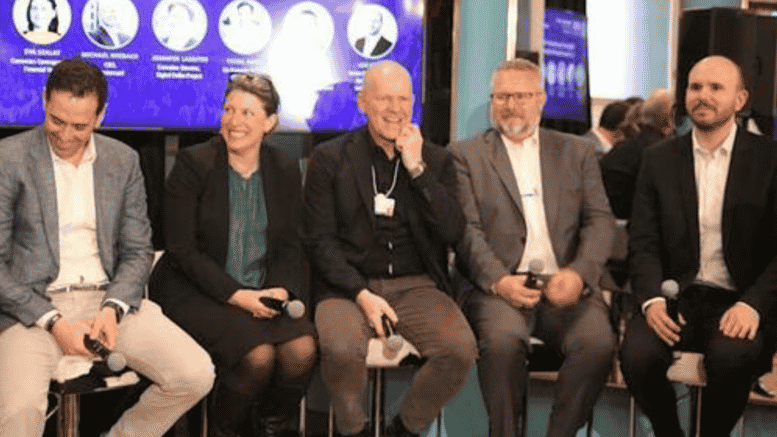 Please Share This Story!
PDF 📄
To make CBDCs like a stablecoin, the BIS will likely implement a global basket system like Special Drawing Rights, where all digital currencies are interchangeable. This is similar to John Maynard Keynes’ concept of Bancor, which allowed a one-way transfer of gold into Bancors but not the other way around. ⁃ TN Editor

There has been a long list of revelations coming out of the recent World Economic Forum meeting in Davos, but one issue that might have gone under the media radar involves comments by Mastercard CEO Michael Miebach during a discussion on the future of cross-border payments between nations.

Miebach, participating in a panel on Central Bank Digital Currencies at the WEF and hosted by the Global Blockchain Business Council, was one of the few participants that was willing to suggest that the SWIFT system, long dominated by western interests, might be made obsolete along with the proliferation of digital currencies among central banks.

Initially dismissed as “conspiracy theory” only a few years ago by the media, whispers of CBDCs have suddenly gone mainstream and blockchain technologies took center stage at Davos in 2022. The Federal Reserve has even started active public discussions assessing the case for retail digital currency products.

Few at Davos were willing to admit to the outcome that Mastercard’s CEO suggested, arguing that SWIFT would continue its prevalence for decades. Yet, almost every major central bank in the world is now pursuing a digital currency program, and the IMF has been exceedingly vocal about the need for a global digital currency system in the near future to provide “stability” in the face of national inflationary crisis events.

In the last year alone we have seen a developing trend among Eastern trade partners circumventing NATO sanctions in the wake of the war in Ukraine. After being blocked from accessing the SWIFT transfer network, which allows governments and central banks to quickly and accurately exchange data and transfer vast sums of capital, Russia and its allies are seeking alternative options. The Kremlin has talked often about using crypto and digital currencies to bypass restrictions, and China is currently establishing digital products to work around SWIFT and the CHIPS settlement system (Clearing House Interbank Payment System).

It would seem that western sanctions are only accelerating a global move away from dollar denominated structures, but of course, this may be exactly what global institutions like the WEF and IMF want. With a host of new CBDCs in play, price fluctuations may be just as erratic as they have been with Bitcoin and other cryptocurrencies. Meaning, buying power would be far too unpredictable for the average consumer. This sets the stage for groups like the IMF and WEF to “save the day” by instituting a global basket system, likely under the SDR (Special Drawing Rights) basket, in the name of homogenizing and stabilizing various CBDC markets into a single centralized entity.