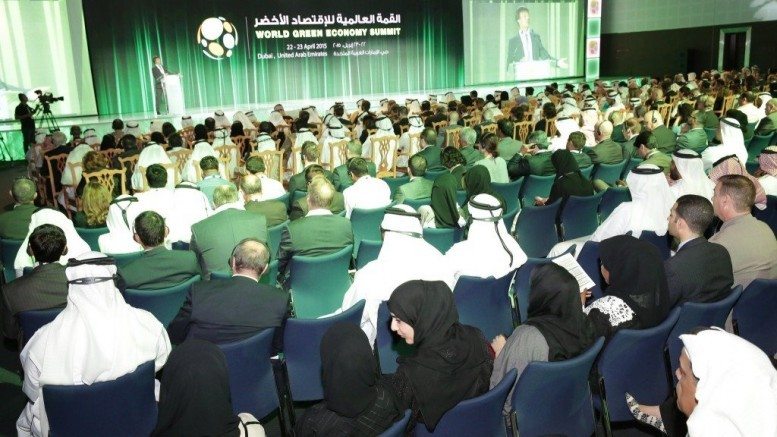 The very large Islamic connection to Green Economy is seen in this conference being held in Dubai for the second year in a row. Twelve percent of the Koran reportedly deals with ‘care of the earth’ issues (See Green Deen: What Islam Teaches About Protecting The Planet, Abdul-Matin) ⁃ TN Editor

Leading global experts in the field of green economy will collaborate on topics that are on top of the global agenda including renewable energy and green funding at the World Green Economy Summit (WGES) 2016, which opens tomorrow (October 5) in Dubai, UAE.

It is being held under the patronage of His Highness Sheikh Mohammed bin Rashid Al Maktoum, Vice President and Prime Minister of the UAE and Ruler of Dubai at Dubai International Convention and Exhibitions Centre.

A leading platform for sustainability and the green economy, the WGES 2016 Dubai is the third edition of the event.

The opening ceremony will present a comprehensive update on the implementation and achievements of the previous Dubai Declaration, pave the way for the implementation of the Paris Agreement and the 2030 Sustainable Development Agenda, and outline the expected contributions of WGES 2016, said the organisers.

Throughout the two-day event, delegates in the field of green economy will collaborate on topics that are on the top of the global agenda, including renewable energy, green funding, innovation, smart technology and cities.

The summit will also host a plenary session titled “The Road to COP22 in Marrakech: Bringing the Paris deal from agreement to action,” expected to establish the foundations for further progress in climate change mitigation to be made.

Saeed Mohammed Al Tayer, the vice chairman of the Dubai Supreme Council of Energy, managing director and chief executive of Dewa and chairman of WGES, pointed out that the UAE’s 2021 Vision stipulates six priorities areas, among which achieving sustainable development in parallel to economic and social development is key.

“The green economy forms a core pillar of this priority area, and requires collaboration between top decision-makers and experts in the public and private sector. To this end, the WGES, which aims to make Dubai the global capital of the green economy, has established itself as the leading platform for environmental and economic development, which falls directly in line with the UAE’s efforts to achieve this vision,” he stated.

According to him, such a progress in a two-year time frame is considerable, and has set the stage for even greater success via the WGES summits.

With this in mind, WGES 2016 aims to achieve strategic objectives that complement the key commitments contained in Dubai Declaration: to help promote Dubai’s position as a global capital of green economy and sustainable development; to raise the profile of key issues such as Clean Energy, The Green Fund and the development of a dedicated Green Business Zone; and to maintain WGES as the premier international platform for Green Economy, said Al Tayer.

With the guidance of its wide leadership, the UAE has already achieved many milestones in its mission to driving the global green economy – and through the WGES platform and other initiatives, it is clear that the path to make Dubai the capital of this economy is not only achievable, but within reach, he added.