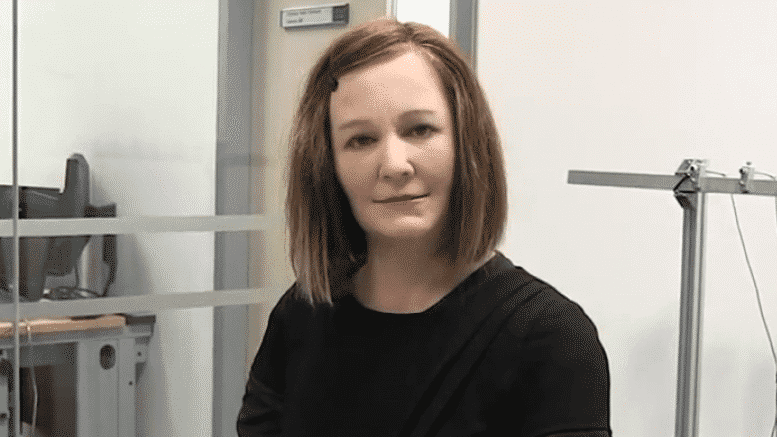 Nadine, the world most human-like robot

TN Note: Meet Nadine, the world’s most human-like robot, or so says its creator, Professor Nadia Thalmann at the Nanyang Technological University in Singapore. Nadine now works as a receptionist. Her creator says, “This is somewhat like a real companion that is always with you and conscious of what is happening.” The philosophy behind Technocracy would say that any job that could be done by a non-human, should be done by a non-human.

The world’s most human-like robot has begun work as a university receptionist as scientists predict the new technology will eventually provide childcare and offer friendship to lonely elderly people.

With her soft skin and flowing brunette hair, Nadine does not only meet and greet visitors, smile, make eye contact and shake hands, but she can even recognise past guests and spark up conversation based on previous chats.

Unlike conventional robots, Nadine has her own personality, mood and emotions. She can be happy or sad, depending on the topic.

Powered by intelligent software similar to Apple’s Siri orMicrosoft’s Cortana, she is the brainchild of scientists at the Nanyang Technological University in Singapore and is based on her creator Prof Nadia Thalmann.

Prof Thalmann, the director of the Institute for Media Innovation who led the development of said robots such as Nadine are poised to become more visible in offices and homes in future.

“Robotics technologies have advanced significantly over the past few decades and are already being used in manufacturing and logistics,” she said.

“As countries worldwide face challenges of an aging population, social robots can be one solution to address the shrinking workforce, become personal companions for children and the elderly at home, and even serve as a platform for healthcare services in future.

“Over the past four years, our team at NTU have been fostering cross-disciplinary research in social robotics technologies — involving engineering, computer science, linguistics, psychology and other fields — to transform a virtual human, from within a computer, into a physical being that is able to observe and interact with other humans.

“This is somewhat like a real companion that is always with you and conscious of what is happening. So in future, these socially intelligent robots could be like C-3PO, the iconic golden droid from Star Wars, with knowledge of language and etiquette.”

The least she could have done is make “it” good looking !!

yup, “it” is one ugly machine.