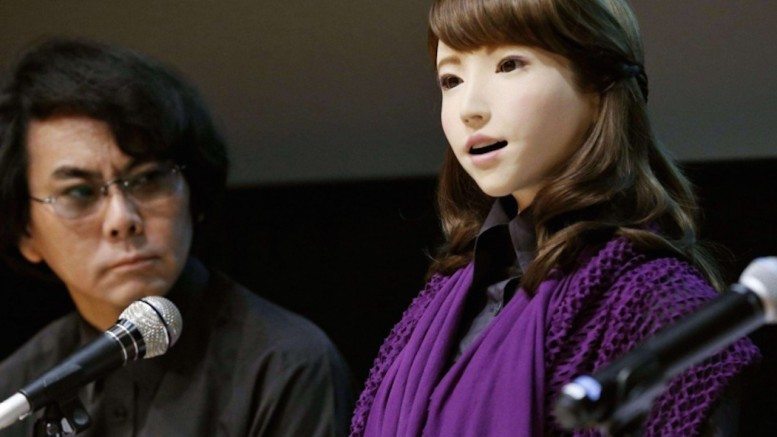 TN Note: We had the ‘space race’ and the ‘arms race’ and now we have the “robot race”. Nations and companies are rushing to create the perfect android that can replace people in work-related positions. Technocracy is generally and specifically amoral, and technology is created because it can be created. The societal implications are of little or no concern to Technocrats.

Erica enjoys the theatre and animated films, would like to visit south-east Asia, and believes her ideal partner is a man with whom she can chat easily.

She is less forthcoming, however, when asked her age. “That’s a slightly rude question … I’d rather not say,” comes the answer. As her embarrassed questioner shifts sideways and struggles to put the conversation on a friendlier footing, Erica turns her head, her eyes following his every move.

It is all rather disconcerting, but if Japan’s new generation of intelligent robots are ever going to rival humans as conversation partners, perhaps that is as it should be.

Erica, who, it turns out, is 23, is the most advanced humanoid to have come out of a collaborative effort between Osaka and Kyoto universities, and the Advanced Telecommunications Research Institute International (ATR).

At its heart is the group’s leader, Hiroshi Ishiguro, a professor at Osaka University’s Intelligent Robotics Laboratory, perhaps best known for creating Geminoid HI-1, an android in his likeness, right down to his trademark black leather jacket and a Beatles mop-top made with his own hair.

Erica, however, looks and sounds far more realistic than Ishiguro’s silicone doppelganger, or his previous human-like robot, Geminoid F. Though she is unable to walk independently, she possesses improved speech and an ability to understand and respond to questions, her every utterance accompanied by uncannily humanlike changes in her facial expression.

Erica, Ishiguro insists, is the “most beautiful and intelligent” android in the world. “The principle of beauty is captured in the average face, so I used images of 30 beautiful women, mixed up their features and used the average for each to design the nose, eyes, and so on,” he says, pacing up and down his office at ATR’s robotics laboratory. “That means she should appeal to everyone.”

even more uglier than nadine!

oops, I should say either “more ugly” or “uglier” NOT “more uglier”, for proper English. An android would NEVER have made that grammatical error.

An android wouldn’t correct itself either. Or laugh at itself or others

But, can the android reason by itself and make comparisons just as you have done to be able to judge all things according to standards of what is correct and based on what we believe is good and true?

Manipulation of genetics is one reason why Atlantis was destroyed. This may not be genetics, but it is still a manipulation of humans. This is not the process that goes with a real person.
Nita