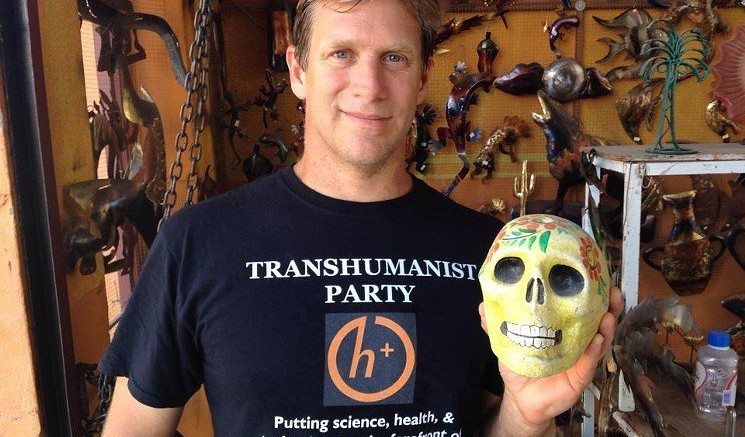 TN Note: Technocrat/Transhumanist Zoltan Istvan is dead serious (pun intended) about immortality. He is running for U.S. President as a representative of the Transhumanist Party, while spreading the gospel of Transhumanism. His writings and ideas have been featured in The Huffington Post, Le Monde, Wired, Esquire, Mashable, The Telegraph (UK), Financial Times, Newsweek, Gizmodo and a host of others.

That’s the firm belief of Zoltan Istvan, a third-party presidential candidate who wants to not only beat Trump at the polls, but also cheat death itself.

‘I’m hoping I will live indefinitely, that’s a major priority,’ the 42-year-old tells DailyMail.com. ‘Even if don’t, I would freeze myself or use some other type of mechanism.’

Istvan says one possibility is uploading parts of his personality to a machine so that future generations can reconstruct a realistic avatar that recreates his being.

‘What happens is you take a complete scan of the brain with incredible detail using technology that is already available to some extent,’ he said.

‘Then in 20 or 30 years when the technology arrives, we upload these detailed scans to a machine, which reconfigures the brain circuitry using sophisticated algorithms.’

If all goes well, it may be possible to have an uploaded consciousness that exactly resembles someone’s personality.

From this point, he says, people could transform themselves as an avatar and live in virtual reality.

By then, robotics would be so advanced that you wouldn’t necessarily be able to tell the difference between who is a real human and who is a machine.

This promise is at the heart of Istvan’s presidential campaign, which he is running for the Transhumanist Party.

The movement describes a belief that technology has the power to achieve immortality and physical perfection.

Transhumanists believe we can do this through technologies such as mind uploading, cyborg body augmentation, and genetic manipulation.

Unlike other gene-silencing tools, the Crispr system targets the genome’s source material and permanently turns off genes at the DNA level.

It has the potential to treat several thousand inherited disorders such as Huntington’s disease and cystic fibrosis.