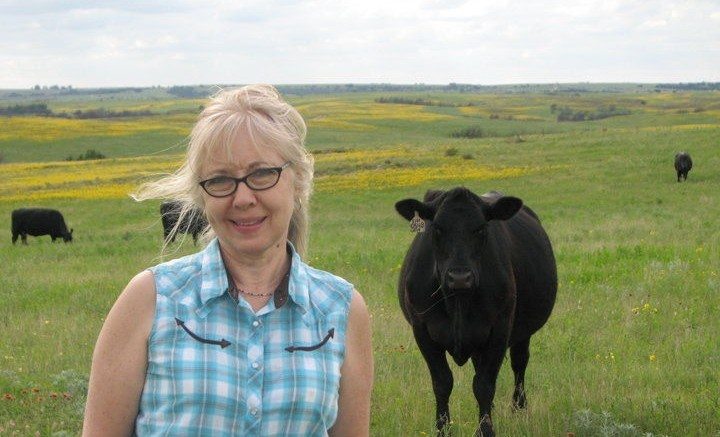 TN Note: How do you know when enough is enough? Each person has their own point of inflection that when reached will move them to tangible action.  In recent years, more and more people are turning to activism as the only way to push back against tyranny.

As her children and grandchildren filter through the office at the Chain Land and Cattle Company on this bright spring morning, Andrea (Andy) Hutchison looks more like the proud mother and grandmother she is than the agricultural activist she has become. Some of the kids come to see what their job is for the day and others are looking for the home-baked goodies sitting next to the coffee pot on the shelf.

Hutchison and her husband, Brad, have four children and 10 grand children. All of her kids are involved in some way in the family ranching business west of Canton, Okla. Hutchison said her great-grandfather, Oscar Chain, homesteaded on the land 120 years ago trading a shotgun and $50 for a quarter section of land in Dewey County in 1893. Her son lives on that place and underneath his home is the original dugout where her great-grandfather lived. Hutchison herself lives in the home her grandfather Lenard Chain built.

Hutchison’s transformation from housewife and mother to agricultural activist began with involvement in the Oklahoma Cattlewomen, Inc. She eventually served two terms as president of this group.

“At that time I was just raising kids, cooking, being a gofer for the ranch hands, and helping the secretary in the office,” Hutchison said.

In 2006 she was appointed to her first of two terms on the Cattlemen’s Beef Board.

“I really started watching and learning to see what was going on,” Hutchison said.

Today she is chairman of the Animal Well-Being Committee for the American National Cattlewomen and represents that group on the board of the Animal Ag Alliance.

Her involvement in these organizations opened Hutchison up to the issues facing agriculture across the country.

“I started hearing stories 10 years ago at these meetings,” Hutchison said. “There were little groups of women discussing these problems. They would come in and tell horror stories but nobody was listening to them.”

Through these meetings Hutchison met women like Sue Krentz and Mindy Patterson and most recently Janet Hufnagel Thompson. Sue Krentz and her husband, Bob, were fighting immigration issues on their ranch in Arizona. Bob Krentz was killed by illegal aliens crossing their ranch to enter the U.S. Mindy Patterson has been fighting against the Humane Society of the U.S. in Missouri in an effort to re-establish the humane slaughter of horses. Janet Hufnagel Thompson and her husband fought back against environmentalists but eventually lost their feedlot business in Australia.

“I would come back home and tell these stories back here in Oklahoma and most thought I was nuts,” Hutchison said. “The stories I hear are coming directly from the people it is happening to with conversations ranging from drones and the abuse of the EPA to threats of Endangered Species destroying livelihoods .”

Hutchison said women are more likely to get together and talk about these problems than men. In the past there were Home Demonstration Units or sewing clubs that gave rural women an opportunity to gather and discuss issues in their lives. Today these same women are more likely to be officers in state, regional, and national farm and rancher-related organizations.

After hearing all of these stories, Andrea Hutchison believed that these were not just random events. Somehow they were all tied together.

“It was a culmination of a lot of stories,” Hutchison said. “I knew there was something wrong, early on I thought it was just HSUS. But over the last year I’ve realized it was something else.”

Hutchison believes that the something else is Agenda 21. Wikipedia describes Agenda 21 “as a non-binding voluntarily implemented action plan of the United Nations with regard to sustainable development.” It is a product of the United Nations Conference on Environment and Development held in Rio de Janeiro, Brazil in 1992. Agenda 21 is implemented at local, national, and global levels by multilateral organizations and individual governments.

“It is like someone threw a bunch of knives in the air and now they are falling and we are in the middle of it,” Hutchison said.

Hutchison has been speaking to groups at the local and national levels to educate other producers on how to recognize Agenda 21 and its infiltration. Nationally she was part of panel discussion at a meeting of the American Agri-Women. She will speak to anyone who will listen.

“It is a lot of information to share with a farmer or rancher,” Hutchison said. “After 10 or 15 minutes their eyes begin to glaze over.”

One of Hutchison’s main concerns about Agenda 21 is the fact that this plan will ultimately be determining what is and what is not sustainable, a term that actually has no objective way to be measured. Basically, there will be no top on the regulations that could be implemented. It will affect not only farmers and ranchers but all owners of private property.

Hutchison is not alone in her campaign to stop Agenda 21. In March this year a large group of Oklahoma residents, who are concerned about this UN-sponsored program, met at the capital building in Oklahoma City to educate their legislators about the issue.

From the beginning Hutchison said she felt like she was doing the right thing and never stopped talking about the issues that were important to her and other cattlewomen. She encourages everyone to do their own research and find out just who they are letting on their farms and ranches.

As the grandkids leave the office at Chain Land and Cattle Company they congregate in their grandmother’s backyard, gathering material to build a fort. Andrea Hutchison the activist is now the proud grandmother again as she looks at them play together. She says they are the real reason she is involved with these issues. Hutchison wants those grandkids to have an opportunity to be in the ranching business that has been so good to her family.

There is no such animal as “sustainable”. Everything in the universe is subject to change, decay and redundancy. I am reminded of the tale of the fellow who had a house in Rotorua New Zealand when a couple of steam fumaroles appeared in his lawn. So he decided to pour concrete down them till they were blocked and was most put out when a much more powerful fumarole suddenly appeared under his house and blew it away.