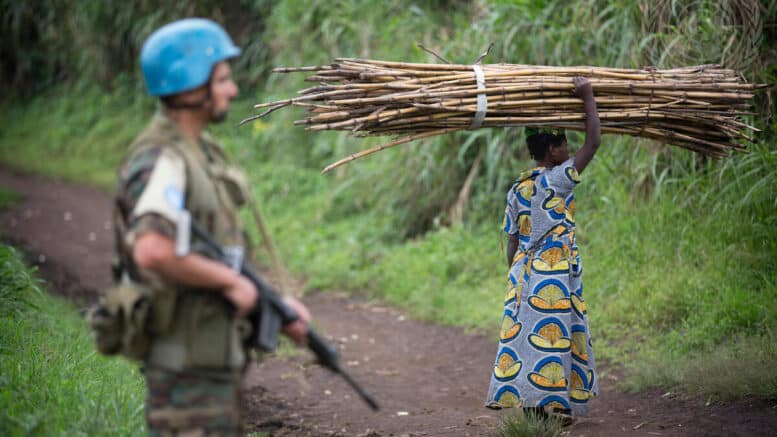 A UN peacekeeper on patrol as a resident gathers wood in the Beni region of eastern DRC in 2014. UN Photo/Sylvain Liechti

Posted By: Kristin Wagner via The Conversation August 19, 2022

Please Share This Story!
PDF 📄
The UN’ 17 Sustainable Development Goals promise no poverty, zero hunger, good health and well being, quality education, gender equality and sustainable communities. In reality, UN “peacekeepers” do the polar opposite, raping women and children, promoting poverty and creating permanent inequality. This is the same UN that wants to run the world and dictate your health. ⁃ TN Editor

My father left my mother while she was pregnant – she gave birth when he had already left. People call me “daughter of a bitch”. They disturb and hurt me so much. They say they will chase me because I am a foreigner. I am suffering.

These are the words of Emma* – a 13-year-old girl from Beni, a city in the east of the Democratic Republic of the Congo (DRC) near its border with Uganda. Emma’s mother Grace* was still in school when she met and became involved with a Uruguayan soldier working in DRC as a United Nations peacekeeper. When Grace got pregnant, ‘Javier’ promised his support and told her not to worry. Grace was under the impression they would get married and start a family.

Yet only a few weeks later, Javier returned to Uruguay and was never heard from again. Unable to cover the costs of pregnancy and childbirth, Grace was deeply affected by his leaving. To provide Emma with food, clothes and shelter, she was compelled to exchange sex with peacekeepers from the nearby UN base for small amounts of money or items like bread, milk and soap. She has yet to receive any support from the father or his military, and is unable to meet her daughter’s longer-term needs including her education.

In spite of the pain her abandonment has caused, Emma says she wants nothing more than for her father to return and improve her circumstances:

I feel hurt when I see UN agents passing by because other children have their fathers, but I don’t have mine. I would like to tell my father to think about me, wherever he is. He should know that I don’t have a family. If my mother dies, who will raise me?

Emma’s story is far from unique – both according to our research and the UN’s own internal reports. However, this is the first time that children of UN peacekeepers have spoken directly about the impact of abandonment on their lives and families.

Their stories corroborate our previous interviews with the mothers of peacekeeper children in Haiti. In both countries, UN personnel left impregnated women and young girls to raise children in deplorable conditions, with most receiving no financial assistance.

Our findings in DRC are based on 2,858 interviews with Congolese community members, including 60 in-depth interviews with victims of sexual misconduct who conceived children with peacekeepers, and 35 interviews with children who were born as a result. The research, which dates back to 2018, implicates UN personnel from 12 countries, the majority of whom were Tanzanian and South African. Mothers said these absent fathers held roles ranging from soldiers, officers and pilots to drivers, cooks, doctors and photographers.

According to our research, the youngest girl to have been impregnated by a UN peacekeeper was just ten  years old. One in every two mothers were under the age of 18 when they conceived. In this interview, a 16-year-old mother recalls being trafficked by her family, and impregnated, at the age of ten:

I was very young – just ten years old. I realised later on that I was sold out by my aunt. The men were buying beer in the pub to share it with me. When I was drunk, they profited from unwanted sexual acts. Every morning my aunt gave me milk, bread, food and water to recover from all the lost energy. (Mother, 16)

‘Rape capital of the world’

Fuelled by extremely high levels of poverty, displacement and a lack of effective judicial systems, DRC has the highest number of allegations of UN peacekeeper-perpetrated sexual exploitation and abuse of any country in the world (about a third of all such allegations since the turn of the century). Yet no systematic research on paternity claims linked to Monusco (the current UN mission in DRC, which took over from the previous mission in 2010) has existed until now.

DRC is the epitome of a war-torn country with a thriving peacekeeping sex economy. Years of colonialism, oppression by national and international regimes, power struggles and corruption have left indelible scars. Security remains highly volatile due to fighting between more than 130 armed groups. In recent weeks, there have been a number of violent protests against UN peacekeeping forces in eastern DRC, with protesters calling for the UN to withdraw from the area. In one such incident, ten people are reported to have been killed. It is against this backdrop that US Secretary of State Antony Blinken is visiting.

Sexual violence has become a defining feature of this conflicted region. Descriptions that dub DRC the “rape capital of the world” and “the worst place in the world to be a woman” reflect how the conflict-related violence has normalised rape and sexual exploitation by civilian perpetrators, humanitarian workers and UN peacekeepers.

Our interviews reveal that the majority of women and girls in DRC who had sexual relations with peacekeepers – whether willingly or forced – were living in extreme poverty. We heard a number of accounts of girls and women having been raped by one or more peacekeepers, sometimes while begging for humanitarian assistance. One participant who said she had been gang-raped by UN peacekeeper personnel at the age of 13 described heavy stigmatisation for not being able to identify her child’s father:

People started wondering where this little girl got her pregnancy from. They laughed so much at me. They said, “Look at her who has been raped, she has a white child.” Many people laughed at me. I felt so insulted, all of this hurt me so much. (Mother, 25)

While peacekeeping missions are credited with a crucial role in protecting human rights in conflict, the risk of peacekeepers exploiting or abusing those most in need of protection calls the legitimacy and morality of deploying missions into question.

Sadly women are easily fooled into having unprotected sex with people they have no financial history or idea about their integrity and it is just not with U.N. Peacekeepers. This is a worldwide problem, such as with U.S. GIs in Korea, Germany and other stations. In women’s quest to obtain financial security they take the huge life changing risks of having unprotected sex, getting pregnant and it often comes back to have huge negative consequences. Half the men can hardly take care of themselves due to world wide low wages so they run for the hills trying to escape this… Read more »

Sorry to say this is NOT surprising. In fact, nothing today is surprising.