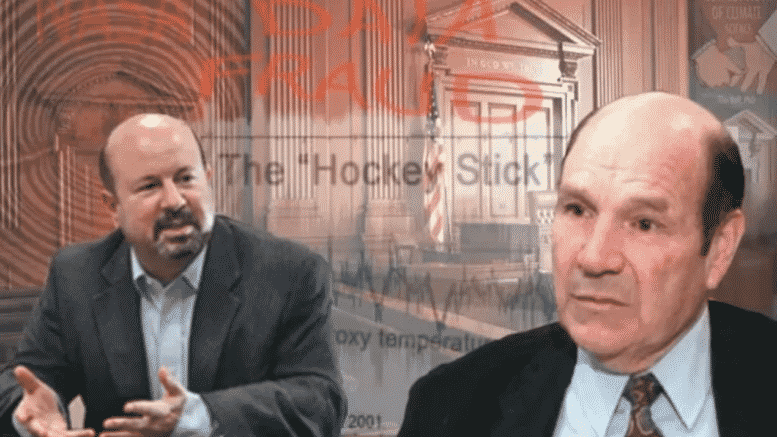 Please Share This Story!
PDF 📄
Michael Mann is the discredited climate scientist who fabricated the infamous “hockey stick” model of global warming. His answer to critics like Dr. Tim Ball is to sue them. Now he wants all dissenters forcibly censored and removed from public discussion. This is how the “science is settled” by pseudo-science ideologues.

Climate alarmists like Mann cannot stand up to the traditional rigor of scientific debate, so their only defense is to simply shut critics out of the discussion. This is why Mann repeatedly attacked Dr. Tim Ball, an eminent climate scientist in Canada. Mann lost his defamation lawsuit against Ball in the BC Supreme Court in 2019. ⁃ TN Editor

Denials of “climate change” are “deadlier” than denials of the science behind COVID-19, according to renowned climate activist Michael E. Mann, who defended his earlier call for social media companies to censor those who disagree with his views on global warming science, effectively removing “climate denial” content in the same way “COVID denial” content is suppressed online.

On Monday’s episode of the left-wing Democracy Now! news and commentary program, climate activist Michael Mann, director of the Earth System Science Center at Pennsylvania State University, told host Amy Goodman that climate change is deadlier than the coronavirus after being asked to explain his demands that YouTube remove climate-denial content:

Here we saw nearly a hundred people die from these unprecedented tornadoes [and] if you look at the total impact of climate change around the world — wildfires, droughts, floods, heat waves, coastal inundation — climate change is already costing far more lives than COVID-19; it is deadlier.”

According to Mann, the reason for censorship by Big Tech and social media companies of “COVID denial” in contrast with the perpetuation of “climate denial” content is due to powerful companies with a financial “stake” in the issue.

“Here’s the difference: there isn’t a huge global lobby, the world’s… wealthiest and most powerful industry, the fossil fuel industry, that has a stake in the COVID-19 debate,” he argued.

Noting there “isn’t a huge corporate interest that’s going to get in their way” on the subject of “COVID denial,” Mann claimed that regarding climate change, “it’s a whole different story.”

“We are talking about an effort by the world’s largest, most powerful industry — the fossil fuel industry — to prevent any meaningful action on climate, and to accomplish that in part by using social media to promote denialism and dismissal,” he said.

Mann went on to accuse social media companies of complicity in the matter.

“You know why are they being complicit?” he asked. “Well, many of them are getting a lot of advertising money from the fossil fuel industry, so it’s inconvenient to their business model to challenge that industry.”

“And I am afraid that that’s what we’re seeing here,” he added. “And we have to take them to task, because they are doing great harm; they’re making profits by doing great harm to all of us.”

“…we saw nearly a hundred people die from these unprecedented tornadoes [and] if you look at the total impact of climate change around the world…” 100 – deaths due to unsupported climate change data made up by Mr. Mann 1,000,000+ – injured, dead and continuing to die, a result of covid profiteers/liars mandating kill shots to everyone, even children. Mr. Hockey Stick (HS) and his Penn State profiteering buddies are KNOWN for their works against humanity and support of the current covid criminal cartel who couldn’t sell their climate change bull. Take a look at the patents, people and payments.… Read more »

Wouldn’t it be easier and cheaper to censoe Me Mann?

He’s on the criminal cartel’s payroll and has been for a very long time.

Here’s the corrected comment since edit does not seem to work.

Wouldn’t it be easier and cheaper to censor MerMann?

………and Goldman Sachs demand prison for those people who wont recognize how a brilliant a fraud the CO2 is.
………and he Pope demanded jail for people who claimed the world was a futball. The world will never learn until some horned guy is kicked out from this planet

What about HAARP, Chemtrails and weather weapons. Seems to me they are using them and have been for years!

Rhetorical question: Why is it that people who can’t support their arguments always want to censor those who can? Global Warming Activist Michael ‘Hockey Stick’ Mann Demands Censorship Of Dissenters – David Icke

[…] Read more: Rhetorical question: Why is it that people who can’t support their arguments always want to ce… […]

Instead of debating fellow climate scientists who are opposed to man made climate change Michael mann hits then with SLAPP law suits in order to silence them.

Didn’t work with Ball. That came back on him.