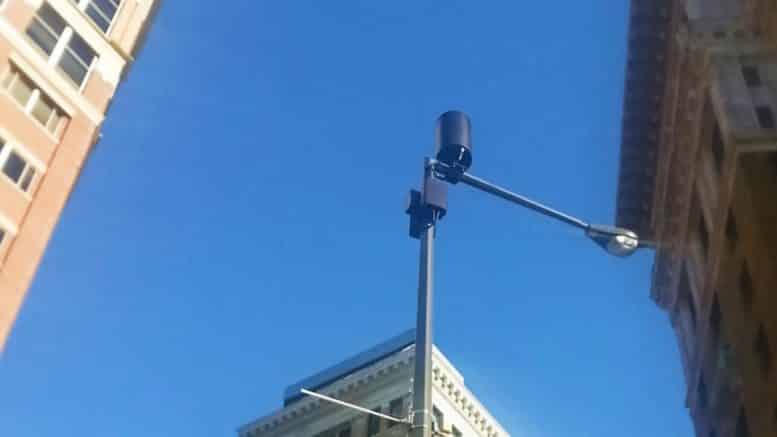 Please Share This Story!
PDF 📄
5G will enable and actualize the Internet of Things to be completely ubiquitous, but it portends huge health risks as EMF radiation blankets cities. Technocrats are not interested in testing this technology first to determine effects on human health, even though there are already known health problems. ⁃ TN Editor

5G is the term used to describe the next-generation of mobile networks beyond the 4G LTE mobile networks commonly used today. 5G is intended to be the technology that allows the Internet of Things (IOT)  to exist and tie all internet connected devices together.Currently there is no standard for 5G networks in place and it will be a combination of a variety of frequencies and modulations. Industry is developing exactly what 5G will be as the standard ha not been set yet. It is assumed that 5G networks will not become commercially available until 2020 but several cities are rolling out 5G as test areas now.

Published peer reviewed science already indicates that the current wireless technologies of 2G, 3G and 4G – in use today with our cell phones, computers and wearable tech – creates radiofrequency exposures which poses a serious health risk to humans, animals and the environment. Scientists are cautioning that before rolling out 5G, research on human health effects urgently needs to be done first to ensure the public and environment are protected.

However, instead of prudent public health measures to ensure the public’s safety, governments such as the United States are quickly rolling out 5G networks in neighborhoods and are enacting various state and federal regulations to “streamline” and fasttrack the rollout. These regulations will end the ability of communities to halt and be a part of the decision making process in this massive 5G infrastructure buildout.

5G will require the buildout of literally hundreds of thousands of new wireless antennas in neighborhoods, cities and towns. A cellular small cell or other transmitter will be placed every two to ten homes according to estimates. The purpose of this massive infrastructure build out of small cells, distributed antennae systems and microcells is to increase range and capacity in populated urban areas and prepare for the future 5G rollout. 5G frequencies will utilize higher frequencies that do not travel as far as the lower frequencies.

US state and federal governments are moving forth regulations which would make the right of way in front of homes as available sites for 5G transmitters – without consent of the property owners. In response, communities are protesting en mass as they do not want these transmitters built in front of their homes and communities want to be able to regulate the placement on right of ways.  Some municipalities are taking the case to the courts with litigation.

5G WILL USE HIGHER ELECTROMAGNETIC FREQUENCIES

5G will utilize multiple frequencies from those currently in use for cell phones and wireless to higher millimeter frequencies.

Today’s cellular and Wi-Fi networks rely on microwaves – a type of electromagnetic radiation utilizing frequencies up to 6 gigahertz (GHz) in order to wirelessly transmit voice or data. However, 5G applications will require unlocking of new spectrum bands in higher frequency ranges above 6 GHz to 100 GHz and beyond, utilizing submillimeter and millimeter waves – to allow ultra-high rates of data to be transmitted in the same amount of time as compared with previous deployments of microwave radiation.

Current investigations of wireless frequencies in the millimeter and submillimeter range confirm that these waves interact directly with human skin, specifically the sweat glands. Dr. Ben-Ishai of the Department of Physics, Hebrew University, Israel recently detailed how human sweat ducts act like an array of helical antennas when exposed to these wavelengths.

MECHANISM OF ACTION IS PROVEN

Research already indicates serious adverse effects from the wireless modalities in use today. Research studies from the Dielectric Spectroscopy Laboratory of the Department of Applied Physics, Hebrew University of Jerusalem, headed by Dr. Yuri Feldman, indicate that 5Gs millimeter and submillimeter waves will uniquely interact with human skin and  lead to preferential layer absorption. The number of sweat ducts within human skin varies from two million to four million.  Replicated peer research of these biological effects in laboratory research has been conducted internationally  and scientists consider this mechanism of action well proven (See documentation further down on this webpage).

5G FREQUENCIES ARE USED IN WEAPONS

For years, the U.S., Russian and Chinese defense agencies have been developing weapons that rely on the capability of this electromagnetic frequency range to induce unpleasant burning sensations on the skin as a form of crowd control. Millimeter waves are utilized by the U.S. Army in crowd dispersal guns called Active Denial Systems. Dr. Paul Ben-Ishai pointed to research that was commissioned by the U.S. Army to find out why people ran away when the beam touched them. “If you are unlucky enough to be standing there when it hits you, you will feel like your body is on fire.” The U.S. Department of Defense explains how “The sensation dissipates when the target moves out of the beam. The sensation is intense enough to cause a nearly instantaneous reflex action of the target to flee the beam.”

HUMAN SKIN WILL BE CLASSIFIED AS AN EXTREMITY ALLOWING HIGHER EXPOSURES

Our skin is our largest organ. Dariusz Leszczynski, PhD, Chief Editor of Radiation and Health has  stated that  the International Commission on Non-Ionizing Radiation Protection usually referred to as ICNIRP – is  developing recommendations for public exposure limits of these higher frequencies is planning to classify all the skin in the human body as belonging to the limbs rather than to the head or torso. Leszczynski cautioned that, “If you classify skin as limbs – no matter where the skin is – you are permitted to expose it more than otherwise.”

We assume that in terms of US exposure limits this means that the skin will be classified as “an extremity”. Extremities are allowed to be exposed to much higher radiation levels than the brain, torso, legs and arms. In the USA extremities -in regards to wireless radiation- are specifically wrists and hands, ankles and feet and the ear.

5G is being developed and implemented without adequate evaluation of the effect of this technology on human health after long term exposure to these frequencies. Peer reviewed research studies have found adverse effects from the electromagnetic  frequencies currently in use and that will be in use for this new technology.

“There is an urgent need to evaluate 5G health effects now before millions are exposed. We need to know if 5G increases the risk of skin diseases such as melanoma or other skin cancers,” stated Ron Melnick, the National Institutes of Health scientist, now retired, who led the design of the National Toxicology Program study on cell phone radio frequency radiation.

Here’s a great research consortium that’s put together a report detailing the 100s of adverse health effects from current EMF exposure. From cancer to depression and more.

So libertarians are proved correct again.