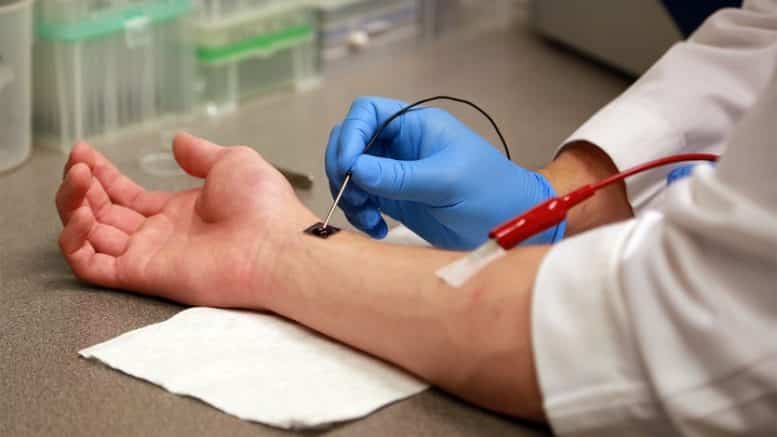 Please Share This Story!
PDF 📄
There is still a science fiction aspect to this technology because all claims are not yet proven, but it could be a breakthrough discovery. There are also Transhuman implications as well, in finding ways to overcome aging and even death. ⁃ TN Editor

Scientists have hailed a “breakthrough” technology capable of regrowing damaged organs and healing serious wounds with the single touch of a penny-sized pad.

The new device uses nanochips to reprogramme skin cells which then generate any type of cell necessary for medical treatment.

The non-invasive procedure takes less than a second and in laboratory trials was found to restore the function of badly damaged blood vessels within days.

Dubbed tissue nanotransfection (TNT), the technique works by placing a small pad of nanochips over a damaged area.

A small electric current then fires DNA into the skin cells, converting them into the specific building block cells of any other part of the body, such as arteries, or even organs like the heart.

It promises to transform the chances of patients in need of complex reconstructive  surgery, as well as those whose organs are prematurely ageing.

The US researchers who created the technology say it could even be used as a weapon against neurological diseases like Alzheimer’s and Parkinson’s.

They believe it will be possible to reprogramme skin cells to harvest brain cells in a peripheral part of the body, such as the arm, which can then be injected into the brain.

The team at Ohio State University have successfully trialled TNT on pigs and mice, with a reported success rate of 98 per cent.

In one experiment, blood flow in the severely injured leg of a mouse was restored in less than a week after the pad reprogrammed skin cells to create vascular cells.

After two weeks, the leg was substantially healed.

Researchers plan to start clinical trials on humans next year.

“With this technology, we can convert skin cells into elements of any organ with just one touch,” said Dr. Chandan Sen, who led the study.

“This process only takes less than a second and is non-invasive, and then you’re off.

“The chip does not stay with you, and the reprogramming of the cell starts.

Unlike stem cell therapies, TNT would require no laboratory-based procedures ahead of use, meaning it could be implemented in everyday healthcare setting, such as a GP surgery.

Because the new reprogrammed cells are produced under the guidance of the patient’s own immune system, there is no need for the immunosuppressant drugs that can be necessary when biological matter is transplanted.

Something similar already exists in a natural extract and it won a Nobel prize in 2009.
https://realityzone.com/product/recharge-autoship/