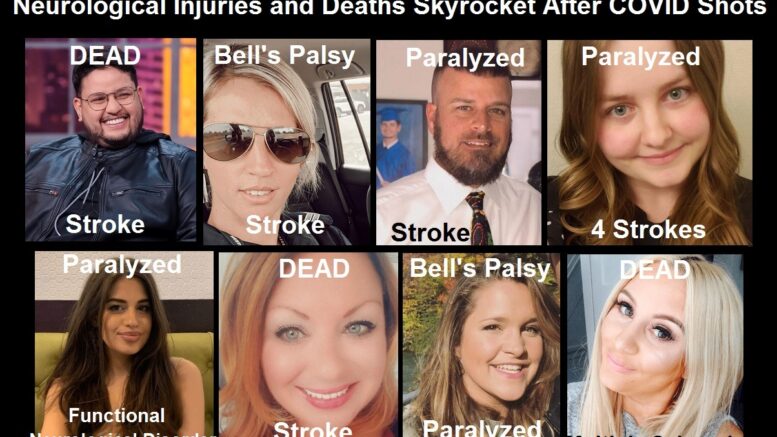 Please Share This Story!
PDF 📄
The biggest story of the century is not Russia invading Ukraine; rather, it is the not-so-silent destruction of peoples health and lives taking place right under our noses. The worst is strokes, which have increased 68,000 percent after taking the mRNA shot as compared to all other vaccines before it. And then there are the ones who have died…

These are the casualties of Technocracy’s war on humanity. ⁃ TN Editor

The Epoch Times published an explosive report today stating that they have received emails that allegedly show that the U.S. Food and Drug Administration (FDA) and National Institutes of Health (NIH) have been quietly studying neurological problems that have appeared in people after they took a COVID-19 vaccine.

Two U.S. agencies have been quietly studying neurological problems that have appeared in people who have had COVID-19 vaccines, The Epoch Times has found.

The Food and Drug Administration (FDA) and National Institutes of Health (NIH) have been conducting separate research projects into post-vaccination neurological issues, which have manifested with symptoms like facial paralysis and brain fog and have been linked in some cases with the vaccines, according to emails reviewed by The Epoch Times.

One attempt to gain understanding of a problem that experts around the world are struggling to understand is being carried out by Dr. Janet Woodcock, who was acting commissioner of the FDA until Feb. 17.

Woodcock, now the FDA’s principal deputy director, has been personally evaluating neurologic side effects from the COVID-19 vaccines since at least Sept. 13, 2021, according to the emails, many of which have not been reported on previously. FDA epidemiologists are also gathering data to look into the issues, according to messages from Dr. Peter Marks, another top FDA official.

A team at the NIH’s National Institute of Neurological Disorders and Stroke (NINDS), meanwhile, started seeing patients reporting vaccine injuries for a study in early 2021 after receiving complaints shortly after the vaccines were made available. A portion of the patients was examined in person at the Bethesda, Maryland, facility.

None of the reviews or studies appear to have been announced, and health officials have said little about them publicly, despite a growing recognition among experts that at least some issues are likely linked to the vaccines. (Full article here. Copy here with no paywall.)

An examination of the FDA and CDC’s Vaccine Adverse Events Reporting System (VAERS) confirms that deaths and injuries due to neurological issues following COVID-19 injections have skyrocketed, when compared to the same adverse events reported following all FDA-approved vaccines for the previous 30 years.

And while none of the U.S. Health Agencies have published or made public their research on these post-vaccine neurological injuries, many medical journals have.

The COVID-19 experimental vaccines, which were given emergency use authorization illegally, should have been immediately pulled from the market at least a year ago.

Will these criminals in the pharmaceutical industry who pay billions of dollars to get their products approved by the FDA ever face justice for the mass murder they have caused?

According to the Cleveland Clinic, “neuropathy” is:

damage or dysfunction of one or more nerves that typically results in numbness, tingling, muscle weakness and pain in the affected area. Neuropathies frequently start in your hands and feet, but other parts of your body can be affected too.

Neuropathy results when nerve cells, called neurons, are damaged or destroyed. This disrupts the way the neurons communicate with each other and with the brain. Neuropathy can affect one nerve (mononeuropathy) or nerve type, a combination of nerves in a limited area (multifocal neuropathy) or many peripheral nerves throughout the body (polyneuropathy). (Source.)

To determine the number of neurological injuries and deaths occurring after COVID-19 vaccines, and then compare them to the previous 30 years’ historical data following all other FDA approved vaccines, we need to perform several searches in VAERS.

So I began by searching for all symptoms in VAERS that contained “neuro” following COVID-19 shots, and it returned 9,799 cases as of the latest data dump into VAERS this past Friday, which goes through February 11, 2022. 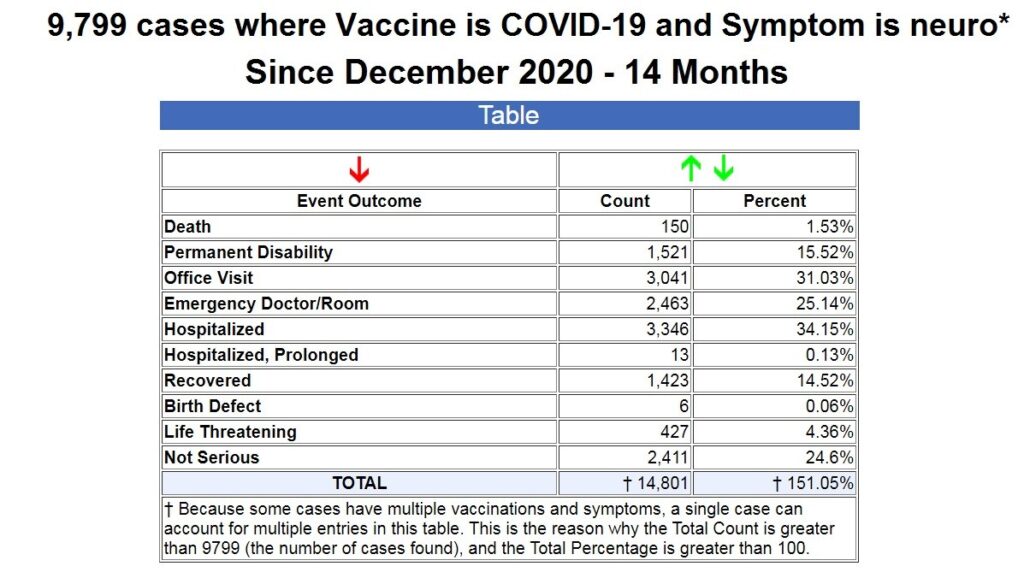 By way of comparison, for the previous 30+ years starting in 1990 when VAERS was established, using the exact same search for every symptom containing “neuro,” we get a result of 8,492 cases for ALL FDA-approved vaccines for the past 30+ years combined. (Source.)

That’s a 2,867% increase of neurological injuries following COVID-19 vaccines as compared to all other vaccines approved by the FDA.

Over 3000% Increase in Cases of Palsy Following COVID-19 Vaccines

There are, of course, other symptoms that are considered neurological conditions that do not contain the word “neuro” in the name of the disease.

Bell’s Palsy, facial paralysis, is one that has been reported frequently following COVID-19 vaccines and is considered a “neurological” injury.

So I searched VAERS for all cases of any kind of “palsy” following COVID-19 vaccines, and it returned a result of 6,717 cases.

As you can see from the table above, in 14 months since the emergency use authorization of the COVID-19 vaccines, out of the 6,717 reported cases, there have been 21 deaths, 645 permanent disabilities, 2,188 ER visits, and 779 hospitalizations. (Source.)

By way of comparison, for the previous 30+ years starting in 1990 when VAERS was established, using the exact same search for every symptom containing “palsy,” we get a result of 4,973 cases for ALL FDA-approved vaccines for the past 30+ years combined. (Source.)

That’s a 3,368% increase in cases of palsy following COVID-19 vaccines as compared to all other vaccines approved by the FDA.

Biggest Story of the Century – People to People TV

One correction on this article. The article from Epoch Times that is referred to in the link that says “Full article here. Copy here with no paywall.) is not in fact free. Epoch Times requires you to subscribe in order to be able to read it.

I find it unbelievable that there is still anyone at all who doesn’t know these FACTS. Worse? Why isn’t anyone fighting mad and ready to pull the technocrats off their ivory perches wherever they live, work or play. Frustration is my daily companion. Having said I find it unbelievable; I was in the local Dollar Store recently to drop off a FedX pouch. The place was buzzing with activity, much more than I’d expect for a Dollar Store. I asked someone in line if there was a sale or something. A response came from behind me. I’m not exaggerating when… Read more »

‹ dysfunction ›
Why the ugly Greek/Latin hybrid when ‹ malfunction › already exists with exactly the same meaning?