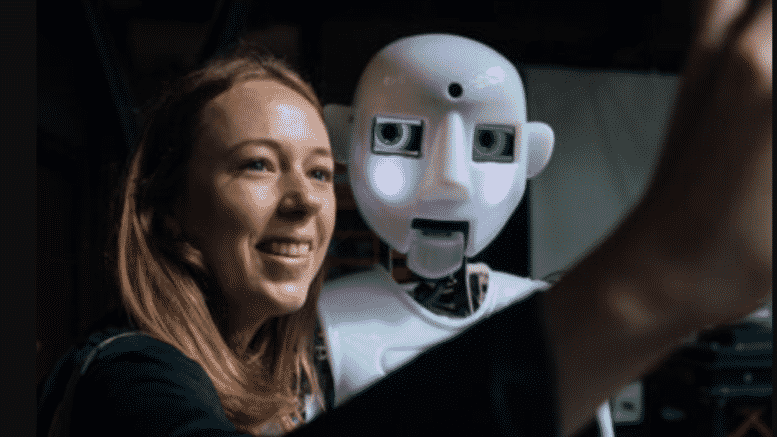 Please Share This Story!
PDF 📄
There is natural affinity to give names to inanimate objects and then to relate to them on an emotional basis. In the 1980s, I had a friend who always named her cars and then spoke affectionately to it by name. When it was time to change cars, it was like a funeral to retire the old and induct the new. No two cars had the same name. ⁃ TN Editor

As robots and and humans grow increasingly closer, we’re starting to form all kinds of relationships with machines.

Are you and your phone platonic or are you turning into a machine yourself?

Nearly 84% of the global population is in possession of a smartphone and they’re becoming something we can’t live without.

Musk’s statement tracks with what roboticists have found in studies about human-robot connections.

Robots as an extension of humanity

Robots are everywhere – in just one morning, a person might use a coffee maker, electric toothbrush and iPhone before leaving the house.

Depending on their function, appearance and experience with the robot, people value robots with varying intensity.

In a study of military personnel and advanced robots, Dr Julie Carpenter found soldiers “frequently described the robot as ‘my hands’ or otherwise as a physical extension of themselves.”

Robots become more than tools to the soldiers they “serve” with – bots are given characteristic names, and the ones that are destroyed in combat are given a soldier’s burials, complete with 21-gun salutes and eulogies.

This concept of projecting human attributes onto an object is called anthropomorphization – and its visible with robots and humans that have been through fewer traumas together than military robots and human soldiers.

In an episode of the Lex Fridman Podcast, roboticist Kate Darling noted that people form a meaningful relationship with the popular robot vacuum cleaner, the Roomba.

People will talk to their Roomba, express empathy for their Roomba when it gets stuck in corners or even come to notice their Roomba has a personality.

In contrast, children were found to be so widely disrespectful to Alexa that Amazon had to add a “Magic Word” feature to try to deter the negative comments.

“We treat them as though they’re alive even though we know perfectly well they’re machines,” Darling said, speaking on helpful robots at the 2017 Aspen Ideas Festival.

We can see positive and negative treatment of robots that don’t make an attempt to look human in the Roomba and the Alexa.

Will humans abuse or respect robots as they look more lifelike?

Robots are MACHINES. They are TOOLS. They are not alive in any manner no matter what the article portrays. So what if a human calls a machine, Mildred, Madge or George. We call our auto vac the little animal and except for the energy running through the chassis it’s not alive, we have no feelings for it and certainly would not bury it should it die. Humans name many inanimate objects simply to have a go-to and familiar label–Alexa is a good example, having already been easily labeled for humans. This article is a huge overstatement supported by the usual… Read more »

We need to carefully screen what the elite say we are – including (perhaps even especially), their poster child, Elon Musk. And we need to be careful to not construct articles like this one around said statements as this gives it the veneer of truth when it very often is far from it. The lie becomes the truth. We are most definitely not cyborgs! And since when is a coffee-maker a robot? 🤖 When did that happen?? I thought a coffee maker was a household appliance. If you add Bluetooth it then becomes a “smart” household appliance. People anthropomorphize many… Read more »

Robots And People Getting Closer Through Romance And Relationships – David Icke

[…] Read More: Robots And People Getting Closer Through Romance And Relationships […]

[…] Read More: Robots And People Getting Closer Through Romance And Relationships […]

Thanks for all your fantastic job Patrick. Very high intellectual, honest and open way to present our times and dangers. I saw the Grand Jury Day 6 video ;-). Incredible work!