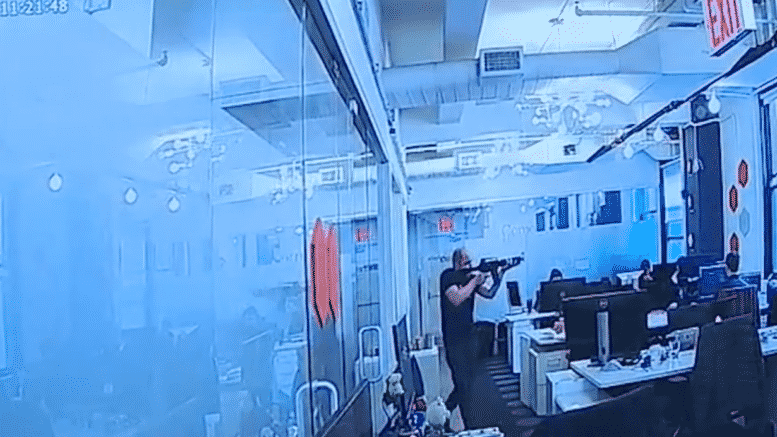 Please Share This Story!
PDF 📄
Technocrats invent because they can, not because there is a demonstrated need to do so. Total surveillance is their opioid, data collection is their addiction. Worse, there are no ethical boundaries or moral standards that keep technocracy in check. ⁃ TN Editor

It’s just a simulation, but it feels real, as the employee carrying out the demonstration inside Actuate offices in Midtown Manhattan walks in carrying a mock AR-15 rifle.

In a matter of seconds, after the employee is visible in the office space, a surveillance camera in the room goes into action.

A green flash pulsates across the monitor set up in another corner of the room after the video management system recognizes a potential threat in the room.

“As you can see it’s pulsing green within about a second or two. That means an alert has been registered,” says Actuate CEO and co-Founder Sonny Tai. “Our AI model has made a detection and sent an alert to video management systems.”

“We initially built our company as a gun detection company in response to a lot of active shooter threats that happened over the years,” Tai said.

After the Las Vegas shooting in 20017, Tai who is a former captain in the US Marine Corps, surveyed law enforcement agencies across the country asking what could be done.

“A common refrain heard from a lot of them was a wish security cameras could automatically identify threats,” he said.

Most business or office buildings or public spaces already have cameras.

Actuate doesn’t actually install any new devices, instead, the company connects cameras online in an encrypted way and then runs its algorithms that are programmed to search for problems.

“99% plus of cameras are used in a very forensic way. Which means that if something bad happens, they come back and review the footage hours or even days later and try to catch a bad guy,” Tai said. “What we’re looking to do is in a non-privacy intrusive way, so we don’t track any facial recognition, or biometrics or PI, but be able to identify potential indicators of threats to safety and security, and send these alerts out in real-time to people who would need to respond.”

It could be at a used car lot or construction site at night with cameras programmed to notify when a suspicious person walks near a fence.

Or think back to our first example.

Ellie walks into an office carrying a gun, after it’s detected, a notification is sent to security teams or anyone watching a bank of monitors. Alerting them as to when and where the threat is unfolding.

“This is something that they’ll get an alert within a couple of seconds to be able to pull this up and you’ll be able to see the bounding box drawn around the weapon that’s detected.”

Surveillance Cameras Use AI To Detect Guns - All View News

The greatest threat right now to our safety & security resides in the White House!