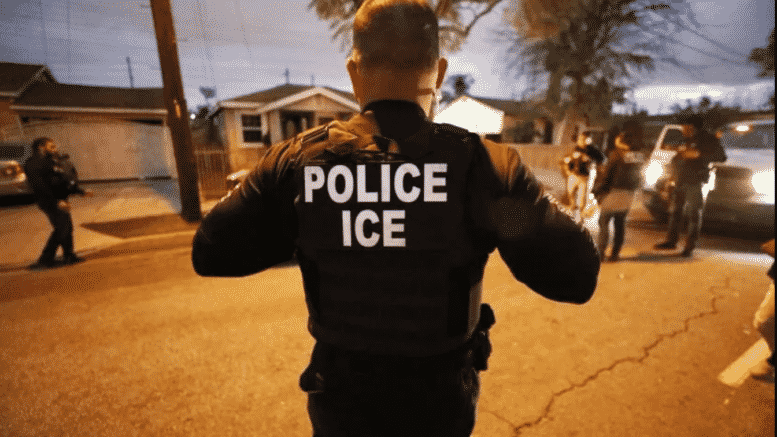 Please Share This Story!
PDF 📄
They told us that “if you have nothing to hide” then there is no problem in examining you. Now, in a shroud of secrecy ICE hides everything, and was discovered only after gaining information from hundreds of Freedom of Information Act requests. ⁃ TN Editor

Immigration and Customs Enforcement has crafted a sophisticated surveillance dragnet designed to spy on most people living in the United States, without the need for warrants and many times circumventing state privacy laws, such as those in California, according to a two-year investigation released Tuesday by the Georgetown Law Center on Privacy & Technology.

Over the years, privacy law experts and civil rights activists and attorneys have accused ICE of overreach in its surveillance tactics directed at immigrants and Americans alike, but the Georgetown report paints a picture of an agency that has gone well beyond its immigration enforcement mandate, instead evolving into something of a broader domestic surveillance agency, according to the report, called “American Dragnet: Data-Driven Deportation in the 21st Century.”

ICE officials did not respond to a Times request for comment.

The report outlines the extent to which ICE has gone to form a large-scale surveillance system that has reached into the lives of ordinary people living in the U.S. Skirting local laws intending to protect individuals’ privacy, the agency has turned to third-party outfits — utility companies, private databases and even the department of motor vehicles in some states — to amass a trove of information from hundreds of thousands of Americans and immigrants to target people for deportation.

ICE spent an estimated $2.8 billion between 2008 and 2021 on surveillance, data collection and data-sharing initiatives, according to the Georgetown report. The scale of ICE surveillance came as a shock to the report’s authors.

“I was alarmed to discover that ICE has built up a sweeping surveillance infrastructure capable of tracking almost anyone, seemingly at any time. ICE has ramped up its surveillance capacities in near-complete secrecy and impunity, sidestepping limitations and flying under the radar of lawmakers,” said Nina Wang, a policy associate at the Center on Privacy & Technology and a co-author of the study.

Wang said that even “sanctuary” states such as California are affected by the agency’s sweeping dragnet, using third parties — such as utility companies and other non-law enforcement outfits — to amass data on hundreds of thousands of Californians.

“Even in states that have tried to protect immigrants’ data, ICE has found ways to sidestep some of the strongest restrictions on the kinds of records that it can access, as well as regulations on when and how and on whom it can pull this information,” she said. “As a result, anyone’s information can end up in the hands of immigration enforcement simply because they’ve applied for driver’s licenses, driven on the roads or signed up with their local utilities to get access to heat, water and electricity.”

Formed in the wake of the Sept. 11 attacks, ICE was given sweeping powers to fight terrorism and enforce immigration law. Since then, the agency has collected data on hundreds of millions of Americans largely without much oversight or accountability, often crossing legal and ethical lines to amass people’s personal information to weave a vast surveillance system, according to the Georgetown report.

For years, civil liberty and immigrant rights groups, such as the American Civil Liberties Union, have exposed and pushed back against ICE’s massive surveillance powers, launching lawsuits against the agency, with some success.

Researchers compiled the report from the results of hundreds of Freedom of Information Act requests.

Among other findings, the report documents that ICE has driver’s license data for 3 in 4 adults living in the U.S.; has scanned at least 1 in 3 of all adults’ driver’s licenses with face recognition technology; can track the movement of vehicles in cities that are home to nearly 3 in 4 adults; and can locate 3 in 4 adults through their utility records.

“Formed in the wake of the Sept. 11 attacks, ICE was given sweeping powers to fight terrorism and enforce immigration law.” How many times do intelligent people have to repeat–Once the power of authority is given to any entity or individual it is never given back without force. The word ’emergency’ has entered our political language as part of ‘national security’, the central rallying phrase for SECRET DOINGS and keeping the public in the dark. ICE increased its power-creep over time becoming the problem not the solution. ICE was given 20-yrs of no-oversight and working in secret as they enjoyed… Read more »

[…] Immigration Officials Created Network That Can Spy On Majority Of Americans […]