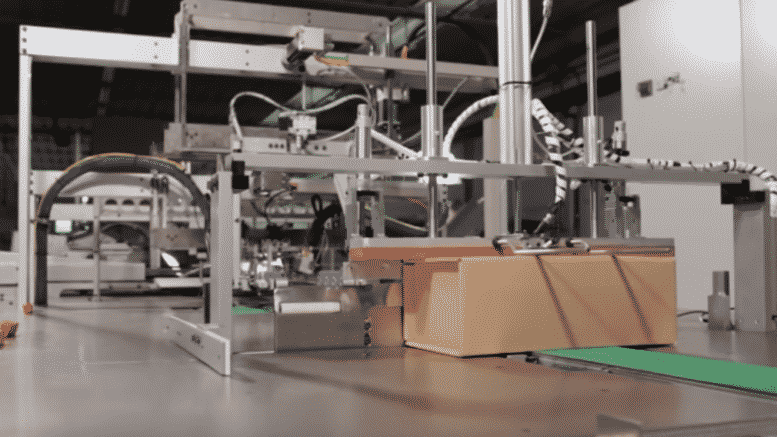 The new machines, known as the CartonWrap from Italian firm CMC Srl, pack much faster than humans. They crank out 600 to 700 boxes per hour, or four to five times the rate of a human packer, the sources said. The machines require one person to load customer orders, another to stock cardboard and glue and a technician to fix jams on occasion.

Including other machines known as the “SmartPac,” which the company rolled out recently to mail items in patented envelopes, Amazon’s technology suite will be able to automate a majority of its human packers. Five rows of workers at a facility can turn into two, supplemented by two CMC machines and one SmartPac, the person said.

Amazon is not alone in testing CMC’s packing technology. JD.com Inc and Shutterfly Inc have used the machines as well, the companies said, as has Walmart Inc, according to a person familiar with its pilot.

“A ‘lights out’ warehouse is ultimately the goal.”

But there’s a catch. They have to start their own delivery business instead.

The retailer says it will fund startup costs up to $10,000, as well as the equivalent of three months of the former employee’s last gross salary, to give the employees the ability to get their new business off the ground without worrying about a break in pay.

Amazon said last year that people were able to start their own delivery business with only $10,000. At the time, military veterans were able to get that $10K reimbursed, as Amazon was investing a million into a program that funded their startup costs.

Employees — or any other entrepreneur — who wants to become a delivery partner, are able to lease customized blue delivery vans with the Amazon smile logo on the side, and take advantage of other discounts, including fuel, insurance, branded uniforms and more.

Delivery partners, meanwhile, could earn as much as $300,000 in annual profit by growing their fleet to 40 vehicles, Amazon claims. The company said last year it expected that hundreds of small business owners will come to hire tens of thousands of drivers across the U.S.

It’s clear where this is headed: Amazon will directly compete with UPS and FedX.

If Amazon can offer retailers reduced costs and faster delivery, why wouldn’t businesses take it?

Consider what happened to me two weekends ago. I was at Arches and Canyonlands National Parks, staying at hotel in Moab, Utah.

A star tracker that I use for photographing the night sky broke. I wanted another ASAP and paid $50 extra for overnight delivery. I placed the order Thursday morning at 9:00 AM. I should have received it Friday, but didn’t.

UPS does not deliver on Saturday. Prime does. I did not get my star tracker until Monday. I lost three days of being able to photograph the night sky the way I wanted.

These camera stores offer free 2-day shipping on most items.

If and when Amazon offers a deal to such places, they may be able to free one day shipping or save money on two-day shipping.

UPS is union-based with union costs and pension costs.

UPS is the single largest employer in the Teamsters Union. The UPS contract is the largest collective bargaining agreement in North America.

UPS will not be able to compete with Amazon on costs. UPS is doomed.

so a stinking union is erased. Now that is progress. teamsters beat up my uncle. Time is way past for them top get what they deserve…justice.

Error in your article. UPS does deliver on Saturdays. They have for over a decade. They are not full routes but they are delivering for S-1 or higher weekend routes. If you didn’t receive it via UPS it’s due to your own neglect to not ask for Saturday delivery.

I live near a Volvo truck manufacturing plant and we are starting to see a lot of trucks (tractor trailers) with the Amazon “arrow” logo rolling off the assembly line.